Exclusive: Montreal police may hope to just nail the “torch,” the culprit who hurled a fire-bomb into the home of ex-Israeli spy Ari Ben-Menashe. But to solve the mystery, they may have to delve into Ben-Menashe’s complex intelligence ties, including his hostile relations with his old superiors in Israel, writes Robert Parry.

Montreal police are providing few details about their investigation into last Sunday night’s fire-bombing of an upscale home belonging to ex-Israeli intelligence officer Ari Ben-Menashe, as authorities sift through both the evidence collected from the ashes and the wide array of possible suspects.

Indeed, when I spoke with a police spokesman on Friday, all he offered was an outdated statement from Monday about the city assessing the risk of the gutted structure before collecting evidence. However, by Friday, the building had been taken down; the arson squad had scoured the wreckage for residue of the bomb’s accelerant; Ben-Menashe had been allowed to pick through the ashes looking for any personal items that might have survived; and the wreckage had been hauled away in dumpsters. 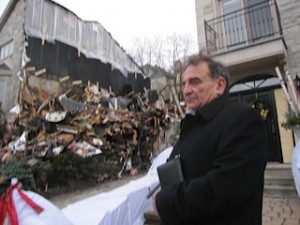 Ex-Israeli intelligence officer Ari Ben-Menashe standing before the wreckage of his destroyed home in Montreal on Dec. 5, 2012. (Photo by Robert Parry)

This past week in interviews with me as he worked to rebuild his life, Ben-Menashe, 61, was reluctant to finger any specific suspect, but suggested that the attack may have originated with the Israeli government, which has viewed its former intelligence officer over the past two decades as something between an irritant and a threat.

And, it appears that Ben-Menashe has risen again on the Israeli government’s list of concerns. If the bomb had not dramatically disrupted his life on Sunday night, he was planning to fly to Washington on Monday and accompany a senior Israeli intelligence figure to an interview with me.

The bombing not only prevented Ben-Menashe from making the trip, but he said it unnerved the other intelligence official who concluded that the attack was meant as a message from Israeli authorities to stay silent about the historical events that he was expected to discuss.

The fire also destroyed many of Ben-Menashe’s documents, his home computer and his personal records, including his old and current passports which provided something of a chronology of his decades traveling the globe.

So, if the Israelis were behind the attack, they would have accomplished many of their goals: intimidating Ben-Menashe, shutting down possible new disclosures of Israeli misconduct from the other intelligence veteran, and destroying records that would have helped Ben-Menashe prove whatever statements he might make.

In May 1991, Israel made a stab at capturing their rogue agent when Ben-Menashe was scheduled to fly from Australia to Washington to provide testimony to the U.S. Congress about national security scandals that implicated top Israeli officials and senior Republicans, including then-President George H.W. Bush.

Shortly before Ben-Menashe’s trip, a U.S. intelligence source tipped me off to a plan in which U.S. authorities would deny Ben-Menashe entrance at Los Angeles and then put him aboard a flight to Israel where he would have stood trial for exposing state secrets.

After getting the tip, I contacted congressional investigators who planned to question Ben-Menashe. One later called me back and said the Bush-41 administration was balking at giving a guarantee of safe passage for Ben-Menashe to Washington. It was suggested that I contact him and recommend that he delay his flight, which I did.

When I reached him in Australia, he was just about to leave for the airport, but agreed to postpone his flight until he got an all-clear from the congressional investigators, who finally received a promise from the Bush-41 administration that they would not deport Ben-Menashe to Israel. Ben-Menashe then flew to Washington.

Instead, Israel settled on a public relations campaign to destroy Ben-Menashe’s credibility by providing derogatory information to American journalists with close ties to Israeli intelligence. That campaign proved remarkably effective even as many of Ben-Menashe’s factual claims checked out or at least were not disproven. [For details, see Robert Parry’s America’s Stolen Narrative.]

Ben-Menashe also could be his own worst enemy, often compounding his media problem by treating journalists in a high-handed manner, either due to his suspicions of them or his arrogance.

In the 1990s, Ben-Menashe gradually rebuilt his life in Canada, marrying a Canadian woman and becoming a citizen. But he also surrounded his far-flung business activities in secrecy and got involved with some controversial international figures, such as Zimbabwe’s leader Robert Mugabe.

In recent years, Ben-Menashe has conducted his international consulting business at Dicksen and Madson in a wide variety of global hotspots, including conflict zones such as Mali, Sudan and Congo. He also has maintained ties to various intelligence services which are eager to receive his briefings about areas where traditional diplomats and even spies are hesitant to go.

Because of those complex business dealings and the international intrigue that has surrounded them, the Israeli government is only one of many possible suspects in last Sunday’s fire-bombing. Any number of Ben-Menashe’s enemies might have had motive to fire-bomb his house and send him fleeing into the night. 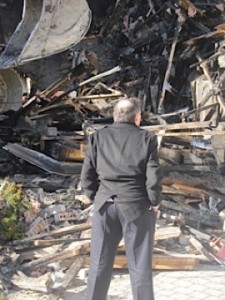 Ari Ben-Menashe gazing upon the wreckage of his house in Montreal on Dec. 6, 2012. (Photo by Robert Parry)

During the 1980s, Ben-Menashe was something of a star intelligence officer for Israel assigned to a special unit of Israeli military intelligence. An Iraqi Jew born in Iran and an emigre to Israel as a teenager, Ben-Menashe was a young operative who assisted in rebuilding Israel’s strategic ties to Iran after the Islamic Revolution in 1979.

Traveling the world, Ben-Menashe brokered Israeli-sponsored arms sales to Iran during its war with Iraq in the 1980s and handled sensitive assignments including efforts to counter U.S.-supported military shipments to Iraq. He turned up as a shadowy figure on the fringes of the Iran-Contra scandal, which is where I first heard about him as I was covering that story for the Associated Press and Newsweek.

But I never could track him down until late 1989 when he was arrested in the United States on charges of selling military aircraft to Iran. Confined to the federal prison in Lower Manhattan, he consented to an interview and I flew from Washington to New York to speak with him.

During that prison interview, Ben-Menashe offered me startling new information about the Iran-Contra scandal, which I thought that I knew quite well. However, my first task was to verify who this brash Israeli was. Initially, the Israeli government dismissed him as an “impostor.” However, I was able to obtain official Israeli letters of reference describing his decade-long work for the External Relations Department of the Israel Defence Forces.

Confronted with that evidence, Israeli officials changed their story, admitting that Ben-Menashe indeed had worked for a branch of the IDF’s military intelligence but labeling him “a low-level translator.” But the letters described Ben-Menashe’s service in “key positions” and said he handled “complex and sensitive assignments.”

Despite this evidence that Israeli officials had first lied and then retreated to a new cover story the Bush-41 administration and the Israeli government managed to galvanize friendly journalists who went out of their way to discredit Ben-Menashe as a compulsive liar. [For details about one of the key denouncers of Ben-Menashe, see Consortiumnews.com’s “Unmasking October Surprise ‘Debunker’”.]

In fall 1990, Ben-Menashe convinced a New York jury that he indeed had been working on official Israeli business in his transactions with Iran and he was acquitted of all charges. After that, Ben-Menashe continued to provide testimony about secret dealings involving Republicans and the Israeli government. He gave information to investigative journalist Seymour Hersh about Israel’s top-secret nuclear program and identified British media mogul Robert Maxwell as an Israeli spy.

Perhaps Ben-Menashe’s most controversial claim was that he and other Israeli intelligence officers had assisted the Republicans in brokering a deal with Iran’s Islamic regime of Ayatollah Ruhollah Khomeini in 1980 to hold 52 American hostages until after the U.S. election to ensure President Jimmy Carter’s defeat. As a result of this so-called October Surprise caper, the hostages were not released until Jan. 20, 1981, immediately after Ronald Reagan was sworn in as U.S. President, Ben-Menashe said.

Yet, if the American public ever came to believe that the Israeli government had manipulated the outcome of a U.S. presidential election to put in a favored candidate that could have severely damaged Israel’s crucial alliance with the United States. So, for both the Israelis and the Republicans, the goal of destroying or silencing Ben-Menashe became an important priority.

After achieving success in marginalizing Ben-Menashe by 1993 at least in the eyes of the Washington Establishment — the Israelis seemed to view him as a declining threat, best left alone. He was able to pick up the pieces of his life, creating a second act as an international political consultant and businessman arranging sales of grain.

But his renewed efforts to finally prove the truthfulness of his earlier claims, especially regarding the October Surprise charges, may have suddenly elevated him again on Israel’s threat chart.

Though the Montreal police are understandably hesitant to climb down the rabbit hole into Ben-Menashe’s mysterious world of espionage and historical mysteries, they may ultimately have no choice.

2 comments for “Who Bombed Ben-Menashe’s House?”