Thirty-four U.S. nuclear plants sit downriver from dams whose collapse could cause a nuclear accident along the lines of the Fukushima disaster in Japan. But the Nuclear Regulatory Commission has withheld evidence of the threat, writes William Boardman.

The likelihood was very low that an earthquake followed by a tsunami would destroy all four nuclear reactors at the Fukushima nuclear power plant, but in March 2011, that’s what happened, and the accident has yet to be contained.

Similarly, the likelihood may be low that an upstream dam will fail, unleashing a flood that will turn any of 34 vulnerable nuclear plants into an American Fukushima. But knowing that unlikely events sometimes happen nevertheless, the nuclear industry continues to answer the question of how much safety is enough by seeking to suppressor minimize what the public knows about the danger. 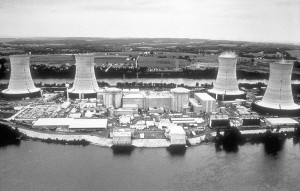 The Nuclear Regulatory Commission (NRC) has known at least since 1996 that flooding danger from upstream dam failure was a more serious threat than the agency would publicly admit. The NRC failed from 1996 until 2011 to assess the threat even internally.

In July 2011, the NRC staff completed a report finding “that external flooding due to upstream dam failure poses a larger than expected risk to plants and public safety” [emphasis added] but the NRC did not make the 41-page report public.

Instead, the agency made much of another report, issued July 12, 2011 “Recommendations for Enhancing Reactor Safety in the 21st Century,” sub-titled “The Near-Term Task Force Review of Insights from the Fukushima Dai-Ichi Accident.”

Barely four months after the continuing accident began in Japan, the premature report had little to say about reactor flooding as a result of upstream dam failure, although an NRC news release in March 2012 would try to suggest otherwise.

That 2012 news release accompanied a highly redacted version of the July 2011 report that had recommended a more formal investigation of the unexpectedly higher risks of upstream dam failure to nuclear plants and the public. In its release, the NRC said it had “started a formal evaluation of potential generic safety implications for dam failures upstream” including “the effects of upstream dam failure on independent spent fuel storage installations.”

In a letter dated Sept. 14 and made public the same day, Richard Perkins, an engineer in the NRC’s Division of Risk Analysis, wrote Inspector General Hubert Bell, describing it as “a violation of law” that the Commission “has intentionally mischaracterized relevant and noteworthy safety information as sensitive, security information in an effort to conceal the information from the public.

“This action occurred in anticipation of, in preparation for, and as part of the NRC’s response to a Freedom of Information Act request for information concerning the generic issue investigation on Flooding of U.S. Nuclear Power Plants Following Upstream Dam Failure.

“Portions of the publically released version of this report are redacted citing security sensitivities, however, the redacted information is of a general descriptive nature or is strictly relevant to the safety of U.S. nuclear power plants, plant personnel, and members of the public.

“The Nuclear Regulatory Commission staff has engaged in an effort to mischaracterize the information as security sensitive in order to justify withholding it from public release using certain exemptions specified in the Freedom of Information Act.

“The Nuclear Regulatory Commission staff may be motivated to prevent the disclosure of this safety information to the public because it will embarrass the agency. The redacted information includes discussion of, and excerpts from, NRC official agency records that show the NRC has been in possession of relevant, notable, and derogatory safety information for an extended period but failed to properly act on it. Concurrently, the NRC concealed the information from the public.”

The Inspector General has not yet acted on the complaint.

Huffington Post picked up the story immediately as did the Union of Concerned Scientists and a number of online news sites. The mainstream media showed little or no interest in a story about yet another example of the NRC lying to the public about the safety of nuclear power plants.

An NRC spokesman suggested to HuffPo that the report’s redactions were at least partly at the behest of Homeland Security. A second NRC risk engineer, who requested anonymity, said that Homeland Security had signed off on the report with no redactions. As HuffPo noted:

“If this were truly such a security concern, however, it would be incumbent on the agency to act swiftly to eliminate that threat, the engineer stated. As it is, the engineer suggested, no increased security actions have been undertaken.”

This same engineer expressed serious misgivings, shared by others in and out of the NRC, that a nuclear power plant in Greenville, South Carolina, has been at risk from upstream dam failure for years, that the NRC has been aware of the risk, and that the NRC has done nothing to mitigate the risk. In the redacted report, the NRC blacked out passages about this plant.

South Carolina’s Oconee plant on Lake Keowee has three reactors, located 11 miles downstream from the Jocassee Reservoir, an 8,000 acre lake. As HuffPo put it: “the Oconee facility, which is operated by Duke Energy, would suffer almost certain core damage if the Jocassee dam were to fail. And the odds of it failing sometime over the next 20 years, the engineer said, are far greater than the odds of a freak tsunami taking out the defenses of a nuclear plant in Japan.

“’Although it is not a given that Jocassee Dam will fail in the next 20 years,’ the engineer added, ‘it is a given that if it does fail, the three reactor plants will melt down and release their radionuclides into the environment.’”

When the NRC granted an operating license to the Oconee plant in 1973, danger from upstream dam failure was not even considered, never mind considered a threat against which some protection was needed. The NRC and the plant’s owner both say the Jocassee Dam is not an immediate safety issue. Oconee’s initial license was for 40 years. It is now the second plant in the U.S. that the NRC has granted an extended license for another 20 years.

The Union of Concerned Scientists, which says it is neither pro-nuke nor anti-nuke, but committed to making nuclear power as safe as possible, has considered the risk factors for Oconee. The NRC wrote in 2009 that “a Jocassee Dam failure is a credible event and in 2011 wrote that “dam failures are common” and that since 1975 there have been more than 700 dam failures, 148 of them large dams 40 feet or more high. The Jocassee Dam is 385 feet high.

For a dam like Jocassee, the NRC calculates the chance of failure at 1 in 3,600 per year or 1 in 180 each year for the extended license. NRC policy, when enforced, requires nuclear plant owners to mitigate any risk that has a 1 in 250 per years chance of occurring.

Oconee has three nuclear reactors, each of which is larger than the reactors at Fukushima, and so has more lethal radioactive potential. Duke Energy reported its own upstream dam failure calculations to the NRC no later than 1996 and the NRC has responded by requiring no safety enhancements to address the threat.

Noting that the upstream dam failure risk does not take into account possible earthquakes or terrorist attacks, the Union of Concerned Scientists wrote:

“The 34 reactors of concern are downstream from a total of more than 50 dams, more than half of which are roughly the size of the Jocassee dam. Assuming the NRC’s failure rate applies to all of those dams, the probability that one will fail in the next 40 years is roughly 25 percent,a 1 in 4 chance.”