Three disarmament radicals who snuck into the Y-12 nuclear weapons complex last summer are preparing for their February 2013 trial, and face the prospect that any mention of nuclear weapons will be forbidden.

Y-12 is the 811-acre site in Oak Ridge, Tennessee, that’s been building H-bombs and contaminating workers and the environment since 1943. On July 28, Sister Megan Rice, Michael Walli and Greg Boertje-Obed snipped through fences and walked up to the new Highly Enriched Uranium Materials Facility building. They unfurled banners, spray-painted the building with phrases such as “Woe to the empire of blood,” poured blood, prayed and broke bread. 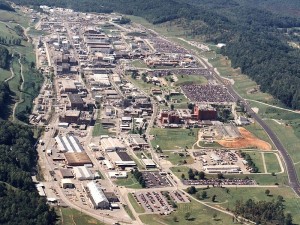 Now they face felony charges that carry a maximum of $500,000 in fines and 15 years in prison. Additionally, in what looks like an attempt to scare them into pleading guilty now, federal prosecutors have mentioned bringing two heavier charges, including sabotage “during wartime,” which together carry up to 50 years imprisonment.

As with previous cases of symbolic damage to nuclear war systems, a kangaroo court is being arranged in advance. If the government gets its way again, the trial judge will keep facts about nuclear weapons away from the jurors and make sure that questions about the bomb’s outlaw status are left out of jury instructions. Instructions are the juror’s marching orders, the last thing they hear before starting deliberations.

Volunteer defense attorneys have submitted a detailed memo to the contrary, arguing that interference with and even defacing and damaging nuclear war plans is a legitimately excusable “lesser harm” that prevents an indisputably greater one. These lawyers argue that forbidding a defense of necessity violates protesters’ rights.

Citing case law from 2005, 1994, 1980 and 1976, they note, “In a criminal case it is reversible error for a trial judge to refuse to present adequately a defendant’s theory of defense,” and, “where a defendant claims an affirmative defense [necessity, crime prevention, etc.], and that ‘defense finds some support in the evidence and in the law,’ the defendant is entitled to have the claimed defense discussed in the jury instructions.”

It’s easy to show that necessity defenses are relevant, the memo notes, since the “burden is not a heavy one” and is met “even when the supporting evidence is weak or of doubtful credibility.”

Nevertheless, as the prosecutor’s motion points out, “Courts have precluded defendants from presenting any evidence in support of such defenses at trial, including expert testimony.” Indeed, gag orders in similar cases have been upheld by the 9th, 8th, 7th and 11th U.S. Circuit Courts of Appeal.

Judges and prosecutors have in fact placed nuclear weapons and war planning beyond the reach of the law, unlike assault rifles, poison gas or other contraband, as if H-bombs were sacrosanct, unquestionable, too precious to be addressed by mere mortals.

In this case, Magistrate Shirley and Mr. Killian know that if jurors learn about the effects of nuclear attacks, about the law against planning massacres, and about U.S. plans for nuclear warfare, they would likely acquit the defendants.

The U.S. Attorney’s motion even confesses, “[we] do not suggest that the deployment of nuclear armament systems does not violate international law, but merely that Congress has power to protect government property.”

If a gag order from Magistrate Shirley follows suit with earlier nuclear weapons protest cases, the accused will again be denied the right to defend themselves. With the world clamoring for nuclear abolition, it won’t be the defense that’s irrelevant then, but the court system.

John LaForge is co-director of Nukewatch, a nuclear watchdog group in Wisconsin, and edits its Quarterly.