On Veterans Day, Americans make a point of thanking men and women who have served in the U.S. Armed Forces. But this appreciation has the effect of shielding today’s perpetual warfare from the critical examination it deserves, writes former Marine Matthew Hoh.

I get lots of notes thanking me for my service on Veterans Day. I am grateful and appreciative. My friends, both veterans and active duty service members, receive the same affections of respect and esteem and, of course, value those sentiments.

There comes a time, however, when a line is breached. I have difficulty receiving a message from a teacher thanking me for what I have done for my country. I blush at the handshakes, emails, Facebook posts, Twitter tweets and banners from police officers, firefighters, nurses, nonprofit organizers and volunteers, clergy, utility workers and good parents; people who do more on a daily basis for our nation than I have ever done. 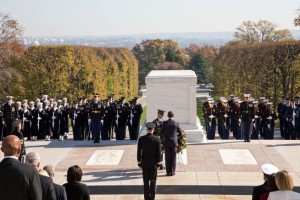 President Barack Obama places a wreath at the Tomb of the Unknowns at Arlington National Cemetery in Arlington, Va., in honor of Veterans Day, Nov. 11, 2012. (Official White House Photo by Pete Souza)

Please understand me. What these men and women do everyday contributes more to the well being and welfare of this nation than anything done overseas over the last decade in our country’s name. (With the exception of a relatively small, dedicated cadre who have actually dealt with the several dozen or few hundred terrorists that truly threaten the United States.)

What they did, they did for one another and they would do so again. They deserve the admiration of a nation for their performance and their conduct in situations impossible to understand unless you were there. However, their performance in their duties must be divorced and recognized separately from the misbegotten and politically expedient narrative that we live in a safer America today because of an invasion of Iraq and an 11-year occupation of Afghanistan.

What allows for this unquestioning acceptance of a patriotic and romantic yet specious narrative? Maybe it is the fear resident from the horror of the September 11 attacks? An act carried out by what history will detail to have been a band of madmen and not a force worthy of a war or the designation as an existential threat.

Maybe it is a form of collective guilt, shame or inferiority for not having served? This attitude within the American public has manifested itself in elected officials and prevents questioning, critical thought or oversight pertaining to anything military in Washington, DC.

Maybe it is a fawning media? Desperate for ratings, pressured by competition and needful of access, the media has been easily suckered by the world’s largest and best-trained public relations machine, run by the Pentagon.

Maybe it is even a growth in the general knowledge and understanding of war by the American public? I mean, who needs a draft, because, thanks to video games: “There’s a soldier in all of us.”

Whatever the reason, it is tragic and absurd that we confuse the hard work and selfless sacrifice of most veterans with overly simplistic, factually lazy and politically manipulative stories of freedom and liberty, of defense of economic prosperity, or of holding back barbarians at our gates.

I am quite certain Godwin’s Law is in effect as many read this, but for every analogy or comparison to World War II and Nazi Germany in modern American foreign policy discourse, a referencing of the tragedies of Korea, Vietnam, Lebanon and Somalia would be more appropriate. For these conflicts are not just closer in time and generation, but are more similar in their substance and form, and in their loss and inconclusiveness, to the wars in Afghanistan and Iraq than the Good War is to the Afghan and Iraq Wars.

Do not be misled, we lost the Iraq War and we are losing the Afghan War. Not that either of those wars were worth winning, which, of course, is little consolation to the families of the dead and maimed.

Despite these losses; despite the disgraces of Generals McChrystal, Caldwell, Petraeus and Allen, all undone by vainglorious stupidity; despite the level of the Pentagon’s fiscal profligacy, one without equal in the modern world; and despite a suicide epidemic that only the satirical publication The Onion seems willing to take head on, the military is the most widely respected institution in the United States.

Veterans deserve a great share of the responsibility for such foolishness. For too long we have been placed on a pedestal, immune from criticism or investigation, in some cases receiving adoration and reverence approaching clerical or pontifical status among the American public.

Have we, those no longer in service, met our obligations to those still serving and to those who will serve? Have we honestly and critically examined our most recent histories and reported, candidly, what we saw, what we did, what we accomplished, whether or not it was worth it, and what it meant?

Maybe it is too soon for such introspection. Many of the more poignant, sincere and astute recollections and summaries of war have been published decades after the homecomings. Perhaps it is just too soon for many of us. However, as a friend of mine reminds me, for veterans to not speak genuinely, but rather to silently and graciously accept accolades of unwarranted praise and glory, ensures propaganda lives on as history.

Maybe in time my generation will produce memoirists like Kotolwitz, Sledge or Fussel, novelists like Vonnegut, Heller or Mailer, or films like Paths of Glory, MASH or The Deer Hunter. With a few exceptions, most reporting of the Afghan and Iraq wars by veterans has been simply that: reporting.

This absence of critical examination and of serious questioning of the wars by veterans has allowed for an infirmity to take hold within the American people that disallows for questioning warriors and, to the benefit of a few, expedites policies of perpetual war.

Thank you for your sympathies on the hardship of war, they are right and deserved. However, please truly consider the merit of crediting the wars of Afghanistan and Iraq for the continuing liberties, freedoms and welfare of the United States. I did not see any al Qaeda in Afghanistan or weapons of mass destruction in Iraq, nor do I know many Afghans who are benefiting from Karzai’s kleptocracy or Iraqis who are grateful for the horrors of civil war.

Rather than receive thanks undeserved, I would prefer we hold ourselves accountable for our mistakes and our failures. Until that time, I will read the below poem each Veterans Day. I have seen more of what it speaks of in war and its aftermath than I ever did of any freedom or liberty.

SUICIDE IN THE TRENCHES

I knew a simple soldier boy
Who grinned at life in empty joy,
Slept soundly through the lonesome dark,
And whistled early with the lark.

In winter trenches, cowed and glum,
With crumps and lice and lack of rum,
He put a bullet through his brain.
No one spoke of him again.

You smug-faced crowds with kindling eye
Who cheer when soldier lads march by,
Sneak home and pray you’ll never know
The hell where youth and laughter go.

Matthew Hoh is a Senior Fellow at the Center for International Policy (www.ciponline.org). Matthew formerly directed the Afghanistan Study Group, a collection of foreign and public policy experts and professionals advocating for a change in U.S. strategy in Afghanistan. Matthew has served with the U.S. Marine Corps in Iraq and on U.S. Embassy teams in both Afghanistan and Iraq. He resides in North Carolina. [This article originally appeared at the HuffingtonPost and is republished with the author’s permission. The link is http://www.huffingtonpost.com/matthew-hoh/a-few-days-after-veterans-day_b_2123758.html ]

9 comments for “Separating War from the Vets”