Environmentalists and the oil industry continue to clash over the Keystone pipeline and the plan to pump Canadian tar sands through the U.S. to the Gulf of Mexico, amid new reports on the plan’s environmental harm, reports William Boardman.

In Washington, D.C., the day before the 2012 election, an Occupy action by dozens of protesters blocked the entrance to McKenna Long and Aldridge, a major law firm with the oldest government contract practice in the United States. The firm also represents the Canadian corporation TransCanada, which is seeking U.S. government permission to build the Keystone XL pipeline from Alberta, Canada, to the Gulf Coast.

Organizers called this demonstration a “Tar Sands Solidarity Action,” in support of  the Tar Sands Blockade of the KeystoneXL pipeline now under construction in East Texas. Police arrested four people for refusing to move from in front of TransCanada’s lobbyist’s front door. 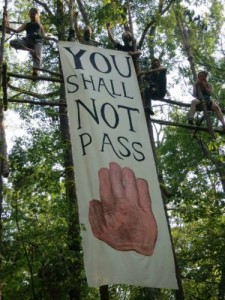 A banner hung from a tree in East Texas as part of the protest against the Keystone pipeline, which is intended to carry tar sands from Canada to the Gulf Coast.

Increased non-violent direct action seems to be a harbinger of mounting pressure by environmentalists across the country to persuade President Barack Obama to shut down the Keystone XL pipeline altogether for the sake of the health of the planet.

The President is also under pressure from Canadian officials and the oil industry to give the $7 billion, 1,700-mile pipeline project a green light for the sake of the health of the global economy. Industry supporters continue to claim the project  “will create 20,000 shovel-ready jobs,” even though TransCanada chief executive Russ Girling admitted a year ago that the number is false, about three times too high.

That same day before the Nov. 6 election, the environmental side of the argument got scientific reinforcement when a Canadian newspaper reported that government scientists had confirmed 2010 research showing that tar sands contamination was increasing in the region’s precipitation and snowpack. The article went on to describe how Environment Canada, the Canadian environmental protection agency, had worked to suppress the information and prevent scientists from discussing it with reporters or even at scientific gatherings.

In 2011, Environment Canada tried to suppress its own report on widespread river pollution, by stamping it secret. After an access-to-information lawsuit that took six months, the report was released showing the Canadian government’s own projections of the devastating impact of tar sands development on river systems, natural habitats, and the release of greenhouse gases. The Canadian Association of Petroleum Producers lobbying group said it didn’t see any “new” information in the report.

The President is expected to announce his decision about the Keystone pipeline in early 2013, prompting environmental groups to mount new mass actions now. On Sunday, Nov. 18 in Washington, 350.org is organizing a march around the White House and rally at Freedom Plaza.

That same weekend in East Texas, Tar Sands Blockade is training volunteers for a non-violent action on Monday, Nov. 19, along the pipeline route. Solidarity demonstrations are planned across the country for the week of Nov. 14-20.

The day before the presidential election also marked the beginning of the seventh week of the Tar Sands Blockade’s tree-sitting in trees TransCanada wants to cut down, a form of non-violent resistance in the path of pipeline construction. The blockade, which started with eight tree-sitters at one location on Sept. 24, has slowly expanded to numerous tree-sitters in a variety of locations.

While the tree-sitters and their supporters on the ground have slowed pipeline construction somewhat, the TransCanada crews have continued working up to and beyond the blockades, with occasional violent, direct confrontation. The company has hired an unknown number of private security officers, in addition to the county sheriff’s officers already on the scene, and it uses helicopter surveillance.

On Oct. 31, a TransCanada employee who showed no identification arrested a presidential candidate, Green Party nominee Dr. Jill Stein, after she had delivered a knapsack full of supplies to the tree-sitters. The video of this event shows a construction worker with a swastika on the front of his hardhat. Salon.com reported on Nov. 8 on “an actual neo-Nazi among the ranks of construction workers” and showed a picture of a man with a swastika on the back of his hardhat.

Candidate Stein explained her position in a three-minute video and in a written statement issued before her arrest with six other people, Dr. Stein wrote:

“I’m here to connect the dots between superstorm Sandy and the record heat, drought, and fire we’ve seen this year and this Tar Sands pipeline, which will make all of these problems much worse.

“And I’m here to connect the dots between climate devastation and pipeline politicians both Obama and Romney who are competing, as we saw in the debates, for the role of Puppet In Chief for the fossil fuel industry. Both deserve that title. Obama’s record of ‘drill baby drill’ has gone beyond the harm done by George Bush. Mitt Romney promises more of the same.”

Stein had never been arrested before she became a presidential candidate. This misdemeanor arrest for trespassing was her second in a month. Her first arrest was for disorderly conduct, when she tried to enter the building for the second presidential debate at Hofstra College in New York. Her arrest was the 32nd arrest related to the Tar Sands Blockade.

Oct. 31 was the day the Tar Sands Blockade first arrived in Nacogdoches County in East Texas, near the town of Sacul, complete with local TV coverage. The contingent of about a dozen people included two New England women, identified only as Lauren and Pika, who established a new tree-sitting position.

County sheriff’s officers used cherry pickers in an effort to bring the women down. They succeeded with Lauren. But Pika, who is an experienced climber from Vermont, climbed higher in her tree, beyond the reach of the cherry picker. Police then cut down her platform and climb line, leaving her with only the rope she had on her person. While still in the tree, about 70 feet up, she wrote:

“I’m sitting in this pine tree under flood lights and the watchful eyes of cops, just thinking about all the implications of this pipeline and that the destruction I see 70 feet below me is just one tiny part. I feel grief, but I also feel strong! I don’t have any food or water. I couldn’t get it high enough quickly enough, so the cops cut it down. It’s starting to get a little chilly. Thanks so much for all the amazing support!!”

At about 2 a.m., Pika came down and was arrested. She and Lauren were each charged with Fourth Degree (State) Felony Criminal Mischief and Class B Misdemeanor Criminal Trespass minus the Class A Misdemeanor Resisting Arrest charge. Bond was set at $25,500. They were identified as Lauren Zygmont, 24, of Concord, New Hampshire, and Hannah Morgan, 24, of Hartland, Vermont. When they were released, police kept Pika’s shoes. Earth First News reports that, on an earlier occasion, police used similar tactics on another climber, Tre Arrow, “causing his near-fatal 40-foot fall.”

In Austin, Texas, a disorganized call for Tar Sands Blockade solidarity march on Nov. 5 produced a turnout of half a dozen people or so, even though many more had responded on Facebook that they’d be there. Support rallies the preceding three weeks had drawn TV cameras and some newspaper coverage.

On Nov. 9, a Vermont Solidarity Event put on by Rising Tide Vermont and 350 Vermont held a dessert fundraiser that raised $400 for Tar Sands Blockade.