Before the Right began demonizing government, there was a bipartisan consensus on the wisdom of federal action to build important national projects, like the Interstate Highway System. Today, the need for a strengthened infrastructure has become a national security concern, writes ex-CIA analyst Paul R. Pillar.

In the summer of 1919, the U.S. Army Motor Transport Corps sent a convoy of 81 vehicles across the United States, from Washington D.C. to Oakland, California, (and then by ferry to San Francisco). The operation was intended partly to determine what was and was not possible at the time regarding long-distance movement within the country.

Almost all of the roads the convoy used beyond Illinois were unpaved. The convoy logged 230 incidents that required it to stop because of accidents, breakdowns, extrication from mud, and repair of wooden bridges that it broke. The average speed was six miles per hour, and the trip took two months. 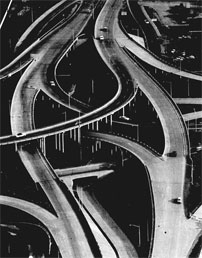 A four-level interchange at the intersection of I-20 and I-35 in Fort Worth, Texas. (Photo credit: National Archives)

Participating as an observer for the War Department was a brevet lieutenant colonel named Dwight D. Eisenhower. The experience impressed on Eisenhower the importance of a well-developed highway system for military movements as well as civilian commerce. He was later able to observe, as the victorious allied commander in the defeat of Germany in World War II, what an important part the Autobahn system played in the defense and vitality of Germany.

As president, Eisenhower pushed for the development of a network of high-speed, limited-access highways in the United States. The federal government had already played a major role in development of the nationwide system of roads as it had developed up to the 1950s, through legislation including the Federal Aid Road Act of 1916 and the Federal Highway Act of 1921.

Eisenhower signed in 1956 a new Federal Aid Highway Act, which provided for the federal government to fund 90 percent of the construction of a new network of expressways. That network is now officially known as the Dwight D. Eisenhower System of Interstate and Defense Highways.

Military convoys constitute only a tiny fraction of the traffic on today’s interstates (although the ability of the military to transport personnel and materiel quickly from one part of the country to another surely is still important to national defense).

A modern and robust domestic infrastructure has a further link to national security, however, that is even more important: the strength and efficiency of the U.S. economy is the ultimate foundation for being able to provide for the security and defense of the nation.

American politicians play lip service to this link from time to time, usually to add rhetorical support to some other point they wish to make about economic issues. But the essence of that link has not been sufficiently internalized and appreciated to the point of being fully reflected in budgets and policies.

Some appreciation for the impact of the interstate highway system, which is just one example of the subject at hand, can be gained from reflecting on the fact that almost 70 percent of the tonnage of freight shipped in the United States, and about three-quarters of the value of that freight, travels by road.

Even small inefficiencies in road transport thus can have a large negative, nationwide impact on costs and productivity. Congestion delays cost a lot of money. Understanding the difference does not require going back to that 1919 Army convoy that struggled with muddy roads and rickety bridges. People of my age, old enough to remember what long-distance road travel was like in the pre-interstate-highway days of the 1950s, can understand.

An explicit connection with national defense was made with some other programs during Eisenhower’s presidency that did not directly concern the Pentagon’s budget. A major piece of legislation in 1958 that provided federal aid to all levels of education was called the National Defense Education Act.

Enacted amid alarm over the USSR’s launch of the first Sputnik the previous year, a major rationale for the program was to produce more mathematicians, scientists and engineers who would work on overtaking the Soviets in military-related areas where they appeared to have gotten ahead. But even if the act had not yielded a single additional American rocket designer, the boost given to better utilization of the nation’s human capital through better educational opportunities helped to strengthen the U.S. economy of the future and as such was again in the interest of national security.

The damage from Superstorm Sandy is great enough that we are seeing now a bit of post-Sputnik-like concern about the need for additional investment in domestic infrastructure to protect the citizenry from future harm. The threat in this case is not from some terrorist group or rogue state but instead from natural disasters, exacerbated by change in the earth’s climate.

Just as there are multiple ways, not mutually exclusive, for dealing with a threat from something like terrorism (mitigate underlying risk factors, erect defenses, etc.), so too are there multiple appropriate responses to the type of threat represented by major storms. The underlying problem of human-induced climate change unfortunately, as reflected in this year’s political campaigns, has received pitifully insufficient attention.

Even if it had received more, the climatic changes already in train make defenses against future disasters important. And so, appropriately, ideas are being advanced for public works projects, for example, to help protect New York City from storm surges the next time anything like Sandy hits.

Such measures are expensive, and cost immediately becomes a deterrent. But here are two considerations in thinking about this problem. First, we are talking about national security, in the most literal and central sense.

What can be more of the essence of national security than the protection of the citizenry, in the places where they live and work, from physical harm and severe disruption of their daily lives? And what should receive higher priority in public policy than national security, properly defined?

A second consideration whenever cost comes up is to do some comparisons. One proposal, for example, to construct a storm surge barrier across the Verrazano Narrows at the entrance to New York harbor would cost several billion dollars. But as proponents of the idea note, it would be substantially less than the cost of a single aircraft carrier.

Or compare the cost of such projects to the costs of damage from Sandy. It is still far too early, of course, to expect an accurate figure for that, but people whose business is to make such estimates are talking in the range of $45 billion to $60 billion. The New York City comptroller estimates that his city has been losing $200 million in halted economic activity alone each day since the storm.

A rational cost-benefit analysis ought to make more attention to this side of national security a no-brainer. It isn’t, largely for two reasons, both of which have become more entrenched since Eisenhower’s time.

One is ideological antipathy to the idea that there are important things to do collectively that do not have to do with the military or with U.S. activities overseas but that are necessary to strengthen and secure the American economy and society, and that government, including the federal government, is essential for doing some of those things.

The other impediment is a diffusion of the concept of national security. We have lost sight of the core sense of securing the daily lives of Americans at home. We have substituted a notion of national security that has been broadened without apparent limit to embrace threats that in fact barely threaten ourselves, foreign conflicts in which the United States has no real stake, and nation-building in other people’s nations rather than our own.

This notion is a warping of the meaning of national security and is a huge distraction from much else that ought to concern us. It also is very, very costly.

← Risking a Repeat of Election 2000
Power of Anti-Government Propaganda →