Fourteen years ago, Iran reached out to the United States with an invitation to have U.S. nuclear scientists examine Iran’s nuclear program. However, the Defense Department nixed the plan and possibly missed a chance for avoiding the current crisis, Gareth Porter reports for Inter Press Service.

In 1998, during the Clinton administration, the Defense Department vetoed a delegation of prominent U.S. nuclear specialists to go to Iran to investigate its nuclear program at the invitation of the government of newly-elected Iranian President Mohammad Khatami, according to the nuclear scientist who was organizing the mission.

The Pentagon objected to the delegation’s mission even though it was offered the option of including one or more scientists of its own choosing on the delegation, according to Dr. Behrad Nakhai, the nuclear scientist who was organizing it. 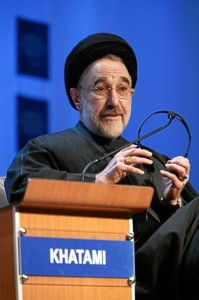 Mohammad Khatami was elected president of Iran in the late 1990s offering a more moderate approach toward the West, but he failed to overcome the years of distrust that had built up between the Islamic government in Tehran and U.S. administrations in Washington. (Photo credit: World Economic Forum)

The Pentagon veto of the nuclear scientists’ delegation eliminated the Khatami government’s most promising initiative to promote a thaw in U.S.-Iran relations by weakening a key U.S. argument for viewing Iran as a threat. President Bill Clinton’s administration had been accusing Iran of wanting nuclear weapons, based not on intelligence on the nuclear program but on the assumption that Iran would use enriched uranium for nuclear weapons rather than for civilian power.

In a series of interviews with IPS, Nakhai, an Iranian who had come to the United States after high school, got a PhD in nuclear engineering from the University of Tennessee in 1979 and was a research scientist at Oak Ridge National Laboratory, provided a detailed account of the episode.

Iran’s mission to the U.N. informed Nakhai in late February 1998 that President Khatami and the new head of Iran’s Atomic Energy Organization, Gholam-Reza Aghazadeh, wanted him to put together a group of nuclear scientists to visit Iran to study the Iranian nuclear program, Nakhai recalled.

The Iranian invitation came in the wake of President Khatami’s January 1998 interview with CNN’s Christiane Amanpour calling for a “crack in the wall of distrust” between the United States and Iran and his appeal to the U.S. people for “the exchange of professors, writers, scholars, artists, journalists and tourists.” Although those appeals had been followed by a public rejection by Supreme Leader Ayatollah Ali Khamenei of official talks between Iran and the United States, Khatami appeared determined to reduce tensions with Washington.

Nakhai recalled that he asked Iranian officials at the U.N. mission how big the delegation could be and was told, “You decide and we will issue the visas.” Iran would also foot the bill for the trip, they said. “Where can I take them?” asked Nakhai, and the Iranians responded, “You decide. No restrictions.” The Iranians said the U.S. scientists could meet with whomever they chose, according to Nakhai’s account.

On March 5, 1998, Nakhai began to contact prominent nuclear scientists and engineers. His first call was to Dr. Richard T. Lahey, chairman of the department of nuclear engineering at Renssellaer Polytechnic Institute and one of the world’s most eminent nuclear scientists. Lahey had headed a group of scientists who went to China after dÃ©tente to study the Chinese nuclear program.

After being assured by Nakhai that there would be no restrictions on what the scientists could see and where they could go, Lahey expressed interest in the proposed delegation, Nakhai recalled. In an e-mail to Lahey that same day, which Nakhai has provided to IPS, Nakhai wrote, “The 7-10 days visit will entail sessions with government officials, discussions with University and Laboratory faculties, and tours of facilities.” Nakhai suggested late spring 1998 for the delegation trip.

At Nakhai’s request, Lahey offered to contact other prominent nuclear scientists, and in a March 24 e-mail to Nakhai, also provided to IPS, Lahey said, “I have now heard from a number of top specialists in the field of Nuclear Energy and Safety who would be interested in going to Iran on a technology exchange visit.”

Lahey said Professor Theo Theofanous of University of California Santa Barbara, Professor John J. Dorning of the University of Virginia and Dr. Rusi Taleyarkhan of Oak Ridge National Laboratory had expressed their willingness to join Lahey on such a delegation.

Leahy’s e-mail also said Nakhai would need to contact the State Department “to make sure that we have formal permission to go on this trip.” Most prominent nuclear scientists had security clearances from the Department of Energy, he noted, and could lose their clearances if they made the trip without official approval.

In mid-March, Nakhai recalls, he called the State Department’s Iran desk officer, J. Christopher Stevens. (Stevens went on to become ambassador to Libya in 2012 but was killed in an attack on the U.S. consulate in Benghazi on Sept 11, 2012.)

In their third conversation that same week, Stevens told the scientist that the trip was “a good idea”, according to Nakhai. But Stevens said Nakhai would have to “clear it with the Department of Defense.” Stevens gave Nakhai the telephone number for the Deputy Assistant Secretary of Defense for Near East and South Asia Alina Romanowski, the top adviser to the secretary of defense on Near East matters.

But when Nakhai called Romanowski, he got a decidedly negative response to the proposed trip. Romanowski was unequivocally opposed to the idea, according to Nakhai, arguing that the scientists wouldn’t be able to get the truth in Iran. “They will mislead you,” Nakhai recalled her saying. “They will not show you everything.”

“I told her these scientists could not be easily fooled,” Nakhai said. He pointed to Lahey’s experience in leading a mission to China during the Richard Nixon administration. Nakhai then told Romanowski that the group would ask to go wherever the Defense Department wanted them to go.

Nakhai asked her to think it over, and said he would call back later. When Nakhai called back a week later, Romanowski gave him the same answer and the same argument, Nakhai said.

In a later conversation with Romanowski, Nakhai recalled, he offered her assurances that he would include an expert on nuclear weapons on the delegation. He also referred to his contacts with the American Nuclear Society -the premier professional association of specialists on civilian nuclear power and the Nuclear Regulatory Commission.

And in yet another phone conversation with Romanowski, Nakhai said, he invited the Pentagon to “send somebody of your own choosing as part of the delegation.” But Romanowski’s opposition remained unchanged. Nearly two months after he had first contacted the Defense Department official, Nakhai pulled the plug on the project in May 1998.

Romanowski is now deputy assistant administrator in the U.S. Agency for International Development’s Middle East Bureau. Responding to a query from IPS last Thursday, a spokesman for USAID, Ben Edwards, said, “Ms Romanowski cannot comment about the DoD in her current capacity at USAID.”

DOD’s reluctance to see a gesture toward Iran that the State Department was supporting might have been a factor, according to Pelletreau, along with distrust of an initiative coming from an Iranian scientist with no ties to the Pentagon. The DOD’s rejection of the nuclear scientists’ mission came at a crucial turning point in Iran’s nuclear program. Iran had begun testing centrifuges secretly and making plans for the construction of a uranium enrichment facility.

Although the delegation of scientists would not have uncovered those facts, it probably would have anticipated the construction of both uranium conversion and enrichment facilities, and could have analyzed whether the profile of Iran’s nuclear program indicated that it was indeed for civilian power or not. Such a report might have challenged the Clinton administration’s line on the threat of Iranian nuclear weapons.

Nakhai believes the Pentagon wanted to protect that line. “They had anticipated that the nuclear program would be useful for pressure on Iran,” Nakhai said, “and they didn’t want any reduction in that pressure point.”

Gareth Porter, an investigative historian and journalist specializing in U.S. national security policy, received the UK-based Gellhorn Prize for journalism for 2011 for articles on the U.S. war in Afghanistan. [This article was first published by Inter Press Service.]