Exclusive: War or peace with Iran will be on the U.S. presidential ballot, with Barack Obama’s reelection likely to clear the way for direct talks on resolving the dispute over Iran’s nuclear program but with a victory by Mitt Romney putting neocons in a position to seek “regime change,” reports Robert Parry.

A deal to resolve the Iranian nuclear dispute, based on face-to-face negotiations between Iranian and U.S. officials, could follow quickly upon President Barack Obama’s reelection on Nov. 6, but those bilateral relations would likely veer toward confrontation if Mitt Romney wins and his neocon advisers retake control of U.S. foreign policy.

Sources familiar with the status of the talks say the potential settlement is much closer than is publicly understood, with a reelected President Obama prepared to relax the harsh economic sanctions on Iran in exchange for tight constraints on any Iranian nuclear program, assuring that it is for peaceful purposes only. 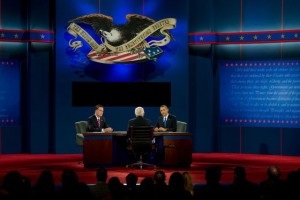 One person familiar with the status of talks said the post-election discussions also could lead to a broader rapprochement between Iran and the United States, two countries that have been at odds since 1979 when Iranian radicals overran the U.S. Embassy and took American diplomatic personnel hostage.

However, the prospects for peace could head off in a very different direction if Romney wins. His neocon advisers are considered likely to hijack the Iran sanctions and use them to force “regime change” in Tehran, rather than for their current narrow purpose of compelling Iran to negotiate seriously on limiting its nuclear program.

By effectively shifting the application of the sanctions from nuclear negotiations to regime change, the neocons could put Iran and the United States on course for another war in the Middle East, much as the neocons did in steadily ratcheting up tensions with Iraq in 2002-2003 until a peaceful resolution became impossible.

Despite the disastrous Iraq War, Washington’s influential neocons have never given up on their dream of violently remaking the Middle East through U.S.-imposed “regime change” in countries considered hostile to America and Israel.

If the new Romney administration did redeploy the sanctions for the purpose of “regime change” in Iran, the Islamic government might press ahead toward development of a nuclear weapon for self-defense. That, in turn, could precipitate a U.S.-Israeli attack on Iran, since Romney has declared that he would not accept Iran even having the “capability” to build an A-bomb, let alone an actual bomb.

Though Iran’s current readiness to make major concessions on its nuclear program marks a success for the Obama administration’s diplomacy, President Obama has been reluctant to tout the pending resolution of the crisis in the final days of the campaign out of fear that it would open him to attacks as soft on Iran.

That concern left the President making contradictory remarks at last Monday’s debate. He initially disparaged a New York Times report on a tentative agreement for bilateral talks between the United States and Iran, but later in the debate seemed to confirm that such an arrangement was in the offing.

In response to a question from moderator Bob Schieffer about the shape of a possible deal with Iran, Obama responded, “Well, first of all, those were reports in the newspaper. They are not true. But our goal is to get Iran to recognize it needs to give up its nuclear program and abide by the U.N. resolutions that have been in place, because they have the opportunity to re-enter the community of nations, and we would welcome that.”

However, several questions later, Obama briefly returned to the topic, telling Republican presidential nominee Mitt Romney: “I’m pleased that you now are endorsing our policy of applying diplomatic pressure and potentially having bilateral discussions with the Iranians to end their nuclear program.”

A day earlier, on Oct. 21, the Times cited Obama administration officials as saying that the United States and Iran “have agreed in principle for the first time to one-on-one negotiations over Iran’s nuclear program.” But the Times added that “Iranian officials have insisted that the talks wait until after the presidential election telling their American counterparts that they want to know with whom they would be negotiating.”

The Times reported that the agreement was “a result of intense, secret exchanges between American and Iranian officials that date almost to the beginning of President Obama’s term.”

One intelligence source familiar with the talks told me that the framework for a deal was largely hammered out by Defense Secretary Leon Panetta during his time as CIA director before he took the Pentagon job in mid-2011. But the source said the tough international sanctions, which the Obama administration engineered over the past year, have convinced Iranian leaders that it is time to get serious and to reach a settlement.

The source added that the scope of the bilateral talks could be much broader than just Iran’s nuclear program, which is expected to be suspended although with allowances for civilian nuclear energy. Under the plan, Iran also would tone down its rhetoric against Israel, ease bellicose President Mahmoud Ahmadinejad off the political stage and clear the way for the election of a more moderate president next year, the source said.

Regionally, Iran would be pressed to use its influence with Hezbollah to halt any hostilities toward Israel and to assist in tamping down the civil conflict in Syria. In exchange, the United States would gradually lift the sanctions, allow Iran’s international oil sales to recover, and take steps toward establishing diplomatic relations.

The Times’s article also noted that plans for face-to-face talks might collapse if Romney wins: “It is also far from clear that Mr. Obama’s opponent, Mitt Romney, would go through with the negotiation should he win election. Mr. Romney has repeatedly criticized the president as showing weakness on Iran and failing to stand firmly with Israel against the Iranian nuclear threat. …

“The prospect of one-on-one negotiations could put Mr. Romney in an awkward spot, since he has opposed allowing Iran to enrich uranium to any level, a concession that experts say will probably figure in any deal on the nuclear program.”

During the Oct. 22 debate, Romney displayed ignorance about basic facts regarding Iran and he indicated that he shared the view of his neocon advisers that the civil war in Syria amounted to “an opportunity.”

In the third presidential debate, Romney said, “Syria’s an opportunity for us because Syria plays an important role in the Middle East, particularly right now. Syria is Iran’s only ally in the Arab world. It’s their route to the sea. It’s the route for them to arm Hezbollah in Lebanon, which threatens, of course, our ally Israel. And so seeing Syria remove [President Bashar al] Assad is a very high priority for us. Number two, seeing a, a replacement government being responsible people is critical for us.”

The “route to the sea” gaffe mistaking Iran for some landlocked country exposed Romney’s weak sense of world geography, since Iran sits on the Persian Gulf. Iran also has no common border with Syria. Iraq rests between the two countries.

For Romney’s neocon advisers, who dominate his campaign’s inner foreign policy circle, torpedoing a potential settlement on Iran’s nuclear program would be their first challenge in establishing their preeminence in a Romney administration next year.

Even if bilateral talks are held after a Romney victory, the neocons could guide them toward deliberate failure and then use the collapse as a demonstration of Iranian intransigence, thus justifying an eventual U.S.-Israeli military strike.

So, in a very practical way, a possible war with Iran — and the fate of millions of civilians who could be caught up in the carnage — will be on the ballot in the U.S. presidential election on Nov. 6.

← Telling Truths about Israel/Palestine
The Price of Political Purity →

22 comments for “Iran War on the Ballot”