After a debate that did not do a lot, to put it charitably, to clarify and illuminate differences between the candidates on issues of foreign and security policy, how should a citizen who would like foreign policy to be an important factor in electoral choices think about the choice to be made next month?

Here are some considerations that such a citizen (whose recognition of the importance of foreign policy ought to be applauded) should bear in mind and that do not require explicit reference to either of this year’s candidates or to specific statements they have made in the campaign. 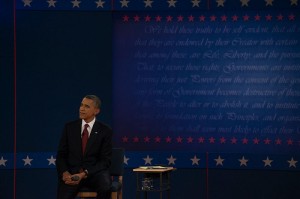 Even the superpower cannot solve all the problems out there, much less remake the rest of the world in its image. Unfortunately much of what has been said about foreign affairs in this campaign has failed to recognize that principle.

That part of the campaign has mirrored the domestic part by sounding as if the question at hand were simply whether we like or dislike what has been going on lately rather than who has the best response to problems that exist and the best understanding of what can or cannot be done about them.

We also hear many references to “strategy” but without any specifics about the content of a strategy and without recognition that the first step in formulating a sound strategy is to recognize the limits to what is possible, what we can and cannot do given our available powers and resources. We need to ask in the face of unpleasant happenings, even before asking what we should do about them, whether there is anything we can do about them.

First do no harm. The Hippocratic principle ought to apply to the nation’s choice of its leadership. Think about ways in which we would want to revise U.S. foreign policy of the past if somehow we could do that.

Probably most of the revisions, and surely most of the really consequential ones, would involve not doing something that turned out to be harmful to the nation’s interests, rather than failing to do something one might hope would have been beneficial.

For a nation, where the consequences of failure are far greater and long lasting, the regrets will be more about the failures. In choosing leaders we should pay at least as much attention to avoiding those who pose a bigger risk of failure as we do to picking ones who hold out a promise of greater success.

The appointees. A peculiarity of the U.S. political system, as compared to most other advanced democracies, is the installation of huge numbers of political appointees with each change of presidential administration. This political stratum, belonging neither to the ranks of elected politicians nor to the professional bureaucracy, tends to have major influence over foreign policies even more so than domestic ones.

So we should realize we are choosing not just a president but a corps of appointees, most of whom have their own strong ideas about the direction policy ought to go. We cannot determine in advance exactly who will wind up in what positions, but we can get a good idea of the possibilities by looking at who has become associated with the campaigns.

The more that the candidate at the head of the campaign lacks his own strong and original ideas about foreign policy, as a matter of lack of experience in this area or overall changeability, the more important it is to consider the possible appointees.

Outside influences. Something similar could be said about likely influences on the next president that do not themselves become appointed officials. The influences in question here are ones that could affect foreign policy, but the influences could be found either inside or outside the United States.

The latter would include any foreign countries or governments to which the candidate has developed a particular affinity. As with potential appointees, we can get a fairly good idea of the influences on a future president in office from where he has been receiving support and advice before entering office.

First term vs. second term. This is unavoidably a major consideration whenever an incumbent president is running for reelection. It embraces two sub-issues. One is a matter of risk propensity and in that regard is related to the earlier point about risk of failures.

An incumbent’s record, and whatever is good or bad about it, will always give us a better idea of what we can expect from the same person in the next four years than the idea we would have with someone who has never held the office. A caveat to the preceding point is that a president in a second term has different political equities or vulnerabilities than he had in a first term.

That gets to the second sub-issue. It concerns the difference between the sorts of policies produced by a president who will never be running for office again and the sort produced by a president who, given the competitive partisanship that has become a permanent feature of American politics, will be campaigning for reelection from the day he takes the oath of office.

Domestic political considerations will naturally bear more heavily on the policies of a first-term president. The foreign-policy-concerned citizen needs to ask whether this influence will on balance tend to produce better or worse policy on matters of importance to him.

On that last point, there is something to be said for the Mexican-style system of electing presidents to a single nonrenewable six-year term. But that’s not the system we have.