A dispute over President George W. Bush’s politicizing of science is reverberating in a close Arizona Senate race. The Republican is highlighting a personal attack against Democratic candidate Richard Carmona that was first raised to blunt his criticism of Bush’s politicization, writes William Boardman.

The 30-second attack ad begins with a shot of the U.S. Senate candidate approving it. The rest of the ad is a close-up showing a composed, mature woman making an unsupported, inaccurate, inflammatory, scripted, personal attack on the candidate’s opponent. The complete text:

“There was an angry pounding on the door, in the middle of the night. I’m a single mom. I feared for my kids and for myself. It was Richard Carmona and I was his boss. Carmona is not who he seems. He has issues with anger, with ethics and with women. I have testified to this under oath to Congress. Richard Carmona should never, ever be in the U.S. Senate.” 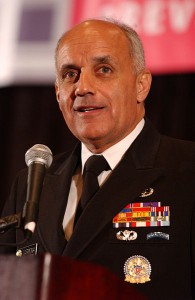 The candidate approving the ad is six-term Rep. Jeff Flake, R-Arizona, 50, who put up the ad statewide in Arizona, in Spanish as well as English, on Oct. 11, at a time when he appeared to be about three points behind in the polls. Amplified by a national Republican website, this is the harshest attack so far in an increasingly vituperative campaign. And despite its falsehoods (see below), media outlets like USA Today continue to give it free, uncritical, and unrebutted replay.

The candidates for Arizona’s open Senate seat are competing hard for the women’s vote as well as the Latino vote, giving the ad particular potency as it pits a woman of Cuban heritage against a Democrat who is a man of Puerto Rican descent.

The ad’s target is Dr. Richard Carmona, 63, who was President Bush’s Surgeon General for one term (2002-2006) and who is running as a Democrat in his first bid for elected office. In 2006, Republicans asked him to be their candidate for Congress and he refused. The seat was won by Gabrielle Giffords, D-Arizona, who was severely wounded in a 2011 assassination attempt and subsequently resigned from Congress.

The day after the Flake campaign ad launched, Dr. Carmona responded at a news conference that his accuser had “lied.” And in an 11-minute interview with a quietly hostile and uninformed interviewer on Arizona Republic’s Channel 12 in Phoenix, Dr. Carmona calmly rejected all allegations and called on Rep. Flake to pull the ad “because it’s false.” The Arizona Republic has endorsed Rep. Flake.

The woman in the ad is Dr. Cristina V. Beato, a former Bush administration Acting Assistant Secretary of Health, U.S. Health and Human Services Department (HHS) (2003-2005), when she was Dr, Carmona’s superior and supervisor most of that time. Her nomination to be full Assistant Secretary stalled in 2004 over the reliability of her resume. Given the number of apparently false claims in the resume, the Senate never formally considered her nomination.

Dr. Beato has alleged that, during 2003-2005, when both doctors lived near each other on the campus of the National Institutes of Health in Bethesda, Maryland, Dr. Carmona came “pounding” on her door at night on two occasions. She does not specify dates or times, or much other detail, and she made no formal complaint at the time.

She first reported the alleged events to five congressional staffers in a secret two-and-a-half hour interview session in November 2007, with no congressmen present. This was part of a congressional investigation into alleged manipulation of science for political ends during the Bush administration, in which Dr. Carmona was a prime accuser.

Congressional staff assured Dr. Beato in 2007 that her interview would not become public.  Politico obtained and published a copy of the transcript in May 2012.

Both the Flake campaign and the National Republican Senatorial Committee (NRSC) refer to this staff interview as if it had been before the House Oversight and Government Reform Committee, which never called Dr. Beato as a witness.

Both the Flake campaign and NRSC refer to Dr. Beato’s interview as sworn testimony. Dr. Beato says in the ad, “I have testified to this under oath to Congress.” But as the transcript shows (page 4), attorney Naomi Seiler, the committee’s counsel, advises Dr. Beato: “Because this is not a deposition, you will not be placed under oath, but you are required to answer questions from Congress truthfully.”

But at the time of the interview, it was already four months after Dr. Carmona had made headlines by criticizing Bush administration political appointees in HHS for trying to make the agency’s science fit their political agenda.  Although Dr. Carmona refused to name anyone, the New York Times reported in early July 2007 that: “more than a half-dozen former top health officials said in interviews that the official most likely to have interfered was Dr. Cristina V. Beato.”

The Times also reported that former officials were saying that “Dr. Beato was widely seen within the department as trying to advance conservative agendas” and that “Dr. Beato was more ideological and more right-wing, less objective and more political [than Dr. Carmona].”

Later in July 2007, the Washington Post reported that a different Bush political appointee had suppressed another Surgeon General’s report that called on Americans to help solve global health problems. Dr. Carmona had commissioned that 65-page report and testified to a House committee that the Bush political appointee told him that the report would either become a political document, or it would not be released.

When congressional investigators interviewed Dr. Carmona, he denied that the events Dr. Beato described had ever happened. So far, everyone who has come forward with personal knowledge of circumstances at HHS during 2003-2005 agrees that, at best, Dr. Beato and Dr. Carmona did not get along well.

Another character assassination ad was released by the National Republican Senatorial Committee (NRSC) that runs 1:17 and is titled: “The Carmona Files Volume 1: Women in the Workplace” featuring Dr. Beato’s allegations and other, older reports that were considered by the Senate before they voted 98-0 to confirm him as Surgeon General.

Near the end of her 2007 interview with congressional staffers, Dr. Beato said one reason she was scared of Dr. Carmona was that “the guy had already killed somebody” (page 95), which is also one of the items featured on the NRSC website. Then she added that she thought his mother had been an alcoholic. The staffers did not follow up on these details and the interview ended moments later.

In fact, Dr. Carmona, who is a decorated Vietnam War vet, had indeed killed someone in 1999, when he was working as a deputy for the Pima County Sheriff’s Office in Arizona. Responding to a car accident, he confronted a mentally ill man who was assaulting another person in the car he had just rear-ended. Ordered out of the car, the man shot at Carmona, grazing his head, and he responded with seven shots that killed the man.

It later turned out the man was suspected of having stabbed his father to death earlier that day.

Three years later, after his nomination to be Surgeon General, one of Dr. Carmona’s fellow doctors raised questions about the event, framing it as a moment when Dr. Carmona should have behaved more like a doctor (“first do no harm”) and less like a law-enforcement officer.  Senators did not ask any questions about the incident.

← Buying ‘Justice’
The Real Blame for Deaths in Libya →