The American Left is engaged in its quadrennial debate, whether to vote for “the lesser evil” Democrat or maintain political purity and either boycott the election or cast a ballot for a minor-party candidate. A similar argument in 1968 helped change the course of U.S. history, Ted Lieverman recalls.

I get uneasy when I see liberals and progressives complaining so vigorously about President Barack Obama’s lack of accomplishments. Sure, the last four years have seen many mistakes and disappointments by the White House. But when I think about the realistic choices in the 2012 election, I remember with embarrassment my own private scandal from many years ago.

Okay, it’s time to come clean. Remember the election of Richard Nixon in 1968? That was my fault. 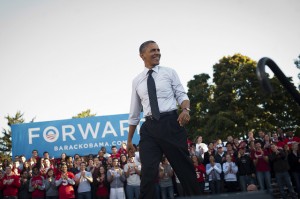 So there I am, a college sophomore, helping to run a local campaign office in Rockville Centre for Allard Lowenstein, an antiwar Democrat running for Congress in the Fifth District on Long Island. It’s the night before the election, and we are busy finalizing plans to contact voters, offer rides to the polls, respond to election irregularities, and flood our district with flyers.

Four nights before, President Lyndon Johnson had announced a partial halt in U.S. bombing of North Vietnam as a way of jump-starting the peace negotiations in Paris – and helping Vice President Hubert Humphrey win a close race against Republican Richard Nixon.

Lowenstein, who did more than anyone to dissuade Johnson from seeking reelection, who recruited Eugene McCarthy and then Robert Kennedy to run against him, has so far refused to endorse Humphrey. Now, he says in a large meeting of staff and volunteers, the bombing halt and Humphrey’s recent speech in Salt Lake City on the war have convinced him that endorsing Humphrey is necessary. Many of us are dismayed at his decision and, though we continue to work hard for Lowenstein, resolve not to help Humphrey.

As we work on election eve, a union rep comes in and, noting the lack of any campaign materials for Humphrey, starts loading up our front table with flyers, brochures and bumper stickers. We coolly inform him not to leave those materials there, as this office is not supporting Humphrey. Angry and incredulous, he storms out. We pat ourselves on the back for our moral conviction and work through the night to prepare for the big day.

Election Day is hectic, and we’re still at the campaign party at 3 a.m. the day after. Lowenstein has won by a narrow margin, and the vote for President is still too close to call, with Humphrey trailing slightly.

You know the end of the story. Nixon wins, keeps the war going, expands it to Cambodia and Laos, wiretaps his friends as well as his enemies, amasses huge amounts of illegal slush funds, assembles a secret spy team known as the Plumbers, obstructs justice, and ultimately goes down in flames, resigning from office in 1974 while facing near-certain impeachment by the House of Representatives.

And why did Nixon win in 1968? Plenty of reasons, but the most immediate, and the one we had some control over, was the lack of effort by antiwar Democrats and the New Left who saw no important distinction between the candidates.

Maybe that’s true if you take the 30,000-foot view of politics but almost no one lives their lives at 30,000 feet. They live on the ground, with their hopes and fears as they raise families, seek and keep employment, pay the mortgage, and cope with the outside world.  Here on the ground who becomes President means the difference between health and safety regulations being enforced or ignored, between the water becoming more drinkable or more dangerous, between corruption being attacked or encouraged, between quality health care becoming more accessible or further out of reach, between pointless wars being encouraged or avoided.

The 2012 election presents a pretty stark choice. Either you support President Obama and fight for a government responsive to the needs of living human beings, based on the principle of one person, one vote or you go with Mitt Romney and the Republican vision of one dollar, one vote, where corporations and fetuses are people but women and workers are second-class citizens.

Some lefties talk about the trap of electoral politics, and how voting distracts from the real world of organizing. I’m all in favor of organizing (quick which candidate used to be a community organizer?), but no one says organizers can’t take 30 minutes one day every two years to vote. Voting is not the denial of popular sovereignty but its affirmation.

This is not about the lesser of two evils. This is a choice between two roads, between moving however slowly and haltingly to protect citizens through democratically elected government; or moving further towards de facto government by corporate giants. Your vote, your choice.

But don’t make that stupid, naive decision that it doesn’t matter. Even though Humphrey took New York by over 350,000 votes, I still feel like I learned the hard way.

Ted Lieverman is a free-lance photographer and former lawyer in Philadelphia.

16 comments for “When ‘Lesser-Evil’ Misses the Point”