The Obama administration is hesitant to close a deal with Iran in the last weeks of Campaign 2012, but is eyeing a likely agreement if President Obama is reelected. Iran appears ready to accept a phase-down of its nuclear project for sanctions relief, writes ex-CIA analyst Paul R. Pillar.

An Iranian proposal reported by David Sanger in the New York Times confirms the outlines of an eminently achievable agreement that would end the impasse between Tehran and the West over the Iranian nuclear program.

Both sides are looking at a deal (although the P5+1 side has so far failed actually to put such a proposal on the table) in which the basic trade would be curtailment of Iran’s enrichment of uranium to the 20 percent level in return for relief from economic sanctions. Such an agreement along these lines makes sense because it would meet the major concerns of each side. 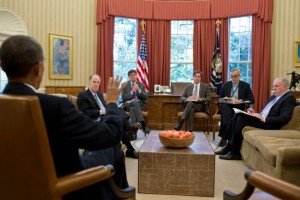 The West’s major concern is about an Iranian enrichment program that would give Iran enough fissile material to make nuclear weapons if it ever decided to do so. The 20 percent level is of specific concern because it represents a possible step toward enrichment to weapons-grade uranium. Iran’s major concern, indeed, its preeminent reason to negotiate at all, is to end the economic damage from the sanctions.

It would be hard to overstate the significance of this concurrence of views on the fundamental outlines of an agreement. Many international negotiations, even between parties that do a lot more talking with each other than the West does with Iran, never make it this far. They take a long time to get to the details of an agreement, or never get to them at all, because they remain at odds regarding the fundamentals.

The remaining disagreement between Iran and the West about the nuclear program involves details, in two areas. One concerns exactly what restrictions Iran would have to observe regarding 20 percent enrichment. To be acceptable to the West an agreement probably would have to prohibit not only further enrichment to this level but also any continuing possession by Iran of uranium previously enriched to this level, in a form that would leave open the possibility of enriching to higher levels.

Fortunately the Iranians already have gone a long way to resolving this issue by converting most of their 20 percent stock into reactor fuel plates (which they have contended all along is their purpose in enriching to this level), which is a form that precludes any further enrichment.

The other set of details involves sequencing: exactly when one side is to fulfill its obligations, relative to when the other side fulfills its obligations. This is one of the most common matters that arise in complicated international negotiations. Naturally each side would like to get everything it is looking for before giving up anything itself.

This is also one of the issues most readily subject to compromise. The stakes are not indivisible. Neither side will get everything it wants at once. The obvious shape of a compromise, for which there is plenty of precedent in other negotiations, is to implement the agreement in stages, each side both giving something and getting something at each stage.

Do not be misled by what may seem like a big distance between the two sides’ current positions, as highlighted by hard-line statements on either side that emphasize the unacceptability of the other side’s current position. That too is standard in international negotiations. Each side stakes out a “bargaining position” that is not to be confused with a final requirement.

To the extent that any of the hard-line statements do not just represent bargaining positions, they may be ill-conceived and ill-informed. Sanger quotes an anonymous U.S. official, taking a hard line on the sequencing issue, as saying that Iran could restart a suspended enrichment program in a “nanosecond” but that reimposing sanctions would take “years.”

It would take a whole lot of nanoseconds for Iran to do anything in violation of an agreement that would have significance for the development of nuclear weapons. And as for sanctions, the reality is the opposite of what the official said.

One visit to Capitol Hill to listen to anything said there about Iran is enough to realize that politically it is far easier to impose sanctions on Iran than to lift them. If Tehran were to renege on a nuclear agreement, it would be easier still (not just in Washington, but in other Western capitals).

Keep all of this in mind when anyone talks about alternatives to negotiating a nuclear agreement with Iran, with the most momentous alternative being a resort to war. It would not be a war to prevent Iran from acquiring a nuclear weapon, even if military force could do that, which it can’t.

4 comments for “An Iran Nuke Deal Within Reach”