Exclusive: At the Republican National Convention and on the campaign trail, Mitt Romney has come up with a new laugh line, mocking President Obama’s policies to slow global warming. In doing so, Romney distorts a quote from an Obama speech in 2008 about ocean levels, reports Robert Parry.

Republican presidential nominee Mitt Romney has offered few details about how he would run the U.S. government, but he has made clear one thing about his environmental views: he has contempt for President Barack Obama’s efforts to promote alternative energy and combat global warming.

Fitting with the new Republican orthodoxy that climate-change science is either a hoax or hysteria, Romney has incorporated into his speeches a joke about Obama’s interest in protecting the environment, a sure-fire laugh line for the GOP faithful. 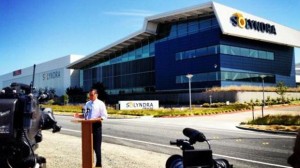 In his acceptance speech on Thursday, Romney said, “President Obama promised to begin to slow the rise of the oceans (pause for mocking laughter) and heal the planet. MY promise is to help you and your family.”

Romney apparently was so thrilled with the success of his new “joke” that he repeated it while on a post-convention campaign swing. In Cincinnati, Ohio, on Saturday, he elicited more laughs from the crowd when he claimed Obama “famously said he was going to slow the rise of the oceans.” Romney added, “Our promise to you is this: we’re going to help the American people.”

Not surprisingly, Romney’s recitation of what Obama said isn’t correct. Obama never said “he was going to slow the rise of the oceans,” but rather he said in his June 4, 2008, victory speech after clinching the Democratic nomination that “the American people,” i.e. by changing policies and leaders, would look back at this moment as the time “the rise of the oceans began to slow and our planet began to heal.”

But more important than Romney’s rhetorical exaggeration is that his ridicule of global-warming again counterpoises that longer-term existential threat to mankind against the short-term interests of today’s voters, suggesting that President Romney would ignore the former in favor of the latter.

Yes, it’s true that playing off the environment against jobs has been a common political tactic on the American Right since the days of Ronald Reagan, who once blamed trees for pollution. Those Reagan years also saw the repudiation of earlier bipartisan efforts to invest in alternative energy sources.

In a commentary earlier this year about a documentary, “A Road Not Taken,” which traced the fate of Carter’s solar panels, Sam Parry wrote that a major environmental impact from Election 1980 was Reagan’s decimation of alternative-energy research.

“For Carter, the dual causes of renewable energy and energy independence were always high on his agenda,” Sam Parry wrote. “In early February 1977, just two weeks into his presidency, Carter gave a national televised fireside chat, wearing a yellow wool sweater and promoting a national energy policy as a top priority for his administration.

“Over the next four years, Carter turned this commitment into a multitude of programs and initiatives. Carter created the Department of Energy, taxed oil company profits, improved automobile fuel efficiency, invested heavily in the Solar Energy Research Institute (the precursor to the National Renewable Energy Laboratory), cut America’s oil imports in half, and increased U.S. use of renewable energy like solar power with a goal of generating 20 percent of all energy consumed in America from renewable sources by 2000.

“Carter laid out a route for America’s energy future that, while still needing traditional fossil fuels, promoted cleaner alternatives and conservation. In his last State of the Union address, given just days before President Reagan’s inauguration, President Carter reflected on what he hoped his legacy would be on this crucial issue of energy.”

In that speech, Carter said: “The Administration’s 1977 National Energy Plan marked an historic departure from the policies of previous Administrations. The plan stressed the importance of both energy production and conservation to achieving our ultimate national goal of relying primarily on secure sources of energy.

“In 1978, I initiated the Administration’s Solar Domestic Policy Review. This represented the first step towards widespread introduction of renewable energy sources into the Nation’s economy. As a result of the Review, I issued the 1979 Solar Message to Congress, the first such message in the Nation’s history. The Message outlined the Administration’s solar program and established an ambitious national goal for the year 2000 of obtaining 20 percent of this Nation’s energy from solar and renewable sources.

“The thrust of the federal solar program is to help industry develop solar energy sources by emphasizing basic research and development of solar technologies which are not currently economic, such as photovoltaics, which generate energy directly from the sun. At the same time, through tax incentives, education, and the Solar Energy and Energy Conservation Bank, the solar program seeks to encourage state and local governments, industry, and our citizens to expand their use of solar and renewable resource technologies currently available.

“As a result of these policies and programs, the energy efficiency of the American economy has improved markedly and investments in renewable energy sources have grown significantly. It now takes 3 1/2 percent less energy to produce a constant dollar of GNP than it did in January 1977. This increase in efficiency represents a savings of over 1.3 million barrels per day of oil equivalent, about the level of total oil production now occurring in Alaska.”

Sam Parry then wrote: “after Carter was out of the White House, President Reagan not only removed the solar panels from the roof, he systematically dismantled Carter’s alternative energy and conservation initiatives. Reagan became the anti-Carter in almost every way on energy policy.

“Due largely to Reagan’s policy reversals on alternative energy, the United States fell far short of Carter’s goal of getting 20 percent of its energy from renewable sources by 2000, achieving about only one-quarter of that target, even less than what Carter’s policies had achieved by the early 1980s.

“Indeed, for those who understand the dire threat of catastrophic climate change and the curse of America’s continued addiction to fossil fuels, ‘A Road Not Taken’ can be a painful documentary to watch. It may be even more painful for our kids and grandkids to watch this film in a world that already is on its way to 11 degrees F warming (or more) by the end of the century. Scratch that. It won’t be painful to watch a movie. It will be painful to live in such a world.

“But first, some good news. America is currently in the midst of a mini-boom for renewable energy, the likes of which we haven’t seen since, well, the Carter administration. In 2010, 8.21 percent of all energy consumed in America came from renewable energy, i.e. not fossil fuels and not nuclear. That’s up from 5.37 percent in 2001. [See U.S. Energy Information Administration.]”

The Obama administration has made renewable energy a priority in a way that the U.S. government hasn’t seen since those days of Jimmy Carter. President Obama devoted much of his 2009 stimulus package to support research and development of clean energy, and he regularly touts progress made in raising automobile mileage standards and advancing wind, solar and other alternative power sources.

Just as notably, Romney has attacked Obama’s interest in these non-polluting forms of energy, even appearing outside a shuttered Solyndra plant to highlight the failure of that solar-panel company which went under despite U.S. loan guarantees.

Now, Romney seems eager to personalize the attacks on Obama’s energy proposals by linking them to a favorite right-wing theme, that Obama sees himself in grandiose and presumptuous terms. Thus, the taunting claim that Obama vowed to lower the ocean’s waters by himself, an apparent allusion to Moses parting the Red Sea.

So, Romney gets to appeal to his right-wing base in two ways, pandering to the anti-science conservatives who reject the evidence of climate change while suggesting that Obama is somehow sacrilegious in supposedly viewing himself in Biblical terms.

Romney’s decision to highlight his new-found disdain for efforts to stem rising ocean levels and other threats from global warming suggests, too, that the stakes of Election 2012, like the Election of 1980, will be whether the United States presses ahead on efforts to mitigate climate change or goes back to ignoring the problem.