Led by Egypt, key Muslim nations also including Turkey, Saudi Arabia and Iran are exploring ways to reduce the political violence in Syria, an initiative that upsets some in Washington because it represents an independent regional approach, observes ex-CIA analyst Paul R. Pillar.

For a second-choice candidate (the Muslim Brotherhood’s original candidate in Egypt’s presidential election was disqualified), Mohamed Morsi has been active and assertive since taking office.

Most noteworthy was his successful engineering of the retirement of Egypt’s most senior military officers and his reclaiming of some powers that the unelected Supreme Council of the Armed Forces had earlier taken away from the elected presidency. Now Morsi is spreading his wings in foreign policywith an initiative that aims to work with Turkey, Saudi Arabia and Iran to try to reduce the bloodshed in Syria. 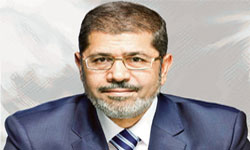 This is just the sort of move that will generate significant heartburn among many in the United States (and even more in Israel). First, because Islamists, including anyone from the Muslim Brotherhood, get treated automatically with suspicion, and any assertiveness on their part is viewed with distrust.

Second, because this particular initiative will be seen as undermining the isolation of Iran. And isolation of Iran has become even stronger dogma than suspicion of the Muslim Brotherhood. That isolation long ago achieved the status of being treated as if it were an end in itself, with nary a thought given to whether isolation of Iran contributes anything to resolution of problems with Iran, rather than prolonging or even exacerbating those problems.

Actually, Morsi’s initiative ought to be smiled upon. Its objective of reducing the accelerating bloodshed in Syria is a laudatory goal and one expressed by most other governments. The governments he is engaging are appropriate ones to engage on this problem because of their regional prominence and ability to bring influence to bear on the subject. One can look on this project as a good example, from the U.S. point of view, of what Leslie Gelb was talking about when recommending that the United States not try to solve every world problem itself but instead recognize that other states have problem-solving responsibilities too.

The Syrian civil war is a thankless tar baby of a problem, and we ought to be pleased when someone else is willing to have a go at trying to do something about it. Morsi’s prospects of success have to be rated as low, but it is hard to see any significant downside of even a failed attempt on his part.

Those who reflexively worry about any improvement in Egyptian-Iranian relations should note that even if such improvement were somehow contrary to U.S. interests, it isn’t, and it could even represent a useful channel for the United States, Morsi is not rushing to bring about such improvement.

There are many ways in which players in the Middle East, acting out of their own interests, can do things that also are consistent with U.S. interests, as long as we do not try to impede such actions because of a rigid and artificial conception of who are good guys and who are bad guys in the region.