From the Archive: An Israeli court has ruled that Rachel Corrie “put herself in danger” and thus Israel bears no blame for the 23-year-old American being crushed by an Israeli bulldozer as it leveled Palestinian homes in Gaza in 2003. Last March, the ninth anniversary of her death, her parents recalled her sacrifice.

It has been nine years since our daughter Rachel was crushed to death under an Israeli-driven, U.S.-funded-and-built Caterpillar D9 bulldozer in Gaza.

In March 2003, the news was full of talk of war with Iraq a preemptive war to protect the West, particularly the U.S. and Israel, from the weapons of mass destruction then alleged to have been amassed by Saddam Hussein. 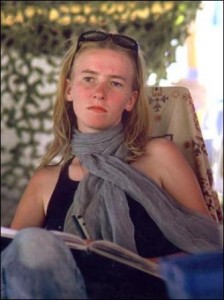 Rachel Corrie, a peace activist who was crushed by an Israeli bulldozer as she tried to block it from destroying homes in Gaza.

When Rachel traveled to Gaza that year, the world was not watching. According to Human Rights Watch, from September 2000 until September 2004, 1,600 Palestinian homes in the city of Rafah were destroyed by the Israeli military as it occupied the Gaza Strip. One-tenth of the population lost their homes.

Rachel chose to be in Gaza when the ground attack against Iraq broke out. She feared an escalation of the violence and a tightening of the isolation against people there, as the world looked to the northeast and watched for the expected carnage in Iraq.

In 2003, Rachel wrote: “I went to a rally a few days ago in Khan Younis in solidarity with the people of Iraq. Many analogies were made about the continuing suffering of the Palestinian people under Israeli occupation and the upcoming occupation of Iraq by the United States not the war itself but the certain aftermath of the war.

“If people aren’t already thinking about the consequences of this war for the people of the entire region then I hope they will start.”

Now, in 2012, we listen to similar news calls for bombing Iran to prevent it from acquiring nuclear weapons. The preemptive war has already begun with the assassination of Iranian nuclear scientists.

The news from our politicians is discouraging and even frightening, but in the meeting places and streets in our communities, we are making the kind of change that Rachel envisioned.

It is happening in Olympia, Washington, with continuing support for the Olympia Food Co-op’s boycott of Israeli products until the rights of Palestinians are addressed.

Throughout Puget Sound, we have successfully challenged efforts by the Israeli government to use members of the Israeli gay community to distract from the continuing oppression of Palestinian people.

Churches in our region are conversing about divestment from corporations like Caterpillar Inc. for their refusal to address their continuing participation in human rights abuses and the illegal occupation of the West Bank and Gaza.

As the threat of war with Iran, the disintegration of the situation in Afghanistan, and the bombing of Gaza continue, the work we are all doing in our hometowns at the grassroots level is powerful and critical.

Today, as we remember Rachel’s stand nine years ago, we encourage our friends across the country and world to strengthen your own communities, educate, educate, educate, support each other in taking action, and walk with peace, love, and forgiveness in your hearts as you work for change.