Exclusive: Mitt Romney “jokingly” observed that “no one’s ever asked to see my birth certificate” as he once again pandered to “birthers” and their racist conspiracy theory. But TV commentators rushed to put down any suggestion that Romney is a racist. But is he, asks Robert Parry.

U.S. media pundits were quick to reassure the American people that despite a tasteless “joke” referring to the racist lie that Barack Obama was born in Kenya Republican presidential candidate Mitt Romney is surely no racist. We were told it was just an unfortunate off-the-cuff attempt at humor. But is that true?

Romney may not be a crude racist, the sort who would dress up in white sheets and burn crosses on someone’s lawn. But America has had a long and equally grim history of country-club racists whose personal contempt toward blacks, Hispanics, Arabs and other dark-skinned people is cloaked in more genteel phrasing. 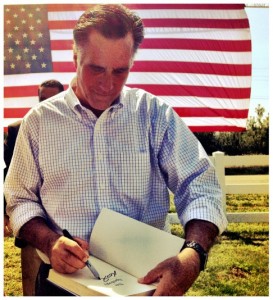 The Republican presidential candidate more fits that mold. In his book, No Apology, Romney delved into academic theories about the alleged cultural inferiority of Mexicans and Palestinians. Describing his thoughts as he traveled the world, he wrote:

“I wondered how such vast differences could exist between countries that were literally next door to each other. How could Americans be so rich and Mexicans so poor? How could Israelis have created a highly developed, technology-based economy while their Palestinian neighbors had not yet even begun to move to an industrial economy?”

Romney praised the writings of Harvard professor David Landes, who in Wealth and Poverty of Nations said “culture makes all the difference.”

Then, Romney cited some cultural aspects possessed by such countries that prosper contrasted with those that don’t including a strong work ethic, creativity, entrepreneurial spirit, cooperation, commitment to education, faith in God, devotion to family, patriotism, honor, trust in the law, and respect for life.

Romney reprised these thoughts in a late July speech in Jerusalem to wealthy Jewish-American supporters. Again citing Landes’s book, Romney asserted that “culture makes all the difference. And as I come here and I look out over this city and consider the accomplishments of the people of this nation, I recognize the power of at least culture and a few other things,” an apparent reference to divine intervention on Israel’s behalf.

But Romney’s larger point was that Israel’s relative economic success, versus the Palestinians’ economic predicament, could be traced to Israel’s cultural superiority, not to the long-term Israeli occupation of Palestinian territories that has denied those inhabitants a reasonable chance to build a modern economy.

Romney’s campaign denied that his remark was intended to slight the Palestinians. But there’s no doubt that when you say that one nation thrives because of its superior culture that means that another one fails because of its deficient culture. For the Palestinians, that assessment is particularly offensive since much of their poverty relates directly to the harsh conditions from decades of Israeli occupation, including barriers to outside trade.

A Pander to Birtherism

Similarly, Romney showed no regard to the racial dimensions of the “birther” controversy in which right-wingers have claimed that President Obama was born in Kenya despite the state of Hawaii releasing his birth certificates showing he was born in Hawaii, a fact verified by contemporaneous birth announcements in local newspapers.

On Friday, speaking in his native Michigan and standing alongside his wife Ann, Romney said, “Now I love being home in this place where Ann and I were raised, where both of us were born. Ann was born in Henry Ford Hospital. I was born in Harper Hospital. No one’s ever asked to see my birth certificate. They know that this is the place that we were born and raised.” After the “punch line,” Romney paused to take in the appreciative laughter and applause from his predominantly white audience.

Though Romney’s remark drew immediate criticism from commentators, many were just as quick to add that Romney is no racist. But it is often true that people demonstrate their racism or other bigotry through humor. Especially in more refined circles, it is considered a more acceptable way to disparage a racial or ethnic group.

A key point of No Apology is to disparage President Obama for supposedly “apologizing” for America, though Romney is short of specifics as to exactly what Obama has said that would constitute an apology, rather than just the occasional recognition that the U.S. government hasn’t always been perfect.

Yet, one of the ways the United States clearly has fallen short of its finest ideals has been in the history of white supremacy and the callousness toward the harm done to non-whites. Romney’s book and his “joke” on Friday puts him in the camp with white supremacists, a place where he has chosen to be.

By noting, accurately, that no one has asked for his birth certificate, Romney also recognized that as a white man from a prominent family his Americanism is beyond question. The same is not true for an African-American with a “foreign-sounding” name like Barack Hussein Obama.

It is ironic, however, that neither Romney nor Obama had fathers who were born in the United States. Romney’s father, George Romney, was born in Mexico where his polygamous Mormon grandfather had fled to escape American laws against a man taking multiple wives. Obama’s father was from Kenya.

Yet, the two family situations have been treated entirely differently. As Mitt Romney noted, “No one’s ever asked to see my birth certificate,” while many prominent white Republicans have demanded to see Obama’s birth certificate.

The baseless “birther” conspiracy theory has been perpetuated despite the fact that Obama authorized Hawaiian authorities to release even his “long-form” birth certificate when “birthers” raised questions about the “short-form” certificate that had been public for years.

Though the offensive theory about Obama’s birthplace has been repeatedly disproved, its promoters continue to use it as a way to rally working-class whites against the black “other.” Romney is even giving several prominent “birthers” speaking slots at the Republican National Convention next week. These include billionaire Donald Trump who briefly jumped to the top of Republican presidential polls when he began promoting the lie about Obama being born in Kenya.

Taking everything into account including Romney’s well-documented hostility toward undocumented Mexicans in the United States a troubling case could be made that Romney indeed is a racist, at least of the country-club variety, a sad turn for a nation that only four years ago elected its first African-American president.

← In Case You Missed…
More Neglect for America’s Poor →

57 comments for “Is Mitt Romney a Racist?”