With the Non-Aligned Movement meeting this week in Tehran, Veterans For Peace is urging the organization of 120 nations not formally allied with any major power bloc to take steps to deter the Israeli-American threats of war against Iran over its nuclear enrichment program.

FROM: Veterans For Peace

This is an urgent appeal from Veterans For Peace. We are an organization of U.S. veterans formed in 1985 to try to bring an end to war. VFP is a non-profit organization recognized by the UN as an NGO.

We are appealing to the leaders of the Non-Aligned Movement to do everything in your power to head off a military attack on Iranin the coming weeks. Israel’s leaders regard the period between now and the U.S. election on November 6 as the most opportune time to virtually guarantee U.S. support for such an attack. And the continuing build-up of U.S. forces in the area of the Persian Gulf strengthens the impression of U.S. readiness to provide it. 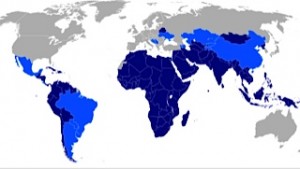 Members of the Non-Aligned Movement in dark blue and observer states in light blue. (Graphic by Ichwan Palongengi)

As you non-aligned leaders meet later this week in Tehran, it seems time for plain speaking, and warning. Official statements by Israel and the U.S. assert, with cavalier nonchalance, that the “military option” against Iran is “on the table.”

Thus, Israel and the U.S. are, de facto, in open violation of Article 2(4) of the U.N. Charter, which prohibits not only the use of force but also the threat to use force against a country from which there is no imminent danger. Sadly, after such threats it can be a short step to the actual use of force, as we observed in the lead-up to the illegal attack on Iraq in March 2003.

The U.S. corporate-owned media is highlighting the same kind of “fixed” intelligence and facts used exactly ten years ago to “justify” the attack on Iraq. Even though in January both Defense Secretary Leon Panetta and his Israeli counterpart, Ehud Barak, acknowledged that Iran is NOT working on a nuclear weapon, military action is still being blithely promoted as one option to deal with Iran’s “nuclear ambitions.”

We Veterans For Peace know what war is like. President Obama does not. His political advisers also do not. Besides, their attention is fixed almost exclusively on the upcoming presidential election.

What is most dangerous is that the White House threat/mantra that all options, expressly including the “military option,” are on the table is seen by Israeli leaders as tantamount to a pledge that Obama will feel forced to honor, giving them carte blanche for attacking Iran, with the full expectation of U.S. military support.

Veterans For Peace has been trying to warn about the mounting threat to Iran, but our warnings have been kept out of the U.S. corporate-owned media. Six months ago we sent an official memorandum to President Obama warning him that he needed to “talk sense to [Israeli Prime Minister] Netanyahu.”

More recently, at the conclusion of our national conference on August 12th, we issued this statement:

“We reaffirm our solidarity with the Iranian people and urge the United States to lift the economic sanctions that were imposed on Iran. These sanctions are an act of war and are hurting the people of Iran. We demand that our own government stop its threats of war and we implore President Obama to state publicly and very clearly to Israel that the United States will not support an attack on Iran.”

Most Israelis and most Americans do not want war with Iran. As for the harsh sanctions on Iran, it is only the rhetoric of the governments in Tel Aviv and Washington and the parroting corporate media that have misled so many into thinking that sanctions against Iran are needed and morally justified.

Nonaligned countries are aware, better than most, of the suffering incurred by the imposition of such measures. Sanctions against Iran are no more justified than the ones imposed earlier on Iraq, which caused the deaths of at least 500,000 children under the age of five, according to the U.N.

The U.S. Catholic Bishops denounced that death toll as “unconscionable” in a formal statement on November 14, 2001. Madeleine Albright, in contrast, when she was U.S. Ambassador to the U.N., said she thought the toll was “worth it.” Sadly, that kind of thinking still prevails in the Obama administration.

The stringent economic sanctions imposed on Iran are equally unconscionable. And a military attack on Iran would be a flagrant violation of international law.

This is not a time to sit on the sidelines and watch events unfold. Accordingly, we appeal to the leaders of non-aligned nations about to meet this week in Tehran to move swiftly to do what they can to head off any military attack on Iran and to take a strong position against the economic sanctions.

Leah Bolger spent 20 years on active duty in the U.S. Navy and retired in 2000 at the rank of Commander. She is currently a full-time peace activist and serves as the National President of Veterans For Peace.

← An Israeli October Surprise for Obama?
Squeezing a London Bank on Iran →