Claiming to speak for the Constitution, the Right has convinced many Americans of an upside-down account of what the Framers were doing and timid historians have let these false impressions harden into conventional wisdom. Beverly Bandler says a vigorous and honest debate about this history is needed now.

In 1987, Americans celebrated the 200th anniversary of the Constitution of the United States with great fanfare. Warren E. Burger, chairman of the Commission on the Bicentennial of the Constitution and Chief Justice of the U.S. from 1969 to 1986, wrote of the “vitality of this remarkable document that has withstood 200 years of change, including a Civil War, two World Wars, and 40 years of Cold War.”

This coming Sept. 17, the 225th anniversary of the Constitution portends to be a significantly less joyous occasion. Given the political vitriol of the last several years, it will probably be marked with heated discord of division and partisanship. 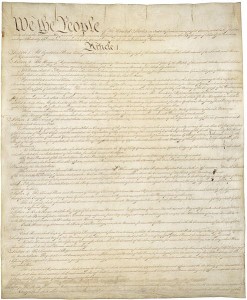 The U.S. Constitution on display at the National Archives.

The past 25 years have brought unforeseen, astounding and alarming changes in the nation. We have a United States “unraveling” with its more than 300 million people in various stages of either polarized engagement or numbed complacency. Those who are politically engaged appear to be participants in a non-violent (so far, fortunately) civil war that has echoes of both the 1861-1865 Civil War and the late Weimar Republic.

The nation in 2012 is not a “more perfect union,” and “justice” and “domestic tranquility” are in short supply. “Defense” has come to mean more often aggressive “offense.” The “pursuit of happiness” appears to be limited to the 1 percent. Most scholars agree that wealth inequality in the U.S. is at historic highs.

Americans appear to have lost confidence in crucial institutions. The approval rating for the Congress sank as low as 10 percent. American mass culture, heavily influenced by banal television offerings, heavy on violence and “skin,” is generally frivolous and foolish; the infrastructure is crumbling; the education system has been severely compromised; politics has become dominated by people who make a virtue out of ignorance.

Susan Jacoby, author of The Age of American Unreason, has asserted that: “America is now ill with a powerful mutant strain of intertwined ignorance, anti-rationalism and anti-intellectualism”– cognitive dissonance on a profound scale. For example, the Texas curriculum standards in science and history are not being written by accredited academics, they are being developed by a dentist and insurance salesman.

A sizable portion of the American public cannot distinguish between opinion and argument, between belief and logic, between perception and reality. Too many not only reject facts and reason, but accept bald lies with equanimity. U.S. politics, especially on the Right, appears to have entered “a parallel universe where ignorance, denial and unreason trump facts, evidence and rationality,” according to an article in New Science magazine.

Particularly ominous is the Right’s nationwide effort to disenfranchise voters who are most likely to vote Democratic. The first Voter ID laws of the current era were passed in 2003. As of March 2012, 19 states require no ID, but the other 31 have requirements that range from non-photo ID to strict photo ID. In Pennsylvania, a GOP-supported voter-ID law threatens to disenfranchise 10 percent of the state’s voters.

Meanwhile, the U.S. Supreme Court and the federal appellate courts have undergone a dramatic shift to the right, as distinguished law professor and constitutional expert Erwin Chemerinsky points out. The goal is to enforce a conservative worldview on the people of the United States by “reinterpreting the Constitution by reshaping the judiciary Basic long-standing principles of constitutional law have been overturned already by the Rehnquist and Roberts courts.”

Some ultra-conservatives seek to replace America’s democratic system with a theocracy. It can be argued that the United States is, in fact, no longer a republic. While we can debate when the Republic’s death began, some trace it to the late 1960s. Others point to the 1970s. But it certainly accelerated with the so-called Reagan Revolution in the 1980s and the subsequent second Gilded Age.

Many consider the nail in the coffin to be the Citizens United decision by the Supreme Court on Jan. 21, 2010. This decision confirmed corporations as “people” and opened the flood gates of corporate  money into a political system that was already broken, dysfunctional and  corrupt.

Certainly the United States now has all the unmistakable signs of an oligarchy, the corrupt rule of the wealthy. Americans have been witnessing the hostile takeover of the government by corporations, their corporados, and by religious zealots, a takeover already in its late stage.

The Right’s fundamentalism has been aided immeasurably by the general ignorance and what has been characterized as “learned helplessness” among the 70 percent of the American public and a complacent and complicit corporate media.

“Laissez-faire government, unchecked corporate power and the deprivations and inequalities they [the right-wingers] bred weren’t just bad public policy – they were constitutional infirmities,” writes William E. Forbath, professor of law and history. “But liberals have largely forgotten how to think, talk and fight along these lines.”

Making a similar point, journalist Robert Parry wrote: “In Roberts’s decision [rejecting the Commerce Clause as constitutional justification for the Affordable Care Act], you find references to the faux founding history that the Right has been assembling over the past several decades.”

In all the confusing public commentary about the Constitution in today’s turbulence, this is clear: most Americans know very little if anything about the U.S. Constitution. Most of what we “know” is based on superficial exposure, sketchy beliefs, myths and assumptions. This is particularly true for those not exposed to civics education and history over the last several decades; for many of us the memory of this part of our education is dim.

It has been pointed out that: “You can read the U.S.  Constitution, including its 27 amendments, in about a half-hour, but it takes decades of study to understand how this blueprint for our nation’s government came into existence.” It requires interpretation and an awareness of history.

Given the current acrimonious political landscape, it is crucial that Americans be better informed about the Constitution — and not only about our founding documents but about American history.

A well-educated citizenry is particularly important if the current effort to enact a 28th amendment is to succeed, one that states that corporations are not persons and can be regulated, a proposal in response to the Supreme Court ruling on Citizens United v. Federal Election Commission.

Robert Dahl, who has been called “the premier democratic theorist of our time,” has explored the “vital tension between the Americans’ belief in the legitimacy of their constitution and their belief in the principles of democracy.” He suggests that we think about the Constitution in a new way, and his hope is that we start discussing it.

“Later, in the nineteenth and twentieth centuries, an explosion of democratic theory, experience, and practice yield up an abundance of new democratic norms and mechanisms.”

Constitutional law professor Jack M. Balkin emphasizes: “The framers expected that their language, not their intentions, would control future generations. They created, in John Marshall’s words, a ‘constitution, intended to endure for ages to come, and consequently, to be adapted to the various crises of human affairs.’”

As Justice Oliver Wendell Holmes Jr. wrote in 1920, the Constitution’s words “called into life a being” whose “development could not have been foreseen completely by the most gifted of its begetters.” Hence we must interpret our Constitution “in the light of our whole experience and not merely in that of what was said a hundred years ago.”

The Founders and Framers were not infallible demi-gods, they were mortal men who tried to do the very best they could at that time and place.

Though Chief Justice Roberts upheld the constitutionality of health-care reform under the narrow taxing power of Congress — while rejecting the use of the broader Commerce Clause — constitutional scholar Bruce Ackerman said, “John Roberts’ decision on health care places the country at a constitutional crossroads.”

Pamela S. Karlan, professor of public interest law, warns that the Supreme Court decision on the Affordable Care Act “has given Americans who care about economic and social justice a reason to worry.”

In the November 2012 election, the stakes are higher than most Americans understand. In a polarized nation, the Constitution can again become what Professor Richard R. Beeman reminds us: “Our nation’s most powerful symbol of unity.” But to meet that desirable goal, we must do the homework required.

We would all like to think that there are short cuts, that we can save our Republic and our Constitution the easy way. We cannot. And we’re late.

Beverly Bandler is a public affairs professional whose career spans some 40 years. Her credentials include serving as president of the state-level League of Women Voters of the Virgin Islands and extensive public education efforts in the Washington, D.C. area for 16 years. She writes from Mexico.

← The Mystery of Arafat’s Death
The ‘America-Held-Hostage’ Narrative →

11 comments for “The Battle over the Constitution”