Former Israeli Prime Minister Yitzhak Shamir, who died on June 30, was one of the last surviving founders of Israel who lived under the dark cloud of the Holocaust and thus felt justified to do whatever was needed to establish and protect the Jewish state. As such, he was less shy than later Israeli leaders in admitting some harsh realities.

I encountered that side of Shamir in 1993 when I took part in an interview with him at his office in Tel Aviv. One question was whether his Likud predecessor, Menachem Begin, had collaborated with Republicans before the 1980 election to block President Jimmy Carter’s attempts to negotiate freedom for 52 U.S. hostages then held in Iran. 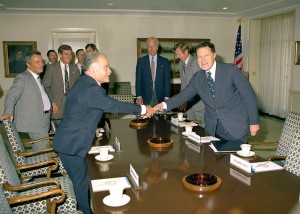 Carter’s failure to free the hostages destroyed his hopes for reelection and set the stage for Ronald Reagan’s landslide victory. Though some Israeli operatives have acknowledged over the years that Israel served as Reagan’s middleman in arms payoffs to Iran’s Islamic leaders, the official Israeli reaction has remained one of denial.

But Shamir was not your typical Israeli official, especially in retirement. He could range from witty to truculent, impatient with outsiders who didn’t understand the hard choices that he and others had made for Israel’s security.

Given his background as a former leader of the violent Zionist underground that fought for Israel’s independence and advanced that cause through acts of terrorism he also surrounded himself with surprising candor about his personal history.

As I waited in his office for the interview, I was approached by one of his young female assistants dressed in a gray and blue smock with a head covering in the traditional Hebrew style. As we chatted, she smiled and said in a lilting voice, “Prime Minister Shamir, he was a terrorist, you know.” I responded, “Yes, I’m aware of the prime minister’s biography.”

Though rarely mentioned in the U.S. press, Shamir like Menachem Begin was implicated in the terrorist violence that radical Zionists employed in the 1940s to drive Palestinians from the land that would become Israel and to eliminate Western officials who were seen as obstacles to a Jewish state.

One of the most famous of those terrorist attacks was the 1946 bombing of the King David Hotel in Jerusalem where British officials were staying. The attack, which killed 91 people, was carried out by the Irgun, a terrorist group which was run by Begin and to which Shamir had belonged before joining an even more violent offshoot known as the Stern Gang.

In 1948, Shamir was one of the Stern Gang leaders who ordered the assassination of the United Nations representative in the Middle East, Swedish diplomat Folke Bernadotte, even though he had, in 1945, negotiated the release of 31,000 prisoners, including Jews, from German concentration camps. [For details on Shamir’s terrorism, see Consortiumnews.com’s  “Yitzhak Shamir: the Well-Liked Terrorist.”]

After Israeli independence, Shamir became an intelligence officer in the Mossad and continued the secret war against perceived enemies of Israel. Later, Shamir joined Begin’s Likud Party in seeking expansion of Israel beyond its internationally recognized borders, into Palestinian lands that Israel occupied after the Six-Day War of 1967.

From its founding in 1973, Likud held as a central tenet the goal of changing “the facts on the ground” by placing Jewish settlements in the West Bank to prevent its future use as the land of a Palestinian state.

In the late 1970s, that possibility led to a crack in the normally close U.S.-Israeli relationship. Likud’s first Prime Minister Menachem Begin grew angry with incessant pressure from President Carter to trade land conquered in 1967 for peace. First came the Camp David agreement that returned the Sinai to Egypt, but Begin worried more about Carter seeking a Palestinian state on the West Bank in his second term.

In the 1991 book, The Last Option, former Mossad and Foreign Ministry official David Kimche wrote that Begin had gotten wind of “collusion” between Carter and Egyptian President Anwar Sadat “to force Israel to abandon her refusal to withdraw from territories occupied in 1967, including Jerusalem, and to agree to the establishment of a Palestinian state.”

Kimche continued, “This plan prepared behind Israel’s back and without her knowledge must rank as a unique attempt in United States’s diplomatic history of short-changing a friend and ally by deceit and manipulation.”

However, Begin recognized that the scheme required Carter winning a second term in 1980 when, Kimche wrote, “he would be free to compel Israel to accept a settlement of the Palestinian problem on his and Egyptian terms, without having to fear the backlash of the American Jewish lobby.”

In a 1992 memoir, Profits of War, Ari Ben-Menashe, an Israeli military intelligence officer who worked with Likud, agreed that Begin and other Likud leaders held Carter in contempt and wanted him out of office.

“Begin loathed Carter for the peace agreement forced upon him at Camp David,” relinquishing the Sinai to Egypt in exchange for a peace treaty, Ben-Menashe wrote. “As Begin saw it, the agreement took away Sinai from Israel, did not create a comprehensive peace, and left the Palestinian issue hanging on Israel’s back.”

Carter also recognized how much Israel’s Likud leadership wanted to deny him a second term. Questioned by congressional investigators in 1992, Carter said he realized by April 1980 that “Israel cast their lot with Reagan,” according to notes I found among the unpublished documents in the files of a House task force on the so-called October Surprise controversy.

Carter traced the Israeli opposition to his reelection to a “lingering concern [among] Jewish leaders that I was too friendly with Arabs.”

To prevent a Palestinian state and buy time for Israel to further “change the facts on the ground” by moving more Jewish settlers onto the West Bank, Begin felt Carter’s reelection had to be prevented. The Likud also believed that Reagan would give Israel a freer hand to deal with problems on its northern border with Lebanon.

The Likud-Republican collaboration reportedly led to Israel becoming a go-between for the Reagan campaign’s secret contacts with Iran, helping to prevent Carter from resolving the U.S.-Iranian hostage crisis and dooming his reelection hopes.

The so-called “October Surprise” mystery of 1980 whether Begin’s government did assist Republicans in thwarting Carter’s hostage negotiations with Iran was hotly disputed when it emerged as an issue a decade later. Republicans and pro-Israeli propagandists sought to discredit the inquiry, often with the help of timid Democrats. [For more on this history, see Robert Parry’s Secrecy & Privilege or Consortiumnews.com’s “New October Surprise Series.”]

That was the context in which I met Yitzhak Shamir in 1993, after I was asked by a documentary film team to assist in an interview with him.

I wasn’t expecting much new information about the October Surprise story, but Shamir was an unpredictable figure. He also had served as Israel’s foreign minister in 1980 and succeeded Begin as prime minister in 1983, putting him in positions where he might well know what happened.

During the interview, Shamir told the documentarians that the Iranian revolution in 1979 had “constituted a danger for us. We are worried all the time about what is going on there.” Iran had been a key Israeli ally under the Shah before radical Islamists took power and dubbed Israel “the little Satan” to America’s “great Satan.”

As for restoring some relations with the new Islamist government in 1980, Shamir said, “We did what we could. This was the principle. I don’t know many details about it. I was not involved in the details, and, you know, I am used to forgetting details.”

But Shamir had a startling assessment of the larger October Surprise issue. “I know about all the efforts of the Carter administration,” he said. “And, well, I read this interesting book of Gary Sick’s,” a reference to the 1991 book, October Surprise, in which former National Security Council aide Gary Sick made the case for believing the Republicans had disrupted the hostage negotiations before the 1980 election.

With the topic raised, one interviewer asked, “What do you think? Was there an October Surprise?”

“Of course, it was,” Shamir responded without hesitation. “It was.”

Later in the interview, I tried to get Shamir to expand on his confirmation that an October Surprise plot had occurred in 1980. But Shamir seemed to have second thoughts about his frankness. After all, the official Israeli position was that the Begin government had not gone behind Carter’s back to collaborate with the Republicans.

“Well, I know in America, they know it,” Shamir said cryptically. “I have not been interested in it, and I don’t remember anything that could help. ”

“If you did know about it, would you tell us?” I asked.

“No, no, I don’t remember such matters, you know,” Shamir said with a wry smile.

With that Shamir refused to elaborate further. The planned documentary with the Shamir interview never was aired, since the producers ran out of money before it could be completed. I included more on the interview and other details gleaned from that Israeli trip in my 1993 book, Trick or Treason.

← Mourning Shamir: The Moral Dilemma
The Future of Egypt-Israel Peace →