The United States has threatened to impose punishing sanctions on countries importing oil from Iran and only at the last minute on Thursday granted China a waiver from the penalties. But these third-party sanctions are likely illegal under trade laws, write Flynt and Hillary Mann Leverett at RaceForIran.com.

America’s policy on Iran-related secondary sanctions is on a collision course with itself as well as China. Secondary sanctions violate the United States’ obligations under the World Trade Organization and are, thus, illegal.

(While a WTO signatory may decide, on national security grounds, to restrict its trade with another country, there is no legal basis for one state to impose sanctions against another over business that the second state conducts with a third country.) 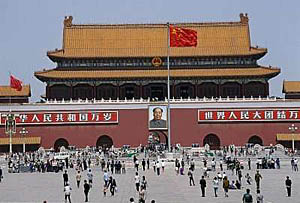 If Washington actually imposed secondary sanctions on another state for, say, buying Iranian oil and the sanctioned country took the United States to the WTO’s Dispute Resolution Mechanism, the United States would almost certainly lose the case.

Given this reality, the whole edifice of Iran-related secondary sanctions is in reality a house of cards. It rests on an assumption that no state will ever really challenge the legitimacy of America’s Iran-related extraterritorial sanctions, and this means that the United States cannot ever really impose them.

The Obama Administration is bringing this glaring contradiction increasingly to the fore, by supinely collaborating with the Congress to enact secondary sanctions into laws that give the Executive Branch less and less discretion over their actual application. This dynamic is now coming to a head in the Administration’s dealings with China.

We are currently in China, as Visiting Scholars at Peking University’s School of International Studies. And that means we are here during the run-up to formal implementation of the United States’ newest round of Iran-related secondary sanctions that were scheduled to go into effect on June 28.

These new sanctions, at least as legislated, threaten to punish financial and corporate entities in countries that continue to purchase Iranian oil at their historic levels of consumption. So far, the Obama Administration has issued sanctions waivers to all of the major buyers of Iranian oil, see here and here,all the major buyers, that is, except the People’s Republic of China. [This article was written before the Obama administration granted the waiver to China.]

Trade data indicate that China’s imports of Iranian oil declined significantly in the first quarter of this year. It is unclear to what extent this reduction was intended as an accommodation to the United States and to what extent it was the product of a payment dispute with Tehran.

But, whatever the reason, the reduction prompted Secretary of State Hillary Clinton to note last week that “we’ve seen China slowly but surely take actions.” [See here.] Clinton even seemed to hint that the Administration might be looking for an opening to waive the imposition of sanctions against China:

“I have to certify under American laws whether or not countries are reducing their purchases of crude oil from Iran and I was able to certify that India was, Japan was, South Korea was. And we think, based on the latest data, that China is also moving in that direction.”

Since the resolution of the payments dispute between China and Iran, however, China’s imports of Iranian oil have picked up once again. [See here and here.] And the Chinese government continues to insist that the country’s purchases of oil from the Islamic Republic are “fully reasonable and legitimate.” [See here.]

The White House and State Department will be under enormous pressure from the Congress (Hill Democrats will provide the President no cover on the issue), the Romney campaign, and various domestic interest groups to sanction China over its continued oil buys from Iran.

The Administration’s alliance with Congress and the pro-Israel lobby on Iran sanctions, combined with its misguided assessment that the United States can somehow compel Iran’s “surrender” on the nuclear issue, have put the President and his team in a “damned if you do, damned if you don’t” position.

This is very much a problem of the Administration’s own making.

[At the deadline, on June 28, the Obama administration exempted China and Singapore from the sanctions and praised the two countries for reducing their import of Iranian oil. U.S. officials cited Chinese data showing that China’s imports of Iranian oil had dropped 25 percent from January to May, compared to the previous year.]

Flynt Leverett served as a Middle East expert on George W. Bush’s National Security Council staff until the Iraq War and worked previously at the State Department and at the Central Intelligence Agency. Hillary Mann Leverett was the NSC expert on Iran and from 2001 to 2003  was one of only a few U.S. diplomats authorized to negotiate with the Iranians over Afghanistan, al-Qaeda and Iraq. [This article was originally published at RaceforIran.com. Direct link: http://www.raceforiran.com/u-s-sanctions-policy-on-a-collision-course-against-iran-increasing-tensions-with-china]

← The Thwarting of Catholic Reform
Footlong Hot Dogs of the Apocalypse →

6 comments for “Illegal US Sanctions on Iran?”