Recent historical discoveries about northern Palestine of two millennia ago reveal how radical Jesus’s message was, what risks he was asking his followers to take, and why he was arrested and crucified as an insurrectionist when he ventured south to Jerusalem, says Rev. Howard Bess.

Though divided into innumerable groupings, the roughly 2 billion people who call themselves Christians hold one belief that identifies us all. We believe that God was uniquely present in the teacher/prophet Jesus from Nazareth.

In Paul’s words “God was in Christ reconciling the world to himself.” Christians almost universally believe that Jesus was fully human and also fully divine. Put another way, Christians believe there is a Jesus of history and a theological Jesus somehow united in one person. 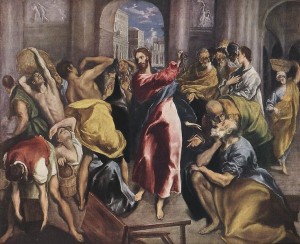 El Greco's depiction of Jesus driving the moneychangers from the Temple.

Through history and continuing today, Christians have been much more interested in the theological Jesus than in the Jesus of history. Churches have focused on the miracle worker who healed the sick, raised the dead, multiplied loaves and fish, and walked on water, the Jesus who died for the world’s sins, was raised on the third day, ascended into the heavens and now sits at the right hand of his Father/God.

The great neglect of Christians is the Jesus of history. Over the centuries lonely souls have attempted to give greater importance to the historical Jesus, only to find frustration and failure in their journey. Following is a brief summary of what has happened during the past century:

We are now in the midst of the third search for the historical Jesus, which began in the mid-1980s without any stated goal of finding the Jesus of history. Rather it began with historical research about the area in northern Palestine which we call Galilee.

Social scientists have been able to reconstruct the social, political, religious, economic and symbolic world of Galilee in the first half of the First Century CE. The abundance of information that has been generated is giving interpreters of the historical Jesus a working context for the things that the Gospels say that he said and did.

The list of the historical facts about Palestine in the first half of the First Century CE is growing. Here are four examples:

–Galilee was a rural area with a history of farming that had become an advanced agrarian society. Ownership and control of land had passed from the farmer who farmed the land to wealthy aristocrats who lived in large cities removed from the farms. Those who tilled the soil had been reduced to poor day-laborers.

–Galilee was a hot bed of the Zealots, who advocated violent overthrow of every oppressor. The typical Zealot was always armed with a knife and was ready to commit violence. Zealots were regularly executed under the charge of insurrection.

–Galileans resisted the cultural changes that were taking place in the nearby large cities, Sepphoris and Tiberius, what was known as Hellinization. Galileans maintained their Jewish identity, but practiced their faith differently than the Jews in southern Palestine who tied their worship to the Jerusalem Temple. Galileans were at odds with the religious authorities in Jerusalem, too.

–The geography of Galilee lent itself to the settlement of small villages in which clan relationships were dominant. Resistance to outside cultural pressures was strong and local customs and values were maintained.

All of the four dynamics to which I have referred have been established by research that is completely outside the domain of studying the Bible. Yet these historical discoveries have powerful effects on the Bible interpreter by providing the social and political context for Jesus’s life and teachings, in particular the study of the parables that Jesus told his followers.

This third search for the historical Jesus reveals him as an advocate for justice who confronts his followers with a relentless demand for reform. Are we today ready to apply Jesus’s teachings to modern circumstances?

–Jesus taught and believed in a radical redistribution of wealth.

–Jesus was strongly identified with the poorest of the poor.

–Jesus was an insurrectionist who renounced violence as a tool of reform.

–Jesus was thoroughly Jewish and eagerly debated the application of Jewish Torah (law).

This emerging understanding of the historical Jesus also helps explain why — the first time he ventured out of his Galilean society — he was executed as an insurrectionist.

The emerging picture of the historical Jesus is not a rejection of the theological Jesus. But it does demand that we discuss and even argue both sides of the incarnation puzzle.

30 comments for “Why Jesus Died”