Exclusive: A comedy about people living their final days, as a massive meteor zeroes in on Planet Earth, may seem an unlikely movie concept. But “Seeking a Friend for the End of the World,” starring Steve Carell, is one of those rare moments when Hollywood breaks out of predictable molds, writes Lisa Pease.

It’s rare to find a movie these days that surprises, moves and entertains. Screenwriter Lorene Scafaria, in her directorial debut, brought us just such a rare gem in “Seeking a Friend for the End of the World,” a story about how a few people deal with the imminent end of the world. The film opens with the information that a meteor is about to collide with earth, and that no one will survive the impact.

The film is remarkably funny and sweet, given the dark context. The writer/director explores through foreground stories and background incidents reported on the news the way different people deal (or won’t deal) with the fact that they are all about to die. It’s a creative and thoughtful film that is grounded in a remarkable performance by Steve Carell. 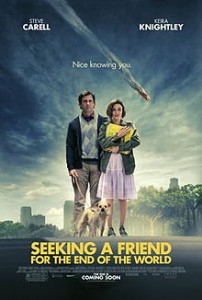 What is it about Carell that makes him seem so wounded, so vulnerable? I don’t know, but I find him incredibly compelling to watch because of that.

As the film opens, the world has 18 days left. Carell’s character, appropriately named “Dodge” because he tends to avoid confrontations, has to face the result of his choices over the years. His wife runs off, leaving him without an ally as he faces not just his own death but the imminent destruction of the planet.

Dodge’s downstairs neighbor Penny, played by Keira Knightley, pushes her way into his life, handing him some undelivered mail that includes a letter from a high school sweetheart of Dodge’s who had written him a few months earlier to say Dodge had been the love of her life. Penny insists that if Dodge still has feelings for her, he must find her. So the two set off to find the letter writer.

There are numerous humorous bits throughout, but there are some amazingly poignant ones as well. Meanwhile, in the background are the constant ominous news reports. Oil is running out. Power is about to be shut off. Chaos is erupting.

Throughout, you can’t help but wonder, what would you do if you knew that not only you, but everyone else around you, had only a few more days to live? Would you throw out your usual morality? Would you try to kill yourself? Would you rush out to find your one true love?

Each character these two encounter along the way is dealing with the imminent end of the world in different ways. And the past relationships encountered tell us much about the present characters who are the focus of the story.

I really don’t want to give away any of the story, as the fun is in the little twists and turns the story takes. But I will say this is Carell’s most endearing performance to date. Dodge’s world has already ended, prematurely, with the sudden departure of his wife, for reasons he doesn’t understand. Dodge is forced to make choices he normally wouldn’t, and therein lies the adventure at the heart of the film.

The only jarring note, and this is minor, was Keira Knightley’s performance. She is so naturally charming and interesting that when she tries to be charming and interesting, it comes across as over the top. She has a marvelously expressive face, so there’s no need for her to consciously manipulate it. We know, through the dialog, what she’s going through. I wish she had been told to dial it back a bit. Even so, she delivers a bubbly counterpoint to Carell’s more morose character.

The script has a freshness to it that makes it a welcome change from all the remakes hitting the theater this summer. This is a story you really haven’t seen before, with characters that are not cookie cutters that could have come from other films, as so many are these days.

There are a few especially poignant scenes, so bring some tissue if you tend to tear up. But know that, for all the darkness of characters facing the ultimate end, the film has a remarkably light, even uplifting spirit. I found the film deeply satisfying, which is an increasingly rare experience.

1 comment for “A Comedy at the ‘End of the World’”