The Washington Post and other neocon outlets are demanding an ever harder line against Iran in negotiations over its nuclear program. Yet, so far, the West has offered little in exchange for Iran’s concessions, writes ex-CIA analyst Paul R. Pillar.

Responses to the negotiations last week between Iran and the P5+1 are falling into familiar patterns. The outcome of this round of talks could be discerned from what each side brought to the table on the first day.

Iran had made it clear it was willing to make the key concession of ending enrichment of uranium to the worrisome 20-percent level but that it would expect something significant in return, with the obvious something being some relief from the ever-more-onerous sanctions that have been imposed on the country. 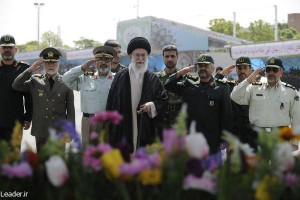 Except for an offer of spare airplane parts, the P5+1 did not budge on sanctions. Although the entire record of what transpired over the conference table is not public, it appears the P5+1 have never indicated what Iran would have to do to gain any significant relief from sanctions.

This silence, on top of the overall inflexibility of what they are hearing from their interlocutors, gives the Iranians ample reason to question the good faith of the other side and, especially amid all the talk about regime change and going to war, to wonder if, no matter what they do, all they can expect to face is pressure and more pressure.

The spinning that was well in evidence before the Baghdad talks continues, along with warped views of international negotiation that, whether or not they are part of intentional spinning, are badly mistaken. A good example is an editorial this weekend in the Washington Post. Titled in the print edition “Iran’s Intransigence,” the editorial astoundingly asserts that “Tehran sought something for nothing,” completely ignoring the aforementioned facts about enrichment levels and sanctions.

A further assertion is that the talks “failed to show that the regime of Supreme Leader Ali Khamenei has made a strategic decision to strike a bargain,” ignoring ample evidence to the contrary, from Khamenei’s pronouncements about immorality of nuclear weapons to the Iranian negotiators’ proposals to engage on a variety of matters of common concern in addition to the nuclear issue.

The editorial strikes the familiar theme about Iran not having a “right” under the Nuclear Non-Proliferation Treaty to process uranium, as if not being an explicitly enumerated right is equivalent to being prohibited.

Enrichment of uranium is not prohibited under the NPT, of course, and in more than a dozen other countries it is a major part of nuclear programs, including peaceful nuclear programs that are indeed a right under the treaty. (This is not to mention the production of plutonium by some of these same countries as well as others, including Israel.)

There also is the familiar reference to United Nations Security Council resolutions on Iran’s nuclear program. I wonder if the Iranian negotiators, while looking across the table at the P5 portion of the P5+1, mentioned how peculiar it is to use as a supposed legal reference actions that the P5 themselves took and that amount to a bill of attainder against Iran. [“P5+1” refers to the five Security Council members, plus Germany.]

This line of thought is taken further in the all-too-familiar direction of calling something a negotiation but really treating it as coercion into submission. The editorial writers say acceptance of any Iranian enrichment at all should come “only at the end of a negotiating process”, i.e. after the other side has conceded everything we want.

Even then, we should only “consider” accepting enrichment, and even then such a concession would be, in an indication of who is being allowed to set the limits in this whole endeavor, “probably unacceptable to Israel.”

Missing from all of this is one of the essential ingredients of successful negotiation, which is a full appreciation for the other side’s perspective. One can find some of that elsewhere in the Post this past weekend, in David Ignatius’s column, which in turn reflects some observations of Seyed Hossein Mousavian, the former Iranian negotiator who is now a visiting scholar at Princeton. “It’s useful to view recent negotiating history through Iranian eyes,” says Ignatius:

“Here’s what this optic reveals: In 2005 Khamenei removed his ban on negotiations with America; in 2009 Iran offered to export to the United States its uranium enriched to 20 percent, and it renewed this offer with greater specificity in 2010 and 2011; Iran accepted a Russian proposal last July to suspend further enrichment capacity and accept the International Atomic Energy Agency’s ‘additional protocol’ for intrusive inspection. The Iranians think that they got nothing but more sanctions for these moves.”

Ignatius correctly observes, “Successful diplomatic negotiations are always a process in which each side can claim some success, rather than one of demand and capitulation.” The apparent deafness to this on the P5+1 side has yielded an unsurprising result: “The more the West has tried to squeeze Iran, the more the Iranians have done precisely the things that infuriate the West.”

What can Iran do in the face of Western intransigence? Well, it can continue enriching uranium to 20 percent, as Iranian nuclear-program chief Fereydoon Abbasi stated on Sunday. And as we all know, Iran is capable of playing nastier versions of hardball. It plays the nasty version when others play it against Iran.

Pertinent to this, the New York Times article about Abbasi’s statement notes that Abbasi is “a former nuclear scientist who survived an assassination attempt two years ago that is believed to have been mounted by Israel.”

Now comes word of an alleged plot with Iranian connections to kill Americans, Israelis and Saudis in Azerbaijan. The lines of responsibility, including any possible connection to the Iranian regime, are very hazy, and we should be cautious in making anything of this. But if the Iranian regime was involved, the motives should not be difficult to figure out.

The alleged Azerbaijani leader of the plot told investigators “that the planned attacks were intended as revenge for the deaths of the Iranian nuclear scientists, attacks that Iran has publicly linked to Israel and the United States.”

Activity associated with the plot took place last year and evidently stopped this year as the nuclear negotiations neared. A Western diplomat commented, “What happens if the talks fail, that’s anyone’s guess.”

The behavior involved is not only infuriating to the West; some of it is deplorable. But as long as the West and Israel continue their current postures on the Iranian nuclear issue on which they have fixated, the behavior is also predictable.

← Double Standards on Civilian Deaths
Steering from the Abyss →