So far, the West is taking a hard line in talks with Iran, responding to its concessions on its nuclear program with only modest rewards and, indeed, with new threats of sanctions. U.S. politicians, in particular, are bending to Israeli demands for either Iranian capitulation or war, a worry to ex-CIA analyst Paul R. Pillar.

In looking at the state of play after a day of talks in Baghdad between Iran and the P5+1, one has to ask how much of what is impeding progress is the work of those having a stake in the negotiations failing and how much results from misunderstanding how international negotiations work.

The public picture of what transpired across the table on Wednesday is incomplete, but evidently the principal sticking point is Western refusal so far to consider any relaxation of any of the sanctions already imposed on Iran. This refusal is being maintained despite Iran having made it clear it is willing to give up enrichment of uranium to the 20 percent level, a move that would get to the heart of what ostensibly is the main Western concern about how close Iran is to a nuclear-weapons capability. 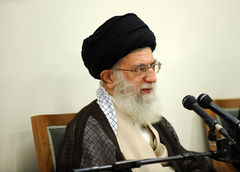 In return for this concession, the negotiators, led by the European Union’s Lady Ashton, reportedly are dangling such tidbits as spare airplane parts and fuel rods for the Iranian reactor that produces medical isotopes. While those are not quite trivial throwaways, they pale in comparison with the sanctions, the lifting of which is the main reason Iran has to negotiate.

And it is not as if incremental easing of the mountain of sanctions that have been piled up over the years would leave the P5+1 with no remaining pressure points as leverage over Iran. Far from it.

Maybe the P5+1 [the five UN Security Council members plus Germany] have something more in their pockets to reveal as talks continue. We should hope so. But as Iran has been brought to one side of table and shown increasing flexibility in recent weeks, the direction of those represented on the other side of the table, and in particular in the U.S. Congress, has been to pile on still more sanctions.

Do some of the people involved really believe that this is the way negotiations work? That rather than being give and take, it is all take and no give? That the way to induce the other side to make more concessions is to punish it when it shows flexibility?

I would not rule out that some really do have such a deeply flawed understanding of negotiations. Perhaps we are partly seeing a crude “more is better” perspective, in which it is believed that if sanctions elicited some concessions, then more sanctions are what is needed to elicit more concessions. And we have to look no farther than the House Republicans’ approach to budget issues to see an all-take-and-no-give school of negotiation in action.

On balance, however, I believe what we are seeing reflected at the conference table in Baghdad is a matter less of ignorance about negotiations than of political submission by those who know quite well what they are doing. This includes, but is not limited to, those who want the talks to fail.

The whole Iranian nuclear issue has attained the preoccupying status it has, after all, because of domestic U.S. politics and the role in those politics of a foreign government that has posited Iran’s nuclear program as the defining threat of our time. Most American politicians have come to see as politically beneficial a line according to which pressure is the only proper posture toward Iran.

Most American politicians see as politically dangerous support for any measure that could be described as making nice to Iran, regardless of how much such a measure might be necessary to achieve some other goal we supposedly are pursuing, such as avoidance of an Iranian nuclear weapon.

Possibly the non-U.S. components of the P5+1 will be able to show more flexibility than the United States, but the United States is the most important player on its side of the table, despite the E.U. chairmanship. Maybe we can hope for something more on a second day of talks. Maybe we have a better hope for something more in a second presidential term.

← In Case You Missed…
Honoring Troops with the Truth →