Fighting for real journalism or even caring that political comments connect to actual facts often seems a fool’s errand, given how big money especially on the Right has overwhelmed the democratic process with distortions and lies, a problem that Danny Schechter dissects.

Increasingly, politics is a game driven by often-invented beliefs and myths that are firmly detached from facts and their interpretation. The parties and their factions live not only in parallel universes but in different worlds of information.

Even as progressives complain that Barack Obama has moved Right even if he occasionally talks Left, the hard-core right-wing see him a black revolutionary shaped by Reverend Jeremiah Wright’s black liberation theology with allusions to Malcolm X and Kenyan communists thrown into the mix to “prove” their case. 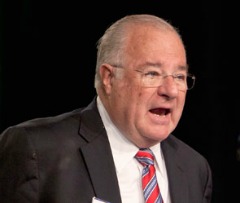 Never mind that Obama threw his one-time religious mentor Wright under the bus in 2008, or that his policies rarely speak of the needs of a black community suffering under the burden of high joblessness, foreclosures and growing poverty.

In fact, real black revolutionaries like Cornell West and so many others find the President a sell-out and an embarrassment even if their community embraces him more as an identity issue or on the basis of shared pigmentation,

The recent proposal for Wall Street trader Joe Ricketts to recycle the alleged Obama-Wright conspiracy into a defamatory political-ad campaign spoke more to his advisers’ demagoguery than to any truth-based assessment. Had the New York Times not exposed it, this $10 million dollar race-based smear likely would have gone forward.

Because it was exposed, even Mitt Romney — who hasn’t met a right-wing talking point he won’t embrace — had to distance himself from it,

As Charles Blow wrote in the Times, “It called for using Wright to ‘increase the unease’ and ‘inflame the questions’ among independents using the episode ‘that’s never been properly exploited.’ How I love the use of sinister verbs.

“There was one description of the president that truly seized me: ‘The metrosexual black Abe Lincoln has emerged as a hyper-partisan, hyper-liberal, elitist politician with more than a bit of the trimmer in him.’

“This sentence is just so deliciously ridiculous, insulting and incendiary, perfect Republican fodder. Let’s dissect it, shall we? Scalpel!”

How proud this News Dissector was to find a mainstream media maven finally resorting to dissection. (Hopefully it will prompt AdBusters to issue a new warning about the dangers of cooptation!) Blow blew the “logic” behind this crusade away.

But it almost doesn’t mater. This proposed campaign and there will be others was not offered up as part of any real debate or perspective but as a political weapon of denigration. It was a lie, but its promoters knew that many Americans, out of prejudice or ignorance, would believe it was true.

These campaigns are tools of mass distraction to fog understanding, not advance it. They play to already dumbed-down base instincts. Unfortunately, as a tactic, such distortions are not just embraced by whack-jobs. A whole industry of  campaign political consultants immersed in negative research and manipulative advertising has mainstreamed it.

This same smarmy approach is often increasingly used in the courts where well-heeled companies deliberately file gratuitous and flawed lawsuits against adversaries, including journalists who are exposing their practices or alerting the public to their scams and schemes.

This has been happening to a colleague of mine, Aaron Krowne, who created the ML-Implode websites to offer evidence of financial fraud while documenting how it brings down companies that “implode” after using sleazy techniques to enrich themselves often with government support through agencies like HUD that also victimize borrowers seeking home loans.

When writers posted whistle-blowing articles on his site showing how millions were being ripped off, even as the FHA and other agencies insured the loans thus minimizing any all risks for the scammers, he was sued and forced into court to defend his site and work as a journalist at considerable expense

The charges were bogus but it didn’t matter. Defending malicious lawsuits costs as much as filing them, and it’s hard for a small independent website to finance that even when they are 100 percent right.

As Krowne explained about the companies with lawyers-for-hire trying to shut him down, “They get an effectively100% loan without FHA knowing it, so there are no proper risk controls for this type of financing. The home price may also be inflated without limit (beyond the 3% downpayment amount). And of course, neither the seller or lender ever face any risk, which falls on FHA (and implicitly, the taxpayers).”

Wouldn’t you think the FBI or the Justice Department would rush to his side? Forget it.  They had enabled these practices in the first place and have been lax in enforcing what laws there are.

What happened next is too detailed for this column, I will write others, but when a blogger exposed an unethical business practice used against homeowners as a “scam” a word the IRS had itself used a rich principal in the company accused of misconduct, filed a so-called SLAPP suit in a Maryland court against ML-Implode for libel and damages.

And not just against the blogger but the website that carries articles by knowledgeable journalists! They even got bought, it seems an Indian tribe to join their suit to make it appear more credible. They first tried to get an injunction against Krowne in effect, a prior restraint of free speech. It cost Aaron’s company $50,000 to stop it.

At the same time, the big-bucks operator behind the suit was boasting privately in emails, that he wanted to “bankrupt” ML-Implode, while admitting that he knew the injunction attempt had virtually no chance of passing (10 percent was his exact number). Of course this is all de facto bad faith. (The irony: The company that Aaron exposed later imploded.)

But that, too, didn’t matter because ML-Implode ran out of money. The firm was forced to withdraw, and then the court declared ML-Implode in default.

Says Krowne, who is still fighting a legal battle that has become increasingly technical, as many fights like this tend to become, “If this result stands, it will probably be the first time in history a media outlet of any kind has been penalized for speaking out against a ‘business’ that itself acknowledged it had already been outlawed by the US Congress at the time it filed suit for libel.”

Hello, Charles Blow at the New York Times, any interest in dissecting this one?

The attempt to smear Obama was so blatant and racist that it could easily be exposed. But legal battles like this one go on every day in the obscure language of lawsuits filed to silence free speech.

They often work because the legal system, like the society we live in, is so unbalanced with wealth in so few hands, that truth is smothered in obscure legal rulings that the press doesn’t cover and the public can’t possibly understand.

To find out more from the ML-Implode Resource page, go to: http://ml-implode.com/sfdpacampaign.html

News Dissector Danny Schechter blogs at newsdissector.net. In addition to Blogothon, Cosimo Books has also just published his Occupy: Dissecting Occupy Wall Street. His latest film is Plunder the Crime of our Time on the financial crisis as a crime story. (plunderthecrimeofourtime.com.) He hosts News Dissector Radio Hour on Progrsssive Radio Network (PRN.fm). Comments to dissector@mediachannel.org

← Lockerbie Doubts
In Case You Missed… →

2 comments for “The Politics of Mythology”