Israel has subjected thousands of Palestinians to detention without trial, a tactic that finally provoked a hunger strike and at least modest concessions from Israeli authorities regarding prison conditions, as described by ex-CIA analyst Paul R. Pillar.

The agreement that ended a hunger strike by as many as two thousand of the Palestinians held prisoner by Israel is modest, uncertain and shaky.

Negotiated with the involvement of Egypt and the Palestinian Authority, the deal calls for Israel to ease the conditions of detention in several respects. About 20 prisoners will be taken out of solitary confinement. Family members from the Gaza Strip will be permitted prison visits, which have been denied them in recent years. 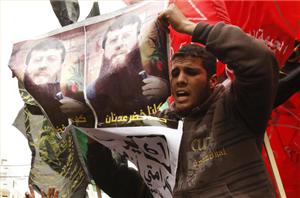 Prisoners under “administrative detention”, incarceration in which neither they, their families, nor anyone else in the outside world are told anything about why they are imprisoned, are supposed to be detained beyond six months only if evidence about them is brought before a military court.

The prisoners reportedly made some vaguely defined commitment about not engaging in any activity that would support terrorism. It is unclear whether a couple of the prisoners who have been engaging in hunger strikes longer than the rest will end their fasts.

Israel has not conceded much. It is not ending administrative detention, a legal netherworld in which those incarcerated are treated neither as criminal suspects nor as prisoners of war and which makes the U.S. concept of “illegal combatant” look like a paragon of due process. We don’t know anything about the sorts of procedures that would lead a current detainee to be kept imprisoned beyond six months.

In any case, there seems to be no impediment to Israel continuing to catch and release and catch again, resulting in serial detentions of the same individuals without anything ever being said about why they are imprisoned. It also is easy to envision the whole arrangement breaking down, with Israel declaring the deal to be void at the first sign of anything that can be labeled terrorist activity and can be connected in any way to anyone imprisoned.

Many Palestinians nevertheless see the deal as a success. Insofar as it is seen as such, it will sustain a belief that has gained increasing traction among Palestinians in recent years: that peaceful protest has potential to gain relief from the Palestinians’ predicament. It is a belief that is based on appeal to the conscience of Israelis and of the world community.

In appealing to the conscience of the world community, it dovetails with the Palestinian diplomatic strategy of framing the Israeli-Palestinian conflict as a multilateral issue worthy of attention in the most multilateral of forums, the United Nations.

Despite the meager nature of results thus far from actions such as the hunger strike, an intensified Palestinian commitment to peaceful protest is all to the good, for multiple reasons that ultimately redound to the benefit of both Palestinians and Israelis.

It is good because the continued lack of resolution of the conflict between these two peoples is fundamentally a moral issue involving political rights, having to do with the principles that conflicting claims to land ought not to be resolved through the might-makes-right device of superior military force, that peoples with a national identity ought to enjoy self-determination rather than to endure subjugation and that all peoples are entitled to a secure life inside their own homelands.

It is good also because peaceful protest represents a rejection of past Palestinian uses of violence, which were condemnable failures both in the direct harm and suffering they caused and in leading Israelis understandably to frame the conflict in terms of their own security. Peaceful protests that do no physical harm to Israel do not have those ill effects.

Peaceful tactics aimed clearly and specifically at relieving the plight of the Palestinians as a subjugated people also avoid contributing to the fallacious notion, which Israeli spokesmen and apologists habitually voice, that the problem is an effort to “delegitimize Israel” by those who somehow hope to destroy it.

Anyone who has such views and intentions today is a fringe that is almost irrelevant to resolution of this conflict. Such views are not held by the Palestinian leadership, by the community of Arab states as expressed through the Arab League, or by the vast majority of people throughout the world who have ever had anything critical to say about Israeli policies.

← How Crucial Is Media?
America’s Early Wars of Empire →