In reshaping American politics and society, the Christian Right has applied a distorted version of Jesus’s teachings, downplaying his pacifism and his contempt for wealth while emphasizing later revisions that didn’t threaten the powerful. That’s why Rev. Howard Bess says the search for the true Jesus is crucial.

I grew up as a devout, “red letter” Christian who hung on every word from Jesus. My Baptist church had a heavy influence on me and my faith was focused on making certain that I ended up in heaven. I learned that Jesus died for my sins and I was forever indebted to him.

I believed that the stories that Jesus told were earthly stories with heavenly meaning. To me, Jesus was a teacher of spiritual truth and divine wisdom. Then came seminary, where I was exposed to a different kind of study of the Bible. 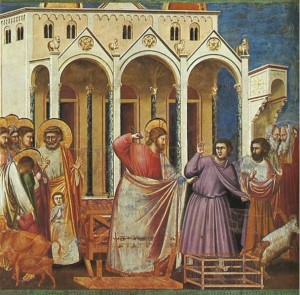 An angry Jesus driving the money-changers from the Temple in Jerusalem, as depicted by 14th Century painter Giotto di Bondone.

It was while I was in seminary that I learned that the Bible is like every other book in that every word, every sentence, every paragraph was written by a human being and in a context. So, everything that is reported about Jesus had a context.

Early in the modern effort to understand Jesus in context, scholars concluded that Jesus was crucified by Romans soldiers (not by Jews) because he was a social and political rabble-rouser. The Roman rulers could not have cared less about Jesus’s ideas about heaven. They killed him for political reasons.

The idea that Jesus was a universal sacrifice for the sins of the whole world was a theological construction of Paul, who never knew Jesus and had little knowledge of his life. Indeed, in Paul’s many writings, he never indicates any awareness of the life of Jesus or his teachings.

Instead, Paul said he had an experience of the resurrected Christ on the road to Damascus, and he developed a theology to fit his experience and his background in Judaism (with its emphasis on sacrifice, not forgiveness).

Despite Paul’s lack of contact with Jesus during his days as a teacher (and Paul’s strained relationship with Jesus’s disciples), Paul became the early church’s theologian, a brilliant thinker with unbounded energy. He was literate and wrote voluminously.

By contrast, Jesus’s disciples were not writers and none of the gospel writings can be traced to them. The gospels that we have in the Bible are collections of oral traditions reduced to writing and enlarged by unknown writers two generations after the death of Jesus.

So who was the historical Jesus, the reputational rabbi who grew up in Galilee in Northern Palestine? We have few verifiable facts of his life and it was not until the early 20th Century that the search began in earnest when Albert Schweitzer wrote The Quest of the Historical Jesus.

Schweitzer acknowledged that his quest was unsuccessful, but it kicked off a search that has never stopped. We are now in the third wave of the quest of the historical Jesus, with new research tools that have allowed a clear picture of Jesus to emerge.

The methodology of the third wave is interdisciplinary. Historians, archaeologists, sociologists and anthropologists — along with Biblical scholars — have been enlisted in the effort to construct a context in which to understand Jesus. The context that has been developed includes politics, economics and social structures.

The First Century historian Josephus has been a bonanza of information that has helped construct this context for understanding Jesus as a person, someone who emerged from the advanced agrarian society in which he lived. Jesus was influenced by the growth of aristocratic empires in the First Century as well as the power and presence of Roman rule.

Even the Romans could not control Galilee, which has always been a special place in the social, religious and economic life of Palestine. The Romans built Sepphoris and Tiberius to extend their power, but Galileans despised the two cities, which were known for the unjust rulers and greedy aristocrats who lived there.

Galileans avoided contact with the two cities and there is no record that Jesus ever went to either one, even though Nazareth was a mere four miles from Sepphoris.

Rural Galilee also was a hotbed of the Zealots, who made no secret of their contempt for Roman rule and advocated reestablishment of the nation of Israel through violent overthrow. They despised Jews who were cooperators with an evil empire.

The dominant influence of the Zealots among the poor of Galilee is a key part of the context for Jesus’s life. The gospels identify Peter as a Zealot, and a Zealot of Galilee was always armed with a weapon, typically a sharpened knife. By tradition, Jesus told Peter, “Put away your sword.”

Jesus shared the Zealots’ concerns for the poor and the disenfranchised, but the material in the gospels strongly suggests that he parted company with the Zealots over the tools of revolution. He favored peaceful means for challenging the rule of the Romans and the Jewish leaders of the Jerusalem Temple.

Our best evidence is that Jesus was a social and political radical, an advocate for the poor. Jesus had no regard for the rich and made his fateful trip to Jerusalem to rally opposition to the protectors of this aristocratic system.

Those who today want to separate politics, social ethics and issues of wealth and poverty from religion are not following the lead of Jesus from Nazareth.

← Can the Left Change the Democrats?
Last Day for Spring Fund Drive →

87 comments for “Hiding the True Jesus”