It seems Campaign 2012 will turn more on how Americans view President Obama and what he has done than how they view his likely Republican challenger Mitt Romney, who comes across as a conservative cipher. So, Beverly Bandler says Americans should make a fair and clear-headed assessment of Obama’s record.

Many progressives believe that President Barack Obama does not stand steadfast on progressive core principles. They protest what they consider his caving in over taxes, the deficit, the debt ceiling, and even Social Security. They compare his presidency to moderate Republican governance. 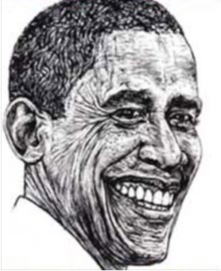 President Barack Obama as drawn by Robbie Conal at robbieconal.com

But progressives would do well to recognize that Obama can boast a substantial number of triumphs. Some backers even say Obama has “a record of astounding accomplishments.” And it’s important to note that Obama’s accomplishments have been achieved in the face of an almost impossible set of challenges.

When Obama took office, he faced “the largest financial shock since the Great Depression,” according to the International Monetary Fund. In the winter of 2008, before his administration began, the economy was shrinking at an annualized rate of nearly 9 percent and losing 700,000 jobs a month, symptoms of an incipient depression.

Neil Irwin reminds us that there was zero net job creation in the “lost decade” following December 1999. Another brutal conclusion: “In some fundamental ways, the American economy has stopped working,” wrote David Leonhardt in the New York Times Magazine as Wall Street unraveled in 2008.

In addition, Obama has been confronted by a ruthless obdurate obstructionism from a regressive Republican Party, one that has evolved into radical right-wing extremism and embraced a brazen determination to destroy the Obama presidency. The judgment that the country could be governed in a “post partisan” era proved unrealistic.

Today’s GOP has rejected all moderation. It has no interest in compromise or bipartisan cooperation, or what is known as “the common good.” The Republicans are bolstered by a disciplined Right-Wing Noise Machine that manufactures distortions, half-truths and blatant lies for political  gain.

A sizeable segment of the American public has bought into this misinformation out of fear and gullibility, compounded by a startling basic ignorance of the issues, not to mention the processes of government and U.S. history. The American public has become, generally speaking, poorly educated and dependent on sound bites. Thus, it is vulnerable  to manipulation through skillful propaganda.

In addition, President Obama has had to tread through the competing and powerful forces of what amounts to a corporate minefield. The extent to which the corporate community is willing  to go to, in effect, takeover the government and the nation became chillingly clear following the January 2010  Citizens United decision. William Greider has warned of a “corporate coup.”

Commenting on Obama, Suzanne Mettler noted that “once elected, the young president held to his word and pursued transformations in  American social policy, healthcare reform, new tax breaks, and enhanced aid to college students, that vast majorities of Americans had long told pollsters they favored.”

But, she says:“Obama’s policy agenda, in the current political context, requires him to engage in a struggle more akin to that undertaken by Progressive Era reformers, who had to destroy or reconstitute deeply entrenched  relationships if they were to achieve change. He could not follow the path of Roosevelt, finding a way around political obstacles or merely building on top of what existed; rather, he had to find ways to work through  them, by either obliterating them or restructuring  them.”

Obama, she  writes, “given his policy agenda, had  steered directly into the looming  precipice of the submerged  state: existing policies that lay beneath the surface of U.S.  market institutions and within the federal tax system.

“Contrary to opponents’ charges that his agenda involved the encroachment of the  federal government into private matters, Obama was actually attempting to restructure a dense thicket of long-established public policies, but  ones that  are largely invisible to most Americans, and that are extremely resistant to change.”

Mettler defines the submerged state  as “a conglomeration of federal  policies that function by providing incentives, subsidies or payments to  private organizations or households to encourage or reimburse them for conducting activities deemed to serve a public purpose. Yet despite their growing size, scope and tendency to channel government benefits toward the wealthy, the policies of the submerged state remain largely invisible to ordinary Americans.” [emphasis added]

Some questionable and debatable judgments notwithstanding, it is important to assess President Obama’s accomplishments against a turbulent and treacherous political environment. Some suggest that these challenges were unprecedented.

Not the least of his achievements was the American Recovery and Reinvestment Act (February 2009). While the Obama administration has been criticized for having “fumbled” the recovery, and even though the stimulus package was too small and  inadequate in its structure to restore the economy to something resembling its pre-crisis vitality, the legislation still represented “heroic efforts” that helped avert  catastrophe, a second Great Depression. Much of the public and the corporate media seem completely oblivious to this undeniable fact.

Obama’s chief policy goal was healthcare reform, which was finally passed as The Patient Protection and Affordable Care Act (March 2010). Dubbed “Obamacare,” it was the biggest expansion of the safety net in 40 years. It also represented a remarkable Democratic victory and a culmination of a health care reform quest that began in the early 20th Century, one in which seven presidents tried and failed.

This comprehensive landmark law is far from perfect, but it expands insurance coverage largely for middle-class and poor families facing serious health-care problems. Many Americans do not have a clear understanding of the complexity of health care in the United States, so Obamacare continues to be misunderstood. The fact that opponents deliberately misrepresented what it would do is not surprising, although that effort turned out to be extremely destructive.

Progressives, liberals and independents would do well to reflect carefully on the Obama presidency as we head into the 2012 election. We certainly can debate some of Barack Obama’s decisions, but we also need to be mindful of factors beyond any president’s control, in  addition to those with which Obama has had to cope.

These are extraordinarily complex and fast-moving times. That Americans respond maturely and thoughtfully will be crucial.

America does need to “come home,” as William Greider pleads. In spite of disappointments, he writes, the 2008 election could still eventually be seen as “a historic turning point.”

Greider wrote in 2009: “Barack Obama provided fresh evidence for the redeeming promise of our nation and persuaded an energetic majority to believe that Americans can still remake the country anew.”

The rational majority will simply have to accept that renewal and change cannot be accomplished overnight. It may even take a couple of generations. It will certainly take energy and effort. All  Americans should shudder at the alternative.

Beverly Bandler is a retired public affairs professional who writes from Mexico.

For more information on Barack Obama’s record, here are some sources:

The Rational Majority. Snap-Facts: over 160 daily snap-facts with supporting documentation. Join the Snap-Fact email list. Snap-Dragons:   will address “the lies and misinformation intentionally perpetuated by the radical right wing of the GOP/Tea Party.” https://sites.google.com/a/therationalmajority.org/snapofact/home    Find The Rational Majority on Facebook.

Watson, Dr. Robert P., Ph.D. The Obama Record. https://sites.google.com/a/therationalmajority.org/snapofact/information-links    This website will provide you with a comprehensive list of the   accomplishments and activities of President Obama since he was  inaugurated in  January of 2009. Accomplishments accessible in  categories. http://tinyurl.com/6mnn682

“How to Fight the Smears Online” by Will  Bunnett,  Trilogy Interactive. http://www.trilogyinteractive.com/work/fightingsmears    The number one rule of smear fighting is don’t let a bad  narrative about  your candidate settle in.