Religion in politics is a touchy topic in the United States, but Americans have a legitimate right to know how a candidate’s religious views may affect public policy on issues like population growth, anti-gay discrimination and Christian supremacy says Rev. Howard Bess.

When voters step into the voting booth, many feel the pull of both politics and religion, even though most politicians and the news media seem to prefer ignoring the latter. Three important religion-in-politics issues come to my mind immediately.

The first is Christian nationalism. Most Christians accept that America is a secular nation in which religion is to be practiced without government interference. But there are a significant number of Christians who believe the United States was formed to be a Christian nation. 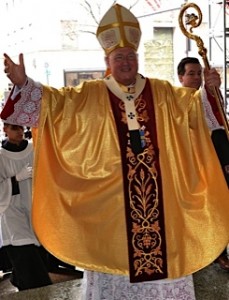 They believe it is their destiny and the will of God that Christians should rule over non-Christians. The aim of these Christian nationalists is control. They reject the principle of the separation of church and state. In that sense, they are not benign.

The second is the onslaught against the rights of homosexual, lesbian, bisexual and transgendered persons by religious organizations. The recent Proposition 8 controversy in California is a case in point.

The two largest donors to the campaign to defeat Proposition 8 were Roman Catholics (through the Knights of Columbus) and the Church of Jesus Christ of Latter Day Saints (the Mormons). Neither broke any law in providing funding for the anti-Prop 8 campaign, but religion was a central factor in their motivation. Both religious bodies opposed the granting of marriage rights to gay people because of church doctrine.

Catholics and Mormons can believe whatever they like, but when they propose that their doctrinal beliefs be made the law of the land, their beliefs become proper subjects of discussion in the political arena.

The third issue has arisen in the very recent struggle over insurance coverage of contraceptives for women. While a number of religious groups have protested a federal requirement that insurance programs paid for by employers include coverage for contraceptives, the loudest voice of protest has come from the Roman Catholic Church.

Roman Catholics have long-held canon regarding human sexuality. According to Catholic teaching, sexual activity has only one purpose, procreation. Sexual intercourse without the intent of procreation is sinful. Sexual activity for simple enjoyment is not acceptable.

Thus, the use of any kind of contraceptive by either a male or a female is forbidden. Further, sex-related sin is a serious matter. It is a primary expression of lust, which is one of the Catholic Church’s seven deadly sins.

In Catholic thinking, contraceptives promote sexual activities that have no positive purpose. So, in the name of religious freedom, the Catholic hierachy argues against any participation in the distribution of contraceptives in any way. They are probably raising a valid constitutional issue (though one that is not as clear-cut as Church defenders insist, since religious institutions in the United States must operate under civil laws).

Yet, if we understand Catholic theology, we understand the Church’s stance: the Vatican instructs Roman Catholics that sexual activity is for procreation only; when that purpose is thwarted, the will of God has been violated.

One notable result of this teaching, whether intentional or not, is the large Catholic family, raising another issue where politics addressing the common good conflict with religious edicts fulfilling a theological purpose.

In the past, large families offered both social and economic benefits, but we live in a changing world where population is exploding. Six billion people on the Earth quickly become seven billion and eight billion, putting stress on the planet’s survivability.

We talk about pollution of air, land and water. We note the impact of burning of fossil fuels. However, we sidestep the number one problem of the world, the exploding human population which is often driven by religious conviction. In other words, the Roman Catholic Church is an important factor in the pollution of the planet through the promotion of population growth.

Roman Catholics are not alone. One of the marks of the Church of Jesus Christ of Latter Day Saints is the large family, which is promoted by church teachings. Thus, Mormons are the fastest growing religion in America, though with little growth beyond birthrate. In the world today, the birthrate in Muslim nations also is unsustainable.

In part because of these religious teachings, population growth in India, Africa and Central and South America is pushing life beyond the resources to sustain the people. Only China has shown any willingness to address the problem of unsustainable population growth.

Can religious practices that actively promote rapid population growth be ignored in the name of religious freedom? Religious beliefs and practices that threaten the earth as a place for human habitation cannot be left out of the political dialogue.

In the United States, there is no religious test for running for public office. The Bill of Rights keeps government out of the religion business, but it does not keep voters from taking into account religious considerations.

When people run for public office, the voting population has a right to know how the candidate’s religion will potentially affect public policy. In that sense, the Bill of Rights does not ban religion from the public square.

When a candidate enters the public square, his/her personal religion is not left behind. Voters have valid reasons to ask religious questions.

The Rev. Howard Bess is a retired American Baptist minister, who lives in Palmer, Alaska.  His email address is hdbss@mtaonline.net .

9 comments for “When Religion Dominates Politics”