From the Archive: Celebrating Easter in 2009, ex-CIA analyst Ray McGovern saw progress toward ending the Iraq War and hope that George W. Bush and other U.S. war criminals might finally face justice. Three years later, however, many of those dreams of accountability remain unfulfilled.

In 2006, Easter dawned in Crawford, Texas, for the many friends of peace gathered to celebrate new Easter hope. Rev. Joseph Lowery gave an inspired message that morning, in what turned out to be a warm-up for his Benediction at the Inauguration of President Barack Obama in January 2009.

Camp Casey that Easter 2006 was a relatively quiet occasion to reflect and celebrate new life and one another. The best known resident of Crawford had decided to avoid the crowd assembling there, opting instead to spend Easter at Camp David, where troublesome questioners could be kept even farther away. People like Cindy Sheehan who would not stop asking why our sons and daughters were being killed and maimed in an unnecessary war in Iraq. 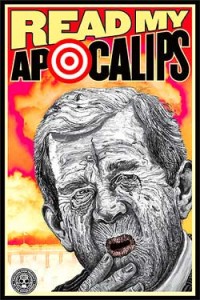 The previous summer, Sheehan had become the Rosa Parks of Crawford, challenging President George W. Bush to tell her what was the “noble cause” for which her son Casey died on April 4, 2004. Sadly, we were not surprised that an answer-less President preferred clearing brush to clearing up what he meant by saying such deaths were “worth it.”

Ironically, President Bush seemed supremely comfortable talking about evildoers, other evildoers. We, in contrast, saw evil in the launching of what the post-WWII Nuremberg Tribunal labeled a “war of aggression,” defined as the “supreme international crime, differing from other war crimes only in that it contains the accumulated evil of the whole.”

As I gathered with other pilgrims in Crawford those sad summers of 2005 and 2006, there was a strong sense of responsibility to confront “the accumulated evil of the whole”, and particularly torture.

In August 2006, the timid journalists of the western White House told us the President had sweat on his brow from clearing brush. And as we gathered one evening, someone quoted from the musical Camelot:  “I wonder what the (self-styled) king is doing tonight; what merriment is the king pursuing tonight.”

With the damning disclosures about the torture procedures unleashed by that President, it seems a good guess that, rather than making merry, he was sweating the evenings away as well. You see, President Bush had left his fingerprints on accumulated evils for which he was likely to be held accountable, in one way or another. And during the summer of 2006 the chickens were coming home to roost.

On June 29 of that year, in a 5-to-3 decision, the Supreme Court ruled that the Bush administration could not deny detainees the protections afforded by the Geneva Conventions, as the President had done by executive order of Feb. 7, 2002. Worse still from Bush’s point of view, Justice Anthony Kennedy saw fit to say the obvious; i.e., that to disregard Geneva amounts to a war crime.

So as we stood watch in Crawford in 2006, gallons of sweat were being poured into an (ultimately successful) effort to get the Republican-controlled Congress to pass a law applying retroactively, that’s right, retroactively, holding everyone, from the President on down, harmless for the illegal detainment and mistreatment of detainees.

Too clever by half; it’s not going to work. On Dec. 11, 2008, Sen. John McCain and Sen. Carl Levin released the summary of a Senate Armed Services Committee report, issued without dissent, demonstrating that Bush’s Executive Order of Feb. 7, 2002, had “opened the way to considering aggressive techniques.”

And a report of the International Committee of the Red Cross not only recounts in gory detail the torture of so-called “high-value” detainees, but also puts the final nail in the coffin, so to speak, for any plans the former President may have had to travel abroad. Even if our own government proves too timid to bring him to justice, Bush cannot risk being apprehended abroad, brought to The Hague, and tried for war crimes.

Rev. Lowery’s sermon to the gathering alongside Prairie Chapel Road just three years ago rings ever more true: “Don’t tell me Easter’s not real! Don’t tell me righteousness will not overcome evil! Thy kingdom come on earth as it is in heaven. That’s the message of Easter.”

Ray McGovern served as an Army intelligence officer and a CIA analyst for almost 30 years. He believes anthropologist Margaret Meade had it exactly right (and that the Crawford Peace House did well to adopt her dictum): “Never doubt the power of a small group of committed individuals to change the world. It is the only thing that ever has.”