Exclusive: George Washington and James Madison, two key Framers of the Constitution, saw nothing wrong with issuing mandates to citizens (to buy muskets for a militia), but today’s Republican majority on the Supreme Court seems set on going rogue and rewriting the founding document to say otherwise, Sam Parry writes.

What happens to a Republic under a written Constitution if a majority of the Supreme Court, which is empowered to interpret that Constitution, goes rogue? What if the court’s majority simply ignores the wording of the founding document and makes up the law to serve some partisan end? Does that, in effect, turn the country into a lawless state where raw power can muscle aside the democratic process?

Something very much like that could be happening if the Supreme Court’s five Republicans continue on their apparent path to strike down the individual mandate at the heart of the Affordable Care Act. In doing so, they will be rewriting the Constitution’s key Commerce Clause and thus reshaping America’s system of government by fiat, rather than by the prescribed method of making such changes through the amendment process. 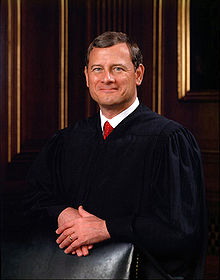 The only way the five Republicans can strike down the individual mandate and with it probably the entire law is to ignore the literal and traditional interpretations of the Commerce Clause by redefining the word “regulate” to mean something it has never meant before and that the Framers of the Constitution never intended.

The plain text of the Commerce Clause Article 1, Section 8, Clause 3 is so straightforward that a middle-school child should be able to understand it. Here it is: “Congress shall have Power to regulate Commerce with foreign Nations, and among the several States, and with the Indian Tribes.”

And the word “regulate” means today what it meant then, as was noted in a Nov. 8, 2011, ruling written by Judge Laurence Silberman, a senior judge on the U.S. Court of Appeals for the District of Columbia Circuit, a conservative appointee of President Ronald Reagan.

In upholding the individual mandate as constitutional, Silberman wrote: “At the time the Constitution was fashioned, to ‘regulate’ meant, as it does now, ‘[t]o adjust by rule or method,’ as well as ‘[t]o direct.’ To ‘direct,’ in turn, included ‘[t]o prescribe certain measure[s]; to mark out a certain course,’ and ‘[t]o order; to command.’ In other words, to ‘regulate’ can mean to require action.”

Judge Silberman went through the same check list and concluded that there was “no textual support” in the Constitution for striking down the individual mandate because the word “regulate” has always included the power to compel people to act.

But the law’s opponents insist that the individual mandate is a unique and improper form of regulation because it forces an American to do something that the person might not want to do it, i.e. go into the private market and buy health insurance.

Yet, in other enumerated powers, this idea of Congress having the power to compel people to act is widely accepted. Take, for example, the draft. While there is not currently a draft, there has been at many points in U.S. history and even now every male citizen, when he turns 18, is required to register for selective service. And, should the draft come back and should you get drafted, you would be legally compelled to serve.

If compelling individuals to risk their lives in war is an accepted use of congressional authority, it is hard to see the logic in striking down the power of Congress to compel individuals to get health insurance.

And, despite what the Affordable Care Act’s critics have said repeatedly, this is not the first time the federal government has ordered Americans to buy a private product.

Indeed, just four years after the Constitution’s ratification, the second U.S. Congress passed the Militia Acts of 1792, which were signed into law by President George Washington. The militia law ordered white men of fighting age to arm themselves with a musket, bayonet and belt, two spare flints, a cartridge box with 24 bullets and a knapsack so they could participate in militias.

If one wants to gauge whether a mandate to buy a private product violates the original intent of the Framers, one probably can’t do better than applying the thinking of George Washington, who presided at the Constitutional Convention in 1787, and James Madison, the Constitution’s architect who served in the Second Congress and argued for the militia law. [For more, see Consortiumnews.com’s “Madison: Father of the Commerce Clause.”]

So, it would seem to be a rather clear-cut constitutional case. Whether one likes the Affordable Care Act or not, it appears to fall well within the Constitution and historical precedents. By the way, that’s also the view of Ronald Reagan’s Solicitor General Charles Fried who said this in a March 28 interview:

However, if Chief Justice John Roberts and the Court’s four other Republicans go in the direction they signaled during oral arguments and strike down the individual mandate, they will not merely be making minor clarifications to the noun “commerce” and the adjective “interstate” — as the Court has done previously — but they will be revising the definition of the verb “regulate” and thus substantially editing the Constitution.

When it comes to editing the Constitution, there is a detailed process spelled out for how you do that. It’s in Article 5 of the Constitution and it’s called the amendment process something in which the Judicial Branch plays absolutely no role. The process for revising the founding document requires votes by two-thirds of both the House and the Senate and the approval of three-quarters of the states.

Besides representing an affront to the nation’s constitutional system, an end-run by a narrow majority of the Supreme Court taking upon itself to rewrite an important section of the Constitution would drastically alter the balance among the three branches of government.

Such an action would fly in the face of the longstanding principle in constitutional cases that the Supreme Court should give deference to legislation passed by the government’s Legislative Branch and signed into law by the President as chief of the Executive Branch. Under that tradition, the Judicial Branch starts with the assumption that the other two branches have acted constitutionally.

The burden of proof, therefore, should not be on the government to prove that the Constitution permits a law but rather on the plaintiffs to demonstrate how a law is unconstitutional.

Yet, during oral arguments this week, Republican justices pressed the government to prove that the Affordable Care Act was constitutional and even demanded that Solicitor General Donald B. Verrilli Jr. put forward a limiting principle to the Commerce Clause to speculate about what couldn’t be done under that power.

Justice Anthony Kennedy several times raised the point that the individual mandate changes the relationship between citizens and the federal government in, as he put it, “fundamental ways” and thus the government needed to offer a powerful justification. In his questions, however, it was not entirely clear why Kennedy thought this, given the fact that Congress has previously enacted many mandates, including requirements to contribute money to Social Security and Medicare.

In the March 28 interview, former Solicitor General Fried took issue with Kennedy’s question about this “fundamental” change, calling the line “an appalling piece of phony rhetoric” and dismissing it as “Kennedy’s Tea Party-like argument.”

On policy substance as well as on constitutional principle, Fried was baffled by the Republican justices’ opposition to the law, saying: “I’ve never understood why regulating by making people go buy something is somehow more intrusive than regulating by making them pay taxes and then giving it to them. I don’t get it.”

But Kennedy seemed to be fishing for some noble-sounding rationale for striking down the individual mandate. He was backed up by Justice Antonin Scalia who proffered the peculiar argument that if Congress could mandate the purchase of health care, why couldn’t it require people to buy broccoli as if any outlandish hypothetical regarding congressional use of the Commerce Clause disqualifies all uses of the Commerce Clause.

This line of reasoning by the Republican justices also ignored the point that the Court’s role is not to conjure up reasons to strike down a law, but rather to make a straightforward assessment of whether the individual mandate represents a regulation of interstate commerce and is thus constitutional.

In searching for a rationale to strike down the law, the Court’s Republicans also ignored the true limiting principle of any act of Congress the ballot box. If any congressional majority were crazy enough to mandate the purchase of broccoli, the voters could throw that bunch out and vote in representatives who could then reverse the law.

In the case of the Affordable Care Act, Democrats won Election 2008, in part, because they promised the voters to tackle the crisis in U.S. health care. If the voters don’t like what was done, they can vote the Democrats out of office in November. The pendulum of democracy can always undo or modify any law through legislative action.

However, what the Republican majority on the Supreme Court seems to be angling toward is a radical change in the longstanding principles behind the Constitution’s checks and balances. The five justices would bestow upon themselves the power to not only undo legislation, which has been lawfully enacted by Congress and signed by the President, but to rewrite the founding document itself.

Sam Parry is co-author of Neck Deep: The Disastrous Presidency of George W. Bush. He has worked in the environmental movement, including as a grassroots organizer, communications associate, and on the Sierra Club’s and Amnesty International’s joint Human Rights and the Environment campaign. He currently works for Environmental Defense Fund.

46 comments for “If the Supreme Court Goes Rogue”