So what has happened to many of those conservative “strict constructionists” who insist that only a literal reading of the Constitution is acceptable and that “activist” justices can’t simply “create rights” for Americans that the Framers didn’t write down?

Apparently, because these “conservatives” hate “Obamacare” almost as much as they detest President Barack Obama they’re celebrating the hypocritical spectacle of five Republican justices on the Supreme Court demanding that new limitations be placed on Congress’ constitutionally unlimited power to regulate interstate commerce. 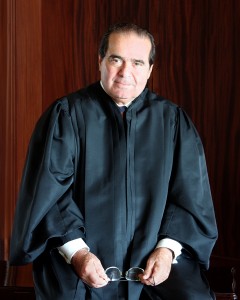 These self-proclaimed “strict constructionists” can’t find limitations in the actual Constitution, since none are there, so the GOP Five apparently intend to insert some new words into the founding document to post-facto (or perhaps ipso facto) disqualify the Affordable Care Act as “unconstitutional.”

Maybe, the GOP Five should just drive down to the National Archives, pry open the case holding the Constitution and pencil in some new words. After the relevant section about Congress having the power to regulate interstate commerce, the GOP Five can scribble in “except for things like purchases of broccoli, gym memberships, cell phones and health insurance.”

After all, in December 2000, a subset of this group (Kennedy, Scalia and Thomas along with the late Chief Justice William Rehnquist and now-retired Justice Sandra Day O’Connor) dressed up its Bush v. Gore ruling with a lot of legal references.

Essentially, however, those five Republican partisans detected a previously unknown provision in the 14th Amendment requiring that when a Republican presidential candidate is in danger of losing an election, then all the voting procedures in the key deciding state must have been identical, precinct to precinct. If they weren’t and they never are the GOP candidate wins.

On Friday, the Washington Post neoconservative editorial writers rallied to the defense of today’s GOP Five as men of undying personal integrity who simply have an honest difference over how to read the Constitution.

While praising the three days of oral arguments as “the Supreme Court’s civics lesson,” the Post’s editors expressed dismay over the “cynicism” of some liberals who “were preemptively trying to delegitimize a potential defeat at the court” by making the Republican justices look “partisan, activist and, essentially, intellectually corrupt.”

How unfair, wailed the Post’s editors. While the Post suggested that the five Republicans should show some “modesty and deference to elected legislators” who fashioned the difficult health insurance compromise, the Post seemed most upset that the integrity of the GOP Five was being questioned.

“We wouldn’t assume anyone who disagrees [with the constitutionality of the law] is a hack,” the Post declared.

And one might say the Post’s editors, who treated Saddam Hussein’s possession of WMD stockpiles as a “flat fact” in 2003 and who disparaged Americans who dared question the veracity of that casus belli, should know something about being hacks.

In Friday’s editorial, the Post also adopted the posture that most befits a journalistic hack, the cowardly and simpleminded framing of debates as both-sides-are-equally-at-fault. The Post suggested that the four Democratic justices were somehow behaving in a partisan manner by following the actual wording of the Constitution.

“We share the disappointment that the justices on both sides of their ideological divide are, for the most part, so predictable,” the Post lamented. “That’s not, in an ideal world, how judging is supposed to work.”

No, in an ideal world or even a world where we expect a modicum of philosophical consistency we might hope that Supreme Court justices would stick to interpreting the Constitution rather than demanding extemporaneous rewrites, or “limiting principles” that the Framers chose not to include.

We also might expect in an editorial on this important topic a reference to what the Commerce Clause actually says or an explanation of why serious conservatives, like senior Appeals Court Judge Laurence Silberman and Ronald Reagan’s Solicitor General Charles Fried, came down solidly on the side of the law’s constitutionality.

Silberman, a Reagan appointee, wrote the Nov. 8, 2011, ruling, for the U.S. Court of Appeals in Washington affirming the constitutionality of the Affordable Care Act. Silberman took pains to note the unrestricted wording of the Commerce Clause.

He wrote: “We look first to the text of the Constitution. Article I, § 8, cl. 3, states: ‘The Congress shall have Power . . . To regulate Commerce with foreign Nations, and among the several States, and with the Indian Tribes.’” [Emphasis added by Silberman]

Silberman continued: “At the time the Constitution was fashioned, to ‘regulate’ meant, as it does now, ‘[t]o adjust by rule or method,’ as well as ‘[t]o direct.’ To ‘direct,’ in turn, included ‘[t]o prescribe certain measure[s]; to mark out a certain course,’ and ‘[t]o order; to command.’

“In other words, to ‘regulate’ can mean to require action, and nothing in the definition appears to limit that power only to those already active in relation to an interstate market. Nor was the term ‘commerce’ limited to only existing commerce. There is therefore no textual support for appellants’ argument” that mandating the purchase of health insurance is unconstitutional.

Let’s hear that again: “There is therefore no textual support” in the Constitution for challenging the individual mandate as unconstitutional. At that point, “strict constructionists,” as all the GOP Five claim to be, should have begun folding their tent or got to work on a constitutional amendment to rewrite the Commerce Clause.

Instead, the GOP Five got busy “legislating from the bench,” demanding that the Obama administration provide some “limiting principle” to apply to the Commerce Clause that would differentiate health insurance (or the hundreds of other federal provisions that hinge on this clause) from Justice Scalia’s goofy what-if question about buying broccoli.

Nor did the Post’s editorialists address former Solicitor General Fried’s comments in a March 28 interview with the Post’s Ezra Klein. When asked about the “limiting principle” issue, Fried responded:

“The limiting principle point kind of begs the question. It assumes there’s got to be some kind of articulatable limiting principle and that’s in the Constitution somewhere. What Chief Justice John Marshall said in 1824 is that if something is within the power of Congress, Congress may exercise that power to its fullest extent. So the question is really whether this is in the power of Congress.

Fried also criticized some of the specific comments by the Court’s Republicans. “Justice Kennedy,” Fried noted, “said this fundamentally changes the relationship of the citizen to the government. That’s an appalling piece of phony rhetoric.

“There is an important change between the government and the system. It was put in place in 1935, with Social Security. And it said everyone has to pay into a retirement fund, and an unemployment fund. It was done when Medicare came in in the ’60s.

“That’s a fundamental change. But this? This is simply a rounding out in a particular area of a relation between the citizen and the government that’s been around for 70 years. Kennedy’s Tea Party-like argument that this fundamentally changing the relationship between government and the citizen? Well, I was very sorry to hear it.”

On policy substance as well as on constitutional principle, Fried was baffled by the Republican justices’ opposition to the law:

Fried also took aim at the right-wing Heritage Foundation, which originated the individual mandate idea as an alternative to Democratic proposals for either a single-payer system or employer-mandated insurance, but now heatedly opposes its own concept. Fried said:

“It was comical to read the Heritage Foundation’s brief attempting to explain why they were changing their position on this. Something needed to be done about this problem. Everyone understood that. So, the Heritage Foundation said let’s do an individual mandate because it keeps it within free enterprise. The alternative was single payer. And they didn’t want that, and I’m in sympathy with that.

“So now all of a sudden the free-market alternative becomes unconstitutional and terribly intrusive where a government imposition and government-run project would not be? I don’t get it. Well, I do get it. It’s politics.”

When asked if the Supreme Court observers, who had initially considered the constitutional challenge to the law frivolous, had “underestimated the politicization of the Judiciary,” Fried answered:

“Politics, politics, politics. You look at the wonderful decision by [federal Judge] Jeff Sutton, who is as much of a 24-karat gold conservative as anyone could be. He is a godfather to the Federalist Society. Look at his opinion [in the Sixth Circuit upholding the law]. Or look at Larry Silberman’s opinion. I don’t understand what’s gotten into people. Well, I do I’m afraid, but it’s politics, not anything else.”

Fried’s “politics, politics, politics” point would seem particularly clear given the fact that the individual mandate to buy insurance was first developed by Heritage and first adopted by a Republican governor (and current GOP presidential front-runner) Mitt Romney of Massachusetts as a way to prevent “free riders” from getting health care and passing the costs to others.

Indeed, President Obama embraced the mandate idea after opposing it during Campaign 2008 because he concluded that it was the only way he could hope to win the votes of some moderate Republicans and conservative Democrats. But once Obama supported the idea, Republicans denounced it as an “unconstitutional” affront.

Then, after the law’s difficult enactment two years ago, the Republicans ran to the courts to get it overturned although conservatives have traditionally decried people who seek court intervention rather than working out policy differences through the political system.

Though serious conservatives like Silberman, Sutton and Fried judged the challenge to be without merit, it received a friendly hearing by the GOP Five on the Supreme Court. It’s now expected that the GOP Five will get busy behind closed doors drafting some ruling that will insert some newly invented “rights” into the Constitution.

Despite this rather obvious politicization of the federal courts, the Washington Post’s editors are more upset that “some liberals” would suggest that cynical politics is at work here. Yet, however you spin what the GOP Five is doing, it sure doesn’t look like the behavior of principled “strict constructionists.”