One of the curious realities of modern America is how many people especially white males have been propagandized into siding with a “free-market” power structure that treats them like tissue paper, to be used and thrown away. Poet Phil Rockstroh says he encounters many such confused souls in his native South.

Although I have resided in New York City for many years, I was born in the Deep South. On a daily basis, I negotiate Manhattan’s gridded streets and avenues, yet, in many ways, the terrain of my heart still winds like an Indian trail through a pine forest. I visit the South on a regular basis; the stain of red clay will never be scoured from my soul.

To this day, I retain close ties to a number of Southern friends and contacts who did not ventured far from home. As the years trundled on, I’ve witnessed the quality of life and emotional well-being of these friends, hailing from both laboring and middle-class origins, experience a steep, accelerating decline. 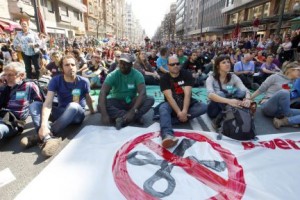 Occupy protesters in a sit-down protest in solidarity with a general strike in Spain. (Photo from OccupyWallSt.org)

I’ve gazed upon the tormented faces of men I know, now deep in middle age, who are facing the prospect of never again holding a steady job that affords them a sense of dignity. As a consequence, all too many of these men — men who I thought I knew well — have been rendered sullen, spiteful, and, much to my heart’s duress, an unreachable shell of their former self.

As their economic prospects diminished, their denial and displaced rage grew malignant. In the case of a couple of my friends, their resistance to reality became so vast, toxic, and all-encompassing that any attempt at dialog proved prohibitive.

Emblematic of this situation is my strained-to-the-limit friendship with Vince (not his real name) who, due to the carnage inflicted on the U.S. laboring class by so-called free market “values,” has been chronically under or unemployed since the Wall Street bankster-perpetrated crash of late 2008.

Yet Vince remains stubborn in his refusal to connect his dismal plight with the reality-resistant political notions he clutches. To this day, he describes himself as a “conservative libertarian — a proud believer in the values of the free market.” This conviction, coming from a member of the laboring class, is analogous to a slave proclaiming he is a believer in the auction block and the verities of his master’s whip.

Worse, as the day-to-day humiliations exacted by the corporate state continue to inflict deeper, more emotionally debilitating wounds, the more Vince reacts like a wounded animal lashing out at all but those who bestow him with the palliative of rightwing demagogic lies that distort the source of his suffering by means of directing his rage at a host of scapegoats i.e., phantom socialists (and, of course, their OWS dirty hippie dupes) whose, schemes, he insists, have denied him his rightful place among the serried ranks of capitalism’s legion of winners.

My apologies to Vince and all of his likeminded brethren of my native region: Although we rose from the same Southern soil, I’ve never had a knack for telling reassuring lies for conjuring the sort of displaced emotional resentments and engaging in the brand of bigot-whispering that is the stock and trade of contemporary red-state conservatives.

Conversely, I have shown some promise in encouraging people to embrace the reality of their circumstances, and passing on the hopeful news that they are stronger than they know. Withal, the act of carrying the burden of denial in a marathon flight from feelings of angst and despair is the force that exhausts one’s energy and demoralizes one’s spirit.

This is why such a large number of those whose lives have been degraded by the deprivations of the present economic order will not focus their anger at Wall Street grifters: If capitalism, by the very nature of the system, allows a swindlers’ class to not only legally exist — but to thrive — then it follows that there must be something flawed about the nature of capitalism itself.

Accordingly, a depressing revelation waits at the margins of Vince’s (and other downtrodden true believers in the existence of free-market fairy dust) sense of awareness: that the energies of one’s life have been devoted to the maintenance of an elaborate lie; not only have your labors been for naught — but your sacrosanct convictions have laid the groundwork for the crime that was committed against you. You have spent your life as an accessory to your own robbery.

Your faith in capitalism has left you in a similar position to the followers of a fanatical cult who were instructed to stand upon an isolated hilltop, so that, at midnight, as prophesied by their charismatic leader, their ranks will be lifted to heaven upon chariots of glinting gold but who now stand stoop-shouldered before the breaking dawn, shivering into the cold light of day.

Rather than admit error, one’s pride can compel one to blame phantom enemies for humiliating circumstances. Thus, as Vince’s prospects shrank, his gun collection grew to mini-armory proportions.

Perhaps, he believes the weapon’s heft in his hands will stem the inexorable drift of his life into purposelessness; perhaps, his firearms will bestow a sense of security, in a life buffeted by uncertainty; perhaps, if he squints down the site of his rifle long enough, he can target the phantoms that made off with his hopes.

Vince, old buddy, the solution is a great deal more accessible than that. To mitigate feelings of hopelessness attendant to isolation, the simple act of starting a conversation is helpful. The doable act of leaving the house and attending an OWS function can serve to transform gut-gnawing rumination into fruitful dialog thus, Vince, you will become enjoined in an ongoing conversation — a collaboration between your soul and the soul of life.

In this way, we can become part and parcel of the story of our times, part of a living tale, unfolding in the eternal present that will affect the future in ways unseen.

Still, I’ve learned, on an individual basis, I remain powerless against red-state belligerent ignorance of the collective variety. My experiences as a Southerner inform me the process of change will be difficult, because only cultural earthquakes alter the course of streams of surging stupid.

Sure, start a dialog with even the most obtuse tea-bagger sort attempt to convince him that the views he clutches are self-defeating try to disabuse him of his calcified bigotry — but don’t be optimistic about the outcome of your efforts.

Trouble is: Depressingly large numbers of people have invested a great amount of time, energy and identity in the maintenance of their reality-defiant attitudes. There is just too much fragile self-esteem, bulwarked by brittle pride, at stake.

While self-doubt is the worthy adversary of the wise, belligerent ignorance is the dubious ally of those who fear and resist self-awareness. Often, a journey towards self-knowledge and an attendant awakening to the nature of one’s condition can be unnerving and painful. The process is fraught with free-floating anxiety and weighted with saturnine regret.

If I’ve made numerous life-determining choices based on my acceptance of proffered falsehoods, then I have lost many years constructing my life accordingly. The grief can be overwhelming. What alms does one chant into the grieving dawn on the morning after one’s illusions have died?

This is why so many choose to spend their hours commuting through life in the company of the corpse of capitalism. Accordingly, the nation resembles the Bates Motel its spree-killer government reflected in the acts of its murder-prone citizenry e.g., Staff Sgt. Robert Bales and guarded gate, vigilante flake George Zimmerman.

When a system of governance loses its purpose for existence (when the system becomes a mindless self-perpetuating monster) its sustaining lies will be internalized and acted on by those governed. Militarized police units lower truncheons upon the heads of peaceful demonstrators, as individuals, unhinged by displaced grievances, mirror official policy in tragic acts of rage engendered by hopelessness.

We live in a culture that worships the god of violent death; of course, its sermons will be played out beyond the confines of its official temples, in the form of hideous bacchanals of spilled blood. The chickens come home to roost, and they are heavily armed and in the thrall of a violent psychotic episode.

Vince simply cannot wrap his corporate/police state colonized mind around the fact that, as is the case with any nation containing the vast amount of wealth inequity extant in the U.S., the elite will utilize the services of the police to achieve less than noble ends that police repression and violence will be exercised at a level equal to the lack of legitimacy of the governing class.

As we have witnessed in the case of the OWS movement and its encounters with police authorities, when members of the citizenry challenge the corrupt arrangement, dissenters will be met by brutal methods intended to crush those perceived as a threat to the existing order.

To Vince and any others still holding the quaint notion that the governing class of the U.S. possesses legitimacy, the actions of the NYPD testify to the contrary; their ongoing, brutal suppression of those attempting to exercise their right to dissent should disabuse you of that noxiously innocent fantasy.

When justice has been banished from the precincts of power, it must be reclaimed in the commons. Hence, occupy defiance. Make yourself at home on the premises, because, if you are outraged by oppression and you long for a more just world, you will be spending a good deal of your time in this location.

Vince, one day, upon your arrival, I hope to meet you there.

Phil Rockstroh is a poet, lyricist and philosopher bard living in New York City. He may be contacted at: phil@philrockstroh.com. Visit Phil’s website: http://philrockstroh.com/ or at FaceBook: http://www.facebook.com/#!/profile.php?id=100000711907499

17 comments for “Nature of Self-Defeating Convictions”