Joseph Kony, the brutal commander of the Lord’s Resistance Army, has been introduced to millions through a video on YouTube. But that denunciation of his war crimes skirts his claim to be motivated by Christianity, an omission not applied to violent extremists who embrace Islam, notes Mamoon Alabbasi.

There is no doubt that the 30-minute video “Kony 2012” by the advocacy group Invisible Children has raised much awareness regarding the relatively under-reported atrocities committed by the Ugandan rebel group, the Lord’s Resistance Army (LRA).

It is also true that the video, which boasts over 80 million views on YouTube so far, has been subjected to much I think fair scrutiny. Criticism of the motives, accuracy and objectivity of the video’s makers has stirred a rather healthy debate on the issue, where alternative ways forward were discussed. 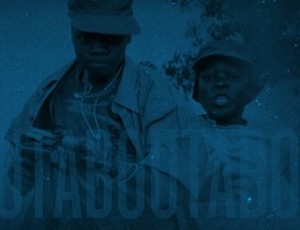 Graphic for the group, Invisible Children

However, I could not help but wonder how Invisible Children whose founders are reported to have evangelical leanings would have fashioned their video had the LRA been a Muslim extremist group (instead of being a Christian one, whose former name was the “Uganda Christian Democratic Army”).

I am not suggesting here that the group’s professed Christian beliefs are behind their abduction and enslavement of more than 30,000 children over the period of 25 years, where some of the boys become child soldiers, forced or brainwashed into murdering their own parents, and many of the girls end up as sex slaves after being captured.

The LRA fighters would chop off the arms, legs or ears of their victims. Sometimes they would padlock their lips. As a result of their terrorising violence, hundreds of thousands of people have been displaced.

The group does bizarrely claim to be fighting for the establishment of the rule of the Ten Commandments in a theocratic Uganda (although they have been active in three other African countries: South Sudan, the Democratic Republic of Congo and Central African Republic).

But in the video, you hear the claim that the LRA leader is “not fighting for any cause but only to maintain power” (without any mention of the group’s own proclaimed reasons). That may very well be true of many fanatics around the world, but how many of those would have their religious views deleted from a critical video (maybe to avoid confusing their extreme interpretation with that of the mainstream understanding of a religion)?

Not many Muslim ones, I would argue. Even the full name of the group the Lord’s Resistance Army was not even pronounced once (although it did appear in writing) during the whole video. Instead you only hear the LRA acronym. Perhaps the video makers did not wish to “take the Lord’s name in vain.”

According Vincent Otti, the now deceased second-in-command of the group, the LRA is “fighting in the name of God. God is the one helping us in the bush. That’s why we created this name, Lord’s Resistance Army.

The above quote suggests that the enemies of the LRA are not “innocent” and therefore killing them is justified. And Joseph Kony, a former Catholic preacher, is himself reported to use biblical references mainly passages from the Pentateuch to justify mutilation and murder.

Elaborating on that logic, one of Kony’s most trusted commanders, named Moses, was quoted as saying: “If someone has done something bad to you, you have to kill them! Go and read in Matthew, chapter what and what, it is stated that if your right hand causes trouble, cut if off! It is there in the Bible!”

Kony is reported to have named one of his sons “George Bush,” and although the former U.S. president certainly does not condone the LRA (which is more than can be said for the American Christian conservative Rush Limbaugh who had defended the group in a radio gaffe), both men Kony and Bush claim to receive direct messages from God.

In addition to the overtly religious rhetoric of LRA leaders, testimonies from boys who have escaped from the grip of the terror group point to religious symbolism, where the child soldiers would make cross signs on their chests, foreheads, shoulders and guns, using special oil that is said to have the power of the Holy Spirit. And they were told that those who die from all sides must have broken religious commands.

Of course the LRA’s mystic brand of Christianity is different from the mainstream understanding of the faith (although that too had long been abused to promote terror). And the reality is that the conflict involving the LRA has never really been of a religious nature. It is much more complicated than that.

But that’s true of many violent groups who use religious rhetoric to make political points. These groups, like the LRA, can be found making strange bedfellows sometimes forging unexpected alliances and fighting unlikely enemies.

However, if any group professed to have committed some of the aforementioned atrocities in the name of Islam regardless of how far such actions are from the mainstream of that religion it is quite common that the faith (and by extension everyone who believes in it) would take the blame.

It would not be about one man or his army gone mad or on a quest for power, as the video suggests about the Lord’s Resistance Army.

Mamoon Alabbasi is a news editor and translator based in London. His Op-eds, reports, and reviews have appeared in a number of media outlets.