Exclusive: In facing down Iran as U.S. president, Mitt Romney says he would be guided by the experience of Ronald Reagan threatening Iran with a military strike if it didn’t free 52 Americans held hostage during Jimmy Carter’s presidency. But Romney’s historical precedent is a fantasy, writes Robert Parry.

Republican presidential front-runner Mitt Romney has taken a page from right-wing mythology as the foundation for his tough-guy policy toward Iran, citing the supposed “history” of Ronald Reagan scaring the Iranians into releasing 52 American hostages on Jan. 20, 1981.

This account of a macho Reagan staring down the Iranians after they had mocked Jimmy Carter for 444 days is a cherished canard of the American Right, reprised again Tuesday in Romney’s Washington Post op-ed, which states:. “Running for the presidency against Carter [in 1980], Ronald Reagan made it crystal clear that the Iranians would pay a very stiff price for continuing their criminal behavior.” 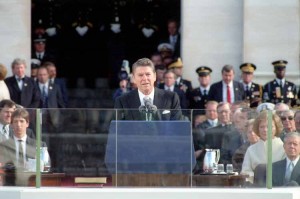 But that swaggering tale of Reagan’s toughness is not supported by the historical record. Not only does the overwhelming evidence now show that Reagan’s campaign team negotiated secretly behind President Carter’s back to undercut his efforts to free the hostages, but Reagan then followed up their release by authorizing secret shipments of weapons to Iran via Israel.

In other words, instead of bullying the Iranians over their hostage-taking, Reagan rewarded them. And those shipments did not begin in 1985, with the Iran-Contra arms-for-hostage deals, but rather almost immediately after Reagan took office in 1981, according to a number of Israeli and U.S. government officials.

For instance, Israeli arms dealer William Northrop claimed in an affidavit that that even before Reagan’s inauguration, Israel had sounded out the incoming administration regarding its attitudes toward more weapons shipments to Iran and got “the new administration’s approval.”

By March 1981, millions of dollars in weapons were moving through the Israeli arms pipeline, Norththrop said, including spare parts for U.S.-made aircraft and tons of other hardware. Northrop added that Israel routinely informed the new Reagan administration of its shipments.

(Northrop was indicted by the U.S. government in spring 1986 for his role in allegedly unauthorized shipments of U.S. weapons to Iran, but the case was thrown out after Reagan’s Iran-Contra arms deal with Iran was exposed in fall 1986).

On July 18, 1981, one of Israel’s secret weapons deliveries to Iran went awry. A chartered Argentine plane strayed off course and crashed (or was shot down) in Soviet territory, threatening to reveal the clandestine deliveries, which surely would have outraged the U.S. people if they had learned that Israel was supplying weapons to Iran with Reagan’s secret blessing just months after the hostage crisis had ended.

After the plane went down, Nicholas Veliotes, a career diplomat serving as Reagan’s assistant secretary of state for the Middle East, tried to get to the bottom of the mysterious weapons flight.

“We received a press report from Tass [the official Soviet news agency] that an Argentinian plane had crashed,” Veliotes said in a later interview with PBS “Frontline” producers. “According to the documents this was chartered by Israel and it was carrying American military equipment to Iran.

“And it was clear to me after my conversations with people on high that indeed we had agreed that the Israelis could transship to Iran some American-origin military equipment. Now this was not a covert operation in the classic sense, for which probably you could get a legal justification for it. As it stood, I believe it was the initiative of a few people [who] gave the Israelis the go-ahead. The net result was a violation of American law.”

The reason that the Israeli flights violated U.S. law was that Reagan had not given formal notification to Congress about the transshipment of U.S. military equipment as required by the Arms Export Control Act. If he had, the embarrassing reality of the arms pay-off to Iran would almost surely have leaked — and questions might have been asked about why Reagan was making the pay-off in the first place.

In checking out the Israeli flight, Veliotes came to believe that the Reagan camp’s dealings with Iran dated back to before the 1980 election.

“It seems to have started in earnest in the period probably prior to the election of 1980, as the Israelis had identified who would become the new players in the national security area in the Reagan administration,” Veliotes said. “And I understand some contacts were made at that time.”

Veliotes: “Between Israelis and these new players.”

Veliotes added that the embarrassing facts about the downed plane were obscured by Reagan’s State Department, which issued misleading guidance to the U.S. press.

In my work on the Iran-Contra scandal in the 1980s, I also had obtained a classified summary of testimony from a mid-level State Department official, David Satterfield, who saw these early arms shipments as a continuation of Israeli policy toward Iran.

“Satterfield believed that Israel maintained a persistent military relationship with Iran, based on the Israeli assumption that Iran was a non-Arab state which always constituted a potential ally in the Middle East,” the summary read. “There was evidence that Israel resumed providing arms to Iran in 1980.”

Over the years, senior Israeli officials have claimed that those early shipments, which Carter had tried to block, received the blessing of Reagan’s team.

In May 1982, Israeli Defense Minister Ariel Sharon told the Washington Post that U.S. officials had approved Iranian arms transfers. “We said that notwithstanding the tyranny of [Ayatollah Ruhollah] Khomeini, which we all hate, we have to leave a small window open to this country, a tiny small bridge to this country,” Sharon said.

A decade later, in 1993, I took part in an interview with former Israeli Prime Minister Yitzhak Shamir in Tel Aviv during which he said he had read Gary Sick’s 1991 book, October Surprise, which made the case for believing that the Republicans had intervened in the 1980  hostage negotiations to disrupt Jimmy Carter’s reelection.

With the topic raised, one interviewer asked, “What do you think? Was there an October Surprise?”

“Of course, it was,” Shamir responded without hesitation. “It was.”

Iran-Contra special prosecutor Lawrence Walsh also came to suspect that those later arms-for-hostage deals traced back to 1980, since it was the only way to make sense of why the Reagan team kept selling arms to Iran in 1985-86 when there was so little progress in reducing the number of American hostages then held by Iranian allies in Lebanon.  When one hostage was released, another was taken.

“Were you ever involved in a plan to delay the release of the hostages in Iran until after the 1980 Presidential election?” the examiner asked. Gregg’s denial was judged to be deceptive. [See Final Report of the Independent Counsel for Iran/Contra Matters, Vol. I, p. 501]

So, the historical evidence suggests that the dramatic timing of Iran’s hostage release as Reagan was giving his Inaugural Address was not the result of the Iranians fearing Reagan’s retaliation, but rather was a choreographed P.R. event between Reagan’s team and the Iranians.

In the days before Reagan’s Inauguration, his acolytes had been busy circulating a joke around Washington which went: “What’s three feet deep and glows in the dark? Tehran ten minutes after Ronald Reagan becomes President.”

Instead the Iranians released the hostages at the moment most favorable to Reagan to enhance his standing with the American people as someone whom America’s enemies feared. Republicans got busy working the myth of the Mighty Reagan while Reagan’s team quietly approved Israeli-brokered weapon sales to Iran.

Now, this mythology has found a new place in Romney’s campaign, which has entrusted its foreign policy largely to neoconservatives who came of age during the Reagan administration in the 1980s and helped shape George W. Bush’s foreign policy last decade. In part, here is what Romney published in Tuesday’s Washington Post:

“Beginning Nov. 4, 1979, dozens of U.S. diplomats were held hostage by Iranian Islamic revolutionaries for 444 days while America’s feckless president, Jimmy Carter, fretted in the White House. Running for the presidency against Carter the next year, Ronald Reagan made it crystal clear that the Iranians would pay a very stiff price for continuing their criminal behavior.

“On Jan. 20, 1981, in the hour that Reagan was sworn into office, Iran released the hostages. The Iranians well understood that Reagan was serious about turning words into action in a way that Jimmy Carter never was.

“America and the world face a strikingly similar situation today; only even more is at stake. The same Islamic fanatics who took our diplomats hostage are racing to build a nuclear bomb. Barack Obama, America’s most feckless president since Carter, has declared such an outcome unacceptable, but his rhetoric has not been matched by an effective policy.

“While Obama frets in the White House, the Iranians are making rapid progress toward obtaining the most destructive weapons in the history of the world.

“The overall rubric of my foreign policy will be the same as Ronald Reagan’s: namely, ‘peace through strength.’ Like Reagan, I have put forward a comprehensive plan to rebuild American might and equip our soldiers with the weapons they need to prevail in any conflict. By increasing our annual naval shipbuilding rate from nine to 15, I intend to restore our position so that our Navy is an unchallengeable power on the high seas.

“My plan includes restoring the regular presence of aircraft carrier groups in the Eastern Mediterranean and the Persian Gulf region simultaneously. It also includes increasing military assistance to Israel and improved coordination with all of our allies in the area.”

Sometimes, I’m asked why I have worked so hard trying to get the history of the Reagan era correct. The question often goes: “Why not leave that to the historians?” In the tone, there is a suggestion that this history is not as important as investigating current events.

But my concern is this: If the bogus history is allowed to stand unchallenged today, the Reagan mythology will continue to control how many Americans perceive their recent past and thus this propaganda will keep influencing the present and the future.

Romney’s op-ed is a good example of the price the nation and the world might pay for the tendency of many Americans (including prominent Democrats) to duck difficult confrontations with Republicans over a truthful accounting of the Reagan history.

With the Reagan myth lovingly protected by Republicans (and rarely contested by Democrats), it can become a touchstone for dangerous policies, now and in the future, both foreign and domestic.