From the Archive: Ex-Sen. Rick Santorum’s accusation that President Obama follows a “phony theology,” one not “based on the Bible,” revives the right-wing notion that the United States must be a “Christian nation” and that “separation of church and state” is a “myth,” a topic that Baptist Minister Howard Bess addressed in 2011.

Most people do not realize the meaning of being a Baptist. Theologically, we cover the full spectrum from right to left. We are scattered politically throughout Republicans, Democrats, Tea Partiers and None of the Above. Our hallmark is freedom.

Differing opinions are our strength, and we feel free to speak what other religious folk might call heresy. We are suspicious of all hierarchies, and when we feel our freedom is being challenged, we are quick to start another church. Baptist of course. There are far more varieties of Baptists than all the products that will ever be produced by Heinz. 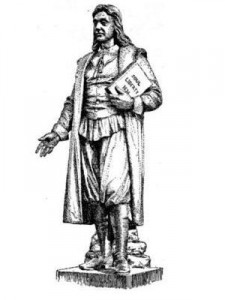 Though we now cover the world, Baptists are a uniquely American phenomenon, dating back to early colonial days when Roger Williams was driven out of Massachusetts by the Congregationalists. (Ironically, these Massachusetts Puritans had fled England to avoid persecution for their religious beliefs, only to land in America and begin persecuting others for their religious beliefs.)

In 1636, Williams founded Providence Plantation, the first American colony truly dedicated to the free practice of religion (though even in Rhode Island, Jews and Catholics were looked upon with suspicion).

Though Williams started the first Baptist church in America in Providence, I believe Baptists made their finest contribution to American life in Virginia in the years after the Revolution. The new United States, with 13 member states, did not know what to do with religion in America. Though Thomas Jefferson was the country’s most prominent advocate of freedom of religion, another important figure was his neighbor, James Madison.

Neither Jefferson nor Madison liked what was going on in Virginia. At the time, Baptist preachers and other dissenters were required to get a government issued license to preach. Naturally the Baptist preachers kept on preaching without benefit of a license leading to whippings, fines and jail time. Still, they continued to preach.â€¨  â€¨One firebrand preacher named John Leland became friends with Madison and convinced him that there should be no state church, that a complete separation between church and state was the only answer.

This wall of separation was born in Virginia and a Baptist was the prime mover. Subsequently, this principle was embedded in the First Amendment to the U.S. Constitution with the mandate that “Congress shall make no law respecting an establishment of religion, or prohibiting the free exercise thereof.”

Since then, Baptists have remained in the forefront of the struggle to keep government out of religion. Our watchdog agency is the Baptist Joint Committee, a powerful Washington, D.C., lobby that regularly presents briefs before the U.S. Supreme Court. BJC, now 75 years old, keeps Baptists across the country informed about the constant stream of religious freedom cases that come before the High Court.

Without congressional approval or oversight, President Bush by executive order established a whole new federal agency, called the White House Office of Faith-based and Neighborhood Partnerships. Under it, President Bush was able to funnel hundreds of millions of dollars to faith-based organizations.

On one level, the idea is not a bad one. Many faith-based agencies do wonderful work with people with special needs. Many times they have been shown to do tasks better and more effectively than government agencies. However, under the Bush program, violations of church-and-state separation were numerous. Large block grants were made to religious organizations with little oversight.

After taking office, President Obama endorsed the program but promised new regulations and better oversight. He issued the new policies, forbidding organizations to engage in explicitly religious activities. Government-funded programs must not include religious content. Many observers had hoped Obama would go further and require religious organizations to form separate not-for-profit entities. He chose not to take that step, while promising to closely monitor the programs and to require transparency in their operations.

The other looming issue is how the United States will treat the expanding religious diversity in America. Will government treat all religions evenhandedly or will some face discrimination? House Speaker John Boehner and Rep. Peter King, chairman of the House Homeland Security Committee, called for investigation of “radical” Muslims. Dare the Federal government investigate those of a particular religious persuasion?

J. Brent Walker, Executive Director of BJC, commented: “Ours is not a Christian nation, as some contend, but made up of many faiths, including now 17 percent who embrace no faith at all. Our plush pluralism is something to be celebrated, not something to be feared. And our biggest challenge today may be how we view Islam and treat our Muslim friends.”

I am pleased to be a part of a tradition that celebrates religious freedom. Diversity is good for us all.

The Rev. Howard Bess is a retired American Baptist minister, who lives in Palmer, Alaska. His e-mail address is hdbss@mtaonline.net.

← Taking a Bite Out of Apple
CNN Silences War-Skeptical Soldier →

12 comments for “The Roots of US Religious Tolerance”