A key justification for three recent U.S. military actions in Afghanistan, Iraq and Libya was to oust brutal dictators and pave the way for a more democratic future. But these violent strategies have fallen short on the pro-democracy front, writes the Independent Institute’s Ivan Eland.

Despite George W. Bush’s and Barack Obama’s efforts to topple foreign dictators and use military power to forcefully impose democracy from without, democracy usually works better if it bubbles up from below by popular desire.

In Iraq, even before U.S. forces had withdrawn, Shi’ite President Nouri al-Maliki was taking the country back toward dictatorship. Now that American forces are gone, with attempts to arrest the Sunni vice president and the detention of other prominent Sunnis, Maliki is accelerating the process. 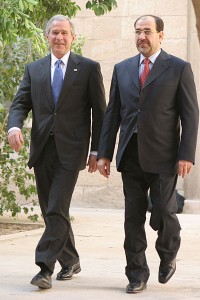 Meanwhile, the radical Sunni group al-Qaeda in Mesopotamia is stepping up attacks on Shi’ites, hoping to re-ignite the sectarian civil war of 2006 and 2007. With Iraq’s long history of rival ethno-sectarian groups in conflict, Sunni dictators, and no culture of political compromise needed for democracy, the prospects for an imposed democracy taking root were never great.

In Afghanistan, the situation is even worse, because opposition to the U.S.-installed government, by the Taliban, is even stronger, and that government is seen by most Afghans as corrupt and ineffective.

Although three attempts by the British and one by the Soviets to bend notoriously independent and ferocious Afghans to an external will failed, the irrepressible arrogance of American foreign policymakers led them to think that the outcome would be different when the United States tried to install democracy there 10 years ago.

Although winning the “hearts and minds” of the local population is the most important objective in any counterinsurgency war, the U.S.-led coalition is so unpopular that even Afghans getting most of the largesse, the Afghan security forces, hate coalition forces so much that the former are killing the latter in record numbers for allies in modern military history.

The U.S. military continues to tout gains against the Taliban in southern Afghanistan, but the most dangerous insurgency has always been in eastern Afghanistan. Besides, the pattern in many counterinsurgency wars is that the weaker guerrillas give ground when the stronger occupying force is on the offensive. The guerrillas bide their time until the occupier moves elsewhere, then they filter back and wait for the eventual departure of the occupier from the country.

Because the United States has willingly obliged the Taliban by announcing that it will turn over security to the Afghan government and withdraw forces in 2014, the Taliban has no incentive to meaningfully negotiate a peace agreement. Like the North Vietnamese, the Taliban has merely “gotten smart” and is pretending to make moves toward negotiations while continuing to outwait the Americans. In the future, the Taliban will likely have a role in governing some or all of Afghanistan.

And it seems that the situation in post-Gaddafi Libya is beginning to unravel. There, an indigenous uprising prompted the West to bomb for successful regime change.

But local protesters recently stormed the Benghazi office of the governing National Transitional Council (NTC) while the chief of that rickety government was inside, local militias in the city of Bani Walid revolted against a pro-government militia and are now governing the town, and the weak NTC forces have been unable to disarm factional militias around the country. Like Iraq, Libya has many armed factions and no tradition of democracy. Libya could easily lapse into tribal warfare.

On the other hand, the indigenous democratic revolutions in Tunisia and Egypt seem to be progressing. Tunisia recently had successful elections, and Egypt seated its new parliament and will hold a presidential election in June.

In Tunisia, Islamists won the recent election but have paired with more liberal parties to form a coalition government. Although the Egyptian parliament is dominated by Islamists, the Muslim Brotherhood, the group that has a plurality in the legislative body, has gone “mainstream” and is cooperating with the military council’s timetable for transition to civilian rule.

Although bumps on the road may arise and both of these countries may not have completely Western-style liberal democracies, their prospects for being long-term democracies look much brighter than in the three countries in which outside force was used to remove oppressive regimes.

3 comments for “Failure of ‘Pro-Democracy’ Wars”