Rick Santorum, the latest Republican “flavor of the month” for president, exudes a boyish enthusiasm that many Americans find personally appealing. But his vision for America would combine a moralistic theocracy with free-market capitalism and perpetual war, a nightmarish scenario, says Lawrence Davidson.

Former Pennsylvania Sen. Rick Santorum is a Republican presidential candidate who is fast coming to the fore. He won the Republican caucuses in Iowa (albeit by only 34 votes) in early January and in February won contests in Colorado, Missouri and Minnesota. So, as the question goes, who is this guy?

Santorum is a self-styled “true conservative,” right-wing, Christian fundamentalist of Catholic background. In 2005, Time Magazine called him “one of America’s 25 most influential evangelicals.” That is still certainly true today. 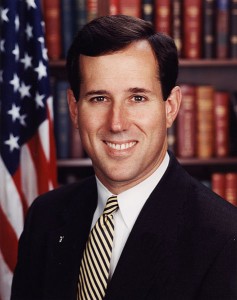 Santorum believes that religious values (at least his religious values) should play a large role in shaping government policies. For those not sure what this means, Santorum has a list of examples:

1. Santorum wants “a blanket ban on abortions.” The fact that the U.S. had this very same prohibition up until 1973, and the result was black-market abortions that killed not only fetuses by also lots of pregnant women, seems to have escaped the former senator’s attention.

When Santorum gets on the subject of homosexuality, one can’t help noting a tinge of hysteria, along with a generous helping of illogic and exaggeration. Santorum would probably try to ban other related activities, such as the use of contraceptives to prevent pregnancy. He certainly wants to get rid of Planned Parenthood.

What this adds up to is that when Santorum says religious values should play a greater role in government policy, he means that there should be lots of laws regulating your personal life, particularly your sex life. This is pretty typical of religious fundamentalists, particularly American Christian ones. They just can’t leave other people’s bedrooms alone.

On the economic side of the ledger, Rick Santorum takes a slash-and-burn approach.

1. There should be a $5 trillion cut in the federal budget (but defense spending would be held at present levels). In order to realize this, Santorum would do away with, greatly reduce or freeze the Environmental Protection Agency, healthcare reform and Medicaid, subsidies for housing, food stamps, job training, energy and education. He would “reform” Medicare and Social Security in draconian fashion and pass a balanced budget amendment.

One might agree that the present U.S. federal deficit verges on the insane and still find Santorum’s cure equally crazy. For instance, just about holding exempt defense and “security” spending — when combined they make up 20 percent of the budget and are notorious for waste, redundancy and corruption — makes no sense.

2. According to Santorum, there should be an elimination of financial and other regulatory laws. This is true insanity. Regulation is the only thing that makes capitalism an enduring system. Eliminate it and you have financial crashes, dangerous sweatshop working conditions, falling wages and benefits, runaway corruption and theft and, ultimately, depression. That Santorum cannot understand this suggests that he has substituted a discredited free-market ideology for history.

3. Santorum says that as a nation Americans should “live within our means” and if we do so “future generations will have a brighter future unburdened by oppressive debt and high taxation.” These are fine slogans, but in practice they probably spell eventual revolution in the streets.

If you reduce the debt by slashing expenditures Santorum-style while refusing to increase taxes, you will eliminate almost all of society’s safety nets. That means increasing poverty and all its attendant miseries. You will also make infrastructure maintenance much more difficult.

Someone should tell Mr. Santorum that the U.S. population is not over-taxed. Out of 62 industrialized countries, the U.S. ranks 28th in terms of its income tax rates. It is, of course, possible to over-tax a people to ruination. It is also possible to under-tax a people to ruination to tax so low that you can’t assist the less fortunate or fix the pot holes and keep the bridges from collapsing.

If Santorum was to get his way the nation would not have his predicted “brighter future.” More likely it would be a future of more poor and more pot holes. That might well lead to disillusionment with the capitalist system among both the lower- and middle-classes. (Personally, I have no objection to such growing disillusionment. I would, however, like to minimize the suffering and violence that surely goes along with it.)

When it comes to foreign policy, Santorum is a warmonger plain and simple.

1. As to Iran, Santorum would “work with Israel to determine the proper military response needed” to put a end to that country’s nuclear weapons program. It seems not to matter to the former senator that every U.S. intelligence agency that has ever investigated this issue has determined that there is no evidence that Iran is pursuing a nuclear weapons program.

2. As to Syria, Santorum would go after the strongman (Bashar al-Assad) “covertly or otherwise.” Does that mean that Santorum act-alikes at the helm of other nations could use the same logic to go after a U.S. president?

3. As to Iraq, Santorum would “continue to stabilize Iraq” presumably by re-invading the country. This belies the fact that it was the American policy of draconian sanctions and ultimate invasion that destabilized Iraq in the first place.

4. As to Afghanistan, Santorum would set no time lines or limit resources “in the war effort.” Yet, if al-Qaeda is as weakened as Washington claims, there seems to be little point in more war. If a stable and competent Taliban government reappears in Afghanistan, it is unlikely to invite future attacks by providing a haven for terrorist organizations. On the other hand, this on-going war is almost certainly providing a breeding ground for more terrorists.

5. As to Islam, Santorum believes it is a religion that is “stuck in the seventh century.” With rare exception, such as Saudi Wahhabism, this is untrue. Actually, it is Rick Santorum who is stuck in the past. It is he who, like some political ecclesiastic, wants to regulate everyone else’s lives. If Mr. Santorum simply changed hats from Christian to Islamic he could be a Saudi cleric. Compared to people like him, most Muslims are much more tolerant and contemporary.

6. As to Israel, Santorum takes an uncritically approving position on the Zionist state. This makes sense when you realize that Israel is essentially a religious state a nation on the brink of becoming a theocracy, which is where Santorum presumably would like to steer the United States..

Rick Santorum is a religious ideologue. He wants to turn the U.S. into a “faith-based” Christian country through the imposition of those “family values” he personally has decided are God-given. He believes that America’s Founding Fathers would agree because they were, supposedly, men of faith just like him.

Quoting the Declaration of Independence to prove this point, Santorum reminds us that it says that people “are endowed by their Creator with certain inalienable rights.” From this he concludes that rights come from God and not from government. Government’s role is simply to implement and protect those divine rights.

The truth is that the man who penned the Declaration, Thomas Jefferson, was nothing like Rick Santorum. He wasn’t even a Christian. He was a Deist. Jefferson’s phrasing was meant to impress a wider world in an age when religion was interpreted in a more literal fashion than it is in today’s United States. Jefferson certainly did not mean for Americans to take the notion of God-given inalienable rights literally. After all, he was a slave-holder.

The number of Americans who respond positively to Rick Santorum’s message is probably in the range of 20 percent. In terms of the Republican Party, they probably represent about one-third of the membership. Being ideologically driven, these people are motivated to vote. And, that is significant in a nation where voting turnout is traditionally low.

So, Rick Santorum is certainly representative of a politically active part of the U.S. population a dangerous, intolerant, noisy, in-your-face part. If we let him and his followers get their way, the result will be ever greater divisiveness and decline at home, and war abroad. That is a choice for the rest of us.