Failed businesses like failed foreign policies can’t or won’t see around the next corner where unexpected challenges lie. Often the myopia results from a focus on the next quarter or the next election, a shortsightedness that now risks sending the U.S. off to a new war, with Iran, writes Danny Schechter.

The TV series “House of Lies” is about business but it could as easily be about government and foreign policy.

In a recent episode, one of the management consultants pitches a company about the need to launch a new product.  She recounts the story of the Polaroid Company, known as the Apple of its day, widely admired for the cool design of its instant cameras.

When I lived in Cambridge Massachusetts, Polaroid was one of the town’s biggest employers, an economic powerhouse. But it failed to see new competitive products on the horizon. It only saw the future as its past. It went bankrupt last decade. 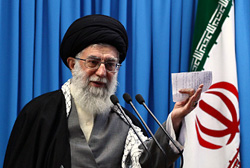 That seems to be the case of our own bankrupt foreign policy that operates with a limited playbook of negative “options” build around threats, warnings, covert actions and military adventures. The gap between what we say and what we do has become a chasm. U.S. foreign policy has become a paper tiger, in words first coined by Chairman Mao.

Here’s President Obama counseling Israel, a nuclear power, not to attack Iran which it fears could become one.  No one mentions that nuclear deterrence has been a cornerstone of U.S. policy since we became the first and only nation to drop a nuclear bomb on civilians.

In some ways, the mad policy of “Mutually Assured Destruction” (MAD) kept the nuclear peace since the 1940s. To date the U.S. has opposed tougher UN rules to stop nuclear proliferation when it involves our allies or us. Now, to keep the peace and stop a war on Iran, President Obama says we should practice “diplomacy.”

Will it be diplomacy like Nixon used on “Red” China that led to a reversal of decades of isolation and included mutual recognition and booming trade? (Without China, our economy would be in a deeper depression than it is today.) Nope, not that kind of diplomacy.

Obama has gone back further to the failed policy of embargo and isolation that was supposed to bring the Cuban Revolution to its knees in the 1960s.  Now, six decades later, Cuba has reformed but not changed its system while we still refuse to officially recognize its existence.

Our country, born in revolution, still won’t recognize Iran’s Revolution of 33 years ago either, Instead, in the name of diplomacy, the White House has released an executive order imposing tough new sanctions on Tehran.

When I asked Iran’s President Ahmadinejad during a very recent trip there if he would talk to Washington, he told me that Washington wouldn’t talk to him or his government. So much for diplomacy!

Does anyone remember how covert diplomacy with Iran in 1980 delayed the release of the hostages, a maneuver that helped conservative hero Ronald Reagan win election?

Instead, of any diplomacy, the United States is sending more Naval armadas to surround Iran while it is suspected that Israel has been assassinating its scientists and sabotaging its nuclear program with sophisticated viruses (and bombs). Everyday new bombing threats are being heard, shades of John McCain singing “Bomb, Bomb, Bomb Iran.” Hahaha!

To my surprise, most of the Iranians I spoke to at a recent conference that I attended in Tehran seemed not as alarmed as I thought they would be. Most, naively perhaps, believe that the U.S. or Israel would not dare attack Iran because it is too strong and will retaliate.

That is certainly the rhetoric we are hearing from the country’s Supreme Ruler Khomeini. His response to sanctions seems to be “bring them on,” arguing they will only force Iran into becoming stronger militarily and more self-reliant economically. He has responded to our threats with some of his own, taking tough about supporting resistance to Israel and countering U.S. initiatives. His hard line is becoming harder in response to ours.

However, the New York Times reports growing anxiety among Iran’s middle classes. Already there have been reports of new military maneuvers by Iran and U.S. troops being dispatched to islands off the coat of Yemen, near Iran. Under Republican and Israeli criticisms, Obama feels he has to appear even tougher.  “Appear” is the operative word.

Remember that saying, “When the going gets tough, the tough get going.” But where are we going?

Rather than relax tensions, U.S. style diplomacy is raising them to higher levels accompanied by escalating media propaganda built on calculated leaks by “intelligence experts” warning of imminent Iranian attacks on the U.S. The less the evidence, the more psy-ops rumors become news.

There are even reports of Iran is unleashing Al Qaeda terrorists even though Tehran has jailed many and is ideologically at odds with the Saudi-oriented Wahabi brand of Islam favored by the late Sheikh bin Laden.

The Wall Street Journal ran a full-page story Monday on “U.S. Fears Iran’s Links to Al Qaeda.” That was the headline. In the body of the story, unnamed US officials were quoted downplaying the link and dismissing the idea. One said: “There is not significant information to suggest a working relationship between Iran and al Qaeda.” (Excuse me but hasn’t Obama also been implying that by killing bin Laden, al Qaeda has been contained as a threat?)

The Journal also quotes Hilary Mann Leverett, a National Security aide in the Clinton and Bush Administrations. She says bluntly, “I think (there) is a war-fevered hysteria going on now. A lot of this stuff is really flimsy and is really questionable.”

Questionable or not, deceptive claims are making headlines and feeding more hysteria that could lead to the very military actions that Obama is saying he doesn’t support.

The late Richard Nixon used to approach diplomacy by drawing three columns on a piece of paper. One said, “What We Want,” the second, “What They Want,” and the third, “What can we agree on?” Obama seems to have only one column on his agenda: “How can I get reelected,” a goal he says humbly he feels he “deserves.”

Right now, he and Secretary of State Hillary Clinton are pandering to the Right and the Israeli Lobby while pretending to cut military spending. As the objective situation becomes more dangerous, all this game playing aimed at perception management goes on.

We are talking here about more than a conflict with a country we have had a conflict with for decades but the danger of a third world war. China and Russia are not exactly on board the U.S. escalation train. Iran’s neighbors don’t need new tensions in the region because they have plenty of their own.

Is our past once more destined to become our future?

Filmmaker Danny Schechter is just back from a visit to Iran. Access to his News Dissector blog seems to be blocked so he will be posting on http://mediachannel1.org Comments to dissector@medachannel.org.

← Putting US Security First?
Ginning Up ‘War’ on the Catholic Church →