Exclusive: Republican presidential hopeful Newt Gingrich has built his political career on demonizing those who disagree with him. Off-handedly, he will accuse fellow Americans of possessing the most heinous motives for their actions, now even taking aim at medical researchers, notes Robert Parry. 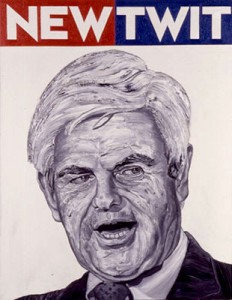 That comment on Saturday at a Baptist church in Winter Park, Florida, got the applause that he apparently was hoping for and maybe some votes from Christian fundamentalists who object to the experimental use of embryos, even ones destined for destruction at fertility clinics. However, in doing so, Gingrich put on display, again, his casual use of ugly language to demean fellow Americans.

For Gingrich, it is not enough to disagree with embryonic research. No, the researchers must be part of some plot “to desensitive society over the killing of babies.” In other words, these scientists must be some of the most despicable monsters imaginable, deserving of whatever awful fate one would deal them.

This sort of hate talk is what gets some unstable person to take out a gun and start shooting, as we have seen tragically in the United States in recent years. Of course, the practitioners of hate speech are never responsible. Who could have imagined that someone would act on these incitements to hate?

And, Gingrich’s use of such language is not just a slip of the tongue by an over-eager candidate. It is a calculated strategy, honed over decades, to attach grotesque language to an opponent, marking the person as someone unworthy of living or at least living inside “normal” society. Gingrich talk also has become the common language of right-wing talk radio and Fox News.

Yet, ironically, Gingrich and other practitioners of this dark art form are extremely thin-skinned if anyone tries to paint them with their own brush. Gingrich has spent much of the early Republican primaries whining about how unfair it’s been that rival Mitt Romney has pointed out negative moments in Gingrich’s checkered career.

More broadly, right-wing talkers, who regularly question the Americanism of President Barack Obama and political “lib-rhuls,” cry foul when anyone mentions how the Right’s policies have harmed the Great American Middle Class by shifting society’s benefits almost exclusively to the upper one percent. That’s “class warfare” and so wrong!

But it’s entirely okay for Gingrich and his allies to say whatever ugly thing comes into their minds about their opponents. Indeed, ugly words are part of the strategy, as was explained in a pamphlet entitled “Language: A Key Mechanism of Control,” produced by GOPAC, Gingrich’s political action arm.

Gingrich also mastered the art of exaggerating an opponent’s smallest ethical misstep into the most extreme crime. He targeted House Speaker Jim Wright, D-Texas, over a minor book deal that involved some supporters buying the book in bulk. Though the “scandal” was tiny compared to the kinds of lucrative influence-peddling that Gingrich and many other pols have engaged in, the intensity of the attacks on Wright essentially destroyed his political career.

But running Wright out of office and hyping minor flaps like the congressional “banking scandal” for partisan gain served “the larger good” of tearing down the longstanding working relationships that had allowed for compromise on Capitol Hill. Gingrich saw burning down congressional bipartisanship as the way for the Republicans (and himself) to gain power, even if that meant governing over the ashes.

In a 1988 speech to the conservative Heritage Foundation, Gingrich declared that the assault on Wright was just the start of a “civil war” with liberals. “This war has to be fought with a scale and a duration and a savagery that is only true of civil wars,” Gingrich said, adding that “the hard left” consisted of people who “will try by chameleon-like actions to destroy our country.”

So, if you understand the lens through which Gingrich sees U.S. politics, it would not surprise you that Official Washington has ground to such a bitter halt. Gingrich does not view his political adversaries as honest, patriotic Americans who simply favor different policies. They are deceivers determined to “destroy our country.”

Similarly, Gingrich loves using wedge issues to divide Americans and pry loose votes, especially of disgruntled whites. So, he describes blacks living in poverty not as decent people struggling to make a living in a country that has a long, disgraceful record on race, but as a lower class of people with no work ethic and prone to crime.

In Iowa, Gingrich made this point, without explicitly defining the skin color though he could be sure that his white audience would add the shading in their minds. As part of his plan to get rid of “truly stupid” child-labor laws and put elementary school kids to work as janitors, he said:

This racially tinged message has been part of Gingrich’s world view since his academic days in 1971 when he devoted his PhD thesis to the arcane topic of “Belgian Education Policy in the Congo, 1945-1960,” which adopted what was then a favorite conservative theme of criticizing the ungrateful anti-colonialism of Africans (although Gingrich did acknowledge the exploitative nature of Belgian policies).

Gingrich called on Africans to understand “the good as well as the bad aspects of colonialism” and warned against “Black xenophobia,” although as New York Times columnist Maureen Dowd noted, “what’s xenophobic about Africans wanting their oppressors to go away? It’s like saying abused wives who want their husbands to leave are anti-men.”

Over the decades, Gingrich has retained this paternalistic attitude toward white imperialism in Africa. It surfaced in 2010 when right-wing author Dinesh D’Souza constructed an absurd argument that Obama was channeling his dead Kenyan father, whom D’Souza described as “this philandering, inebriated African socialist, who raged against the world for denying him the realization of his anticolonial ambitions.”

Gingrich praised D’Souza’s insight, adding that Obama’s “fundamentally out of touch” attitude toward Americans could only be explained “if you understand Kenyan, anticolonial behavior.” In a similar tone, Gingrich now denounces Obama as “the food-stamp president” to the cheers of the Republican “base.”

What’s different now, however,  is that Gingrich is treating the Republican presidential campaign and Mitt Romney much as he previously treated Congress under Jim Wright, something to be burned down if Gingrich can’t get his way — or if necessary for him to get his way. So, the former Massachusetts governor despite running as a conservative technocrat is really a despised “liberal” dispensing “pious baloney,” according to Gingrich.

Maureen Dowd wrote in a Dec. 4, 2011, column, that “Newt Gingrich’s mind is in love with itself. It has persuaded itself that it is brilliant when it is merely promiscuous. This is not a serious mind. Gingrich is not, to put it mildly, a systematic thinker. His mind is a jumble, an amateurish mess lacking impulse control. He plays air guitar with ideas, producing air ideas. He ejaculates concepts, notions and theories that are as inconsistent as his behavior.”

But that analysis perhaps makes too light of what Gingrich really represents. He is the destroyer of what true democracy requires, a healthy respect for your opponents and an acknowledgement that the vast majority of them are decent, honorable people, however much you may disagree with their political opinions.

That generosity toward others or even a readiness to acknowledge their common humanity is not permitted in Gingrich’s world. In that nasty place, hard-working researchers trying to discover cures for lethal and crippling diseases are simply those who would use science “to desensitive society over the killing of babies.”

7 comments for “The Ugly Words of Newt Gingrich”