Those who want true democracy favor a well-informed public, but those who simply want power understand that a smart electorate is a dangerous thing, so they seek out and destroy truth-tellers, as is now happening to a crusading judge in Spain, as Lawrence Davidson reports.

Among the numerous wars that are perennially being waged worldwide is the one between truth-tellers and those who would suppress the truth. I have alluded to this war in prior analyses that took up the plight of such truth-tellers as Bradley Manning and Julian Assange. 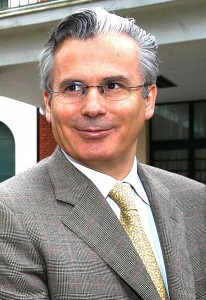 Of course, it is quite possible that most of the public, in the U.S. and elsewhere, doesn’t care about the truth either. However, Power is not taking any chances in this regard.

Recently, a new front in this continuing war has opened up. On Jan. 17, Al Jazeera reported that Spanish judge Baltasar Garzon had “gone on trial in the country’s supreme court on [three separate] charges of abusing judicial powers.”

Garzon is a very important truth-teller, who has conducted a number of investigations into violations of international law against torture. Using the principle of universal jurisdiction, Garzon went after Chilean dictator Augusto Pinochet back in 1998, and in March of 2009 he stated that Spain could bring charges against six Bush Jr. administration officials for clearing the way for the use of torture during the Iraq War.

At least four men, who are Spanish citizens and also former prisoners at the Guantanamo Bay prison, have accused the U.S. military of torturing them. It was at this point that the U.S. government appears to have placed Garzon in a category that would also include Manning and Assange: the category of the dangerous truth-teller.

The U.S. Ambassador to Spain in 2009, Eduardo Aguirre describes his actions (in a diplomatic cable made public by Wikileaks in 2010) in relation to Garzon’s investigation of the Bush administration’s torture policies as follows, “behind the scenes we have fought tooth and nail to make the charges disappear.”

The significant word here is “disappear” for there are two approaches to suppressing an unwanted truth. The first is to create a counter-story that makes the truth appear untrue. The second is to simply suppress all evidence, all references, all interest so that the particular truth just “disappears.”

Aguirre managed to get the cooperation of Spain’s Chief Prosecutor Javier Zaragoza who is quoted in another U.S. diplomatic cable (also made public by Wikileaks) to the effect that he had a plan to “embarrass” Garzon into dropping his case against the Bush officials by misrepresenting Garzon’s actions in previous cases. This sounds like a bit of blackmail.

Garzon did not relent and now he is on trial for “abusing judicial powers” in this and other cases.
Garzon and his supporters, which include almost every human rights group on the planet, claim that the charges are politically motivated and, to be sure, the entire affair appears similar to the questionable rape charge facing Assange in Sweden.

In the case of Garzon, the Spanish Public Prosecutor (different than the Chief Prosecutor) has recommended acquittal on all three charges and yet there is still serious doubt that this will happen. If Garzon is found guilty on any of the charges, he “could be banned from serving as a judge for 20 years, in what would be a career-ending blow to the 55-year-old,” Al Jazeera reported. This is precisely the outcome the U.S. government would like to see.

The good news is that this battle to silence Garzon, has not yet intimidated all other Spanish judges. On Jan. 20, another Spanish judge, Pablo Rafael Gutierrez, took up the case of the former Spanish citizens who allege torture at Guantanamo Bay. This judge, again used the principle of universal jurisdiction, and noted that the U.S. government has consistently refused to investigate the Spanish citizens’ charges.

James Goldston, the executive director of Open Society Justice Initiative, described the situation this way: “These crimes [such as torture] are universal crimes and it is very clear that until the United States holds to account those responsible for these crimes, other judicial actors in other countries are going to press for accountability.”

The most powerful and influential government in the world — the one with its capital in Washington, D.C. — is going to fight to halt these foreign efforts. And so, we have a war that seeks to replace the truth with either lies or historical black holes.

One of the major themes of George Orwell’s classic novel, 1984, is the controls of information. In book 1, chapter 3 of the novel we find this proposition if government can control all media and all public records it can either impose a lie as truth or simply make selected past events disappear from society’s collective memory.

It is really amazing just how common this sort of manipulation is. And, the reason it is relatively easy for governments to get away with it is because the average man and woman cares mainly about little truths and not big ones.

Little truths are local truths. Don’t be misled to think that little means unimportant because that is not the case. Little truths are the truths that make possible successful daily interactions and that, of course, makes them very important indeed.

Thus, one major reason life can go on relatively smoothly is that, most of the time, you can take as true what others tell you. That this is so means we can rely on friends, have stable relationships with spouses and children, and maintain successfully operating offices, business arrangements, etc. When the little truths start to become lies, these relationships break down.

Alleged big truths are the ones governments and the major media outlets tell the masses. When the U.S. government tells its citizens that unregulated capitalism will make the nation strong and prosperous, or that there must be a war to prevent Iraq from using weapons of mass destruction; when the major U.S. media outlets tell their viewers and readers that Iran is pursuing nuclear weapons or Israel is “just like us,” they are shaping perceptions that are not just local but regional and national.

The problem is that, historically, most alleged big truths turn out to be big lies. But by the time the citizenry realizes this, it is too late. Then it turns out that the citizens’ historical memories are short and they forget past big lies, which allows them to swallow new ones a generation later. And, finally, as long as the little truths work, most people either don’t notice or don’t care about the big lies.

Yet truth-tellers — like Manning, Assange and Garzon — have good historical memories and they do notice and do care. They realize that when big truths turn out to be big lies people suffer they suffer in the millions, bombs rain down from the skies, economies falter and the public sphere of life becomes like a poisoned well.

That is why accountability for the crimes hidden behind big lies is so important. That is why no government, no politician, no media organization should be allowed to manipulate the truth about the past or the present. On this the future depends.

Lawrence Davidson is a history professor at West Chester University in Pennsylvania. He is the author of Foreign Policy Inc.: Privatizing America’s National Interest; America’s Palestine: Popular and Offical Perceptions from Balfour to Israeli Statehood; and Islamic Fundamentalism

7 comments for “Spanish Front in War on Truth”