Showtime’s “House of Lies” with Don Cheadle dissects the corrupt world of corporate consulting at a time when the Republicans seem poised to nominate Mitt Romney, who made millions at Bain Capital by applying similar strategies for pumping up companies and inflating profits, as Danny Schechter observes.

If you go to the corner of 8th Avenue and 42nd Street near Times Square in Manhattan, just down from the Wax Museum and around the corner from the bus station, and look up, you’ll see an oversized billboard for Showtime’s, fast -paced “House of Lies,” a new cable TV series that is more like a realistic docudrama about the world of hard-charging management consultants.

Don Cheadle stars in this tightly written challenge to the popular “Mad Men” glorification of Madison Avenue in the 1950s, spiced with the insertion of pretty graphic hot sex that makes Janet Jackson’s Superbowl moment seem like it belonged on the Disney Channel. An actor on the series laughingly downplays the explicit physical grappling as “naughty.” 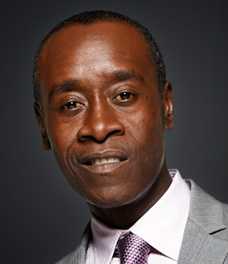 Don Cheadle in his starring role in “House of Lies”

At a time when Mitt Romney, a former management consultant himself in his years at Bain Capital, is running for president, this show offers insight into just how vulgar vulgar capitalism can be.

In one scene, the team headed by Cheadle who plays the superslick Marty Kaan (a.k.a. “King Kaan”) is pitching a bank president on how to win over the public by offering no interest loans and guarantees to keep customers in their homes.

When his prospective client rejects the idea, it is explained that very few of his customers will end up” qualifying” for the “benefit” which is designed as a phony image-enhancer to allow him and his cronies to take big bonuses without any criticism. When he understands that he can get richer by appearing socially responsible, he hires the team. It’s all a clever flim-flam, but sounds suspiciously like what most of the big banks did when peddling fraudulent loans.

The Internet Motion Picture Data Base calls the series, “a subversive, scathing look at a self-loathing management consultant from a top-tier firm. Marty, a highly successful, cutthroat consultant is never above using any means (or anyone) necessary to get his clients the information they want.”

Cheadle’s work in this series is very political even as it is promoted as only entertainment and comedy. Perhaps that is why cheeky reviewers in such high-level publications as Entertainment Weekly attack it by acknowledging that the issues it raises are appropriate but not the way they raise them.

Ken Tucker writes, “And at this time in history, who doesn’t want to see undeservingly wealthy people get fleeced, or at least brought low by their avarice? In practice, however, House of Lies becomes a zero-sum game: Creeps conning creeps, and the creeps we’re supposed to root for, Cheadle’s gang at Galweather & Stearn, led by their boss, The West Wing‘s Richard Schiff, don’t seem all that much more interesting than the clients they’re gouging.”

Au contraire. New York Magazine gets closer to the truth by writing:

“Marty and his clients portray the one percent at their very worst: ‘You look at the pilot and go, “Man, these guys helped these assholes be happier and keep doing their business,”’ says Cheadle. ‘But they give themselves the out that “we’re not the ones doing it. They’re doing it. We’re just helping them do it better.”’

“The timing, between Occupy Wall Street and the presidential election, couldn’t be better for a sendup of corporate amorality and the kind of M.B.A. capitalism Mitt Romney, at Bain & Co., helped perfect.”

Remember, Cheadle starred in “Hotel Rwanda” (2004), a film about the Rwandan genocide. He later was active in promoting awareness of genocide in the Darfur region of Sudan. The IMDCB reminds us that, “In January 2005, he traveled to Sudan with five members of Congress to see refugee camps and to meet survivors of the genocide. Upon his return, he reported on his trip for ‘ABC News Nightline.’”

Today the only films about Romney, the real-world “con(man)sultan(t)” are full-length attack ads like the one that New Gingrich’s super-PAC bought and broadcast before Gingrich apologized.

Increasingly, to get to the truth of any of this you have to watch TV entertainment or films, not news. Stephen Colbert can raise the critique about money in politics that he does because he is considered a comic, someone who “riffs” (to use a New York Times word). He’s not considered a serious commentator.

Unfortunately, in our culture, information has to be presented as entertainment to be taken seriously because information programming and news reporting is so predictable and formularized. The best new film on the financial crisis is “Margin Call.” Documentaries like the ones I have done on banksters can’t compete in this environment.

That’s one of the reasons the big Internet sites went after the new bill on online piracy, arguing it would make it harder to reference copywritten material in social criticism and free speech.

Of course, they also did it because they were being threatened with fines and jail time for carrying, or allowing others to download, music and movies that Hollywood producers and the Music Biz want to control to keep their profits high. They are the real pirates in this piracy debate.

The lesson in the one-day so-called “internet strike” led by Wikipedia, Google et.al is that when usually competitive companies collaborate they have a lot of power.

The Left blogosphere could learn this lesson. While the right-wing punditocracy tend to share and reinforce the same message, radicals love to fight with each other in pursuit of the “correct line” and often dissipate their impact by magnifying small differences to prove some often-insignificant point.

I had that experience with some organizations I approached to work with Globalvision in creating the collaborative not-for-profit Mediachannel.org network to try to help build a media and democracy movement.

They insisted on not working together or cross-promoting each other’s work because it would, they feared, diminish their vanguard role. In their own way they were as single-mindedly competitive as any avaricious capitalist firm. Some said, “we will hurt ourselves if we help you,” retreating into what became a self-serving parochial cottage industry that was not growing.

In one sense, they projected the values that were the bain of the Bain “solution.” Today, Mediachannel is back as Mediachannel1.org, in an alliance with Rob Kall’s Op-ed News, hoping to reclaim its cutting-edge role in dissecting media as a window into what’s wrong with our system and what we can do about it.

Join us as members or affiliates. Working together helps make the difference in the house of lies we live in.