The Standard & Poor’s rating agency has downgraded European countries in a move that may force the governments to crack down more on their populations and divert more money to wealthy investors, thus helping the super-rich short-circuit what’s left of democracy, Danny Schechter reports.

We Americans live in an increasingly degraded country. Our politics are degraded and have become a laughingstock to the word. Our military is demoralized and degraded with soldiers urinating on dead civilians and awaiting deployment orders for the next illegal intervention.

Our education system has been degraded with standards falling and pervasive defunding. Our transportation system, ditto. I could go on, but I don’t have to. We are all living the decline with downward mobility, jobless and foreclosures, to cite a few trends that make life so miserable for so many. 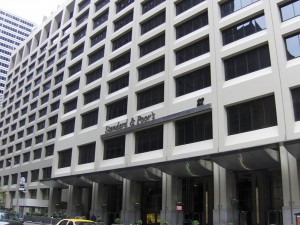 Now, our godlike financial ratings agencies have decided to degrade nine countries struggling to fix their financial crisis. The decision by Standard and Poor’s (Best renamed, “It is now Standard to Be Poor”) to downgrade credit ratings for France, Italy, Austria and six other European countries signals those nations that Wall Street has them by the cojones. Their costs for borrowing will go up.

These countries are being warned: We are in charge. Do as we say!

Unreported in all of this, is that many of the companies that loaned them the money are part of a U.S.- led financial oligarchy. The credit agencies the same ones that legitimated fraudulent sub-prime lenders with no accountability are part of the enforcement gang of today’s loan sharks who are squeezing Europe to pay up or else.

It’s been reported that when Greece finally gets a huge new loan from the European Central Bank and the IMF, most of the money will only touch down in Athens before being wired directly to London-based hedge funds that pushed the debt out in the first place. They now demand to be repaid first. The hell with Greece’s needs.

As The Financial Times reported, “The eurozone debt crisis returned with a vengeance on Friday as Standard & Poor’s downgraded France and Austria, two of the currency’s six triple A creditors, as well as other nations not in the top tier.”

S&P’s goal was not just about economics. It was political, to press Europe’s political leaders to move faster to please them, i.e., suspend democratic checks and balances if needs be, and do what Wall Street wants ASAP! It was an act of bullying. It was also punitive because, according to Bloomberg, Europe was actually making progress in getting its house in order:

“S&P acted at the end of a week in which signs grew that Europe’s woes may be cresting as borrowing costs fell, evidence of economic resilience emerged and the European Central Bank said it had quelled a credit crunch at banks.

“The result is that refinancing costs for certain countries may remain ‘elevated’ and credit availability and economic growth may fade, it said. ‘It’s not a catastrophe,’ French Finance Minister Francois Baroin told France 2 television, noting his country now has the same rating as the U.S.”

How reassuring. The U.S. is getting the same treatment. The problem is that the more the .001 percent financiers push, the more their borrowers may be forced to push back,

Bloomberg’s report ends with a quote about “dangers” that the article glosses over: “This decision could upset the positive developments we’ve seen in Europe in the last few weeks,” ECB Governing Council member Ewald Nowotny said. “That’s the most dangerous thing in my view.”

In short, we are all in the same crunch, being pushed around by the same avaricious interests. Call it what it is: a system of financial terrorism.

Europe is not simply a passive victim here its elites have been collusive and complicit with the lenders, taking massive loans and often squandering the money. Satyajit Das, a brilliant author and derivatives expert, writes on NakedCapitalism.com, “ Europe is on a road to fiscal bondage.”

“The proposed plan is fundamentally flawed. It made no attempt to tackle the real issues the level of debt, how to reduce it, how to meet funding requirements or how to restore growth. Most importantly there were no new funds committed to the exercise.

“The centerpiece of the new plan was a commitment to a new legally enforceable ‘fiscal compact’ requiring government budgets to be balanced or in surplus, with the annual structural deficit not to exceed 0.5% of nominal Gross Domestic Product (GDP). The language was Orwellian and incomprehensible in equal measure.”

While some get the stick, others enjoy the carrots. Matt Taibbi reports:

“Newspapers in Colorado today are reporting that the elegant Hotel Jerome in Aspen, Colorado, will be closed to the public from today through Monday at noon. Why? Because a local squire has apparently decided to rent out all 94 rooms of the hotel for three-plus days for his daughter’s Bat Mitzvah.

The hotel’s general manager, Tony DiLucia, would say only that the party was being thrown by a ‘nice family,’ but newspapers are now reporting that the Daddy of the lucky little gal is one Jeffrey Verschleiser, currently an executive with Goldman, Sachs.”

He was also an executive at the now departed Bear Stearns, This particular “nice” padre was part of a double-dipping scheme exposed in The Atlantic:

“The traders were essentially double-dipping — getting paid twice on the deal. How was this possible? Once the security was sold, they didn’t have a legal claim to get cash back from the bad loans — that claim belonged to bond investors — but they did so anyway and kept the money.

“Thus, Bear was cheating the investors they promised to have sold a safe product out of their cash. According to former Bear Stearns and EMC traders and analysts who spoke with The Atlantic, Nierenberg and Verschleiser were the decision-makers for the double dipping scheme.”

Scratch beneath the surface and all the old players and financial gangsters come into view in an internationally interconnected and manipulated system. Unless something is done by those outside the system a more powerful global Occupy Movement for starters we will all be on what Satyajit Das calls “The Road To Nowhere.”

News Dissector Danny Schechter covers financial crime in his News Dissector blog His new book is “OCCUPY:” Dissecting Occupy Wall Street. His most recent film is Plunder that looks at the financial crisis as a crime story. Comments to dissector@mediachanel.org