Republicans are fond of throwing the charge “class warfare” at anyone who seeks to reverse the rapid division of modern society into haves and have-nots. But the ancient story of Cain and Abel is a cautionary tale about the violence that class stratification inevitably brings, writes Rev. Howard Bess.

In America, there is a widening gap between the rich and the poor. The economic and social gap between employers and employees keeps widening. A similar chasm has opened between those whom we elect and the electorate. Extreme poverty and exorbitant wealth along with imbalances of power are stratifying our society.

Which leads us to one of the Bible’s most important stories about the dangers from class stratification, the violent death of Abel at the hands of his brother Cain. Though often misunderstood, the story and Cain’s question to God, “Am I my brother’s keeper?” form a central moral tenet of Judaism, Christianity and Islam. 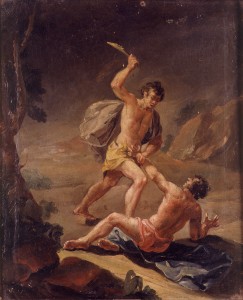 To understand the context of the Cain and Abel message, one must go back to the special story of Jews, which — according to the Bible — begins when God spoke to a man named Abram who lived in what is today Iraq.  God told Abram that he was to be the founder of a special people.

The Bible says that Abram left his home and went out not knowing where he was to go.  He acquired a new name, Abraham, and he and his clan became nomadic herders.  Abraham’s descendants through an extended series of events ended up in Egypt as slaves.

Over time, led by Moses, the Abraham clan rebelled and escaped Egypt.  Once again they became a nomadic clan of herders. In the process they became a warrior clan with a mission to take over Palestine, a fertile land northeast of Egypt. In the name of their God, they killed and conquered other clans that got in their way.

Eventually this warrior tribe controlled all of Palestine. The nation of Israel was established, with King David making Jerusalem the capital. The first Jerusalem temple was built under King Solomon, and Israel developed an extensive religious system.

The priests who controlled and operated the temple were the first group in Israelite history to become literate. They became the first writers of the stories which had been passed down as oral history for centuries. The priests collected the stories and put them in written form. But they told the stories not as actual history but to explain history.

By this point, Israel had acquired its territory through conquest, but now had a different problem: How were the Israelites to live together? Before the Israelites took ownership of Palestine, they were not farmers; they were herders who lived off the land. However, once the conquest was complete, some Israelites became farmers, while others remained herders.

In ancient societies like that of the developing Israelites, farmers rose into a higher social class than herders. In this context of Israel’s social evolution, a priest or a group of priests chose to put an old story into written form, the story of two brothers, Cain and Abel.

Tensions arose between the two brothers because of their choice of occupations. Cain chose to be a farmer. Abel chose to be a herder. So, Cain became a member of the social elite, but that did not win him favor with God.

In the story, Abel brought his finest lamb as an offering to God, who was pleased. Cain brought an offering of grain from his farm, but God rejected the grain offering. Cain was outraged that God had shown preference to his lower-class brother. So a furious Cain killed Abel. It was a homicide based on social class.

Then, along came God who asked Cain the whereabouts of his brother, Abel. Cain responded, “I do not know. Am I my brother’s keeper?”

In the mind of Cain, his question was legitimate. As a member of an elite class, could he not set the rules? However, God had a different perspective. God sentenced Cain to the lowest possible class, a landless wanderer dispatched to the land of Nod. Cain protested, “This is a punishment I cannot bear!” But it was too late. The sentence was put in force.

But the current relevance of the story is that the violent death of Abel came out of class conflict and similar violence is the inevitable outcome as long as society is stratified by wealth and power, rather than unified by an ethos of caring for one another.

In modern times, the dynamic of the Cain and Abel story has gone global. The United States and other powerful nations have become the Cain in the story and the Third World has become the Abel. Americans are obsessed with being number one in most everything. However, we will never be a truly great nation through wealth and power. Greatness will be found in the embrace of a brother and the love of a neighbor.

Being my brother’s keeper and loving my neighbor may have formed the essential backbone of the moral and ethical mandate for Jew, Christian and Muslim. However, there is not much evidence that any of us is doing a very good job.

← What Your Support Meant in 2011
Triangulations of Christopher Hitchens →