America’s still-influential neocons are pounding President Obama for failing to negotiate a longer U.S. military occupation of Iraq, blaming him for the country’s latest political crisis. But the Independent Institute’s Ivan Eland says the U.S. pullback was part of a necessary reordering of U.S. priorities.

Like a mother forcing her children to take bad-tasting medicine for their own good, disgruntled American “allies” have recently compelled the financially ailing U.S. superpower to scale back meddling abroad that it can no longer afford.

The United States, always reluctant to remove troops from any overseas location, even if the situation on the ground there has changed greatly, wanted to renegotiate the U.S.-Iraqi agreement for a complete American troop withdrawal from Iraq by the end of 2011. 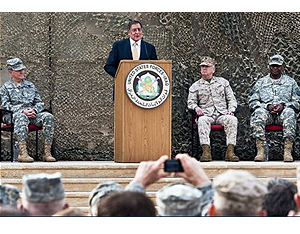 The U.S., however, wanted its troops to have immunity from Iraq’s laws, something the occupation-weary Iraqis would not stand for in the wake of the Haditha and Blackwater massacres of Iraqi civilians by U.S. troops and security contractors, respectively.

Many conservatives have criticized the Obama administration for abandoning Iraq, and they cite the recent spike in violence, the attempt by the Shi’ite prime minister to arrest the Sunni vice president, and the crumbling of the prime minister’s Shi’ite coalition as evidence that U.S. troops should have remained in the country.

Yet this same argument was made by conservatives as U.S. forces withdrew from Vietnam after decades of meddling and is made to this day about having abandoned that Southeast Asian country too soon. And like the South Vietnamese government, the Iraqi government may fall apart in what is essentially a civil war.

Yet how long should the United States keep its finger in the dike in such developing countries, especially when it is almost impossible to remodel foreign political cultures using armed force? In Iraq, the United States now has to rely on the largest embassy in the world, 16,000 embassy employees and contractors, to hold the country together. Good luck.

Because Iraq is an artificial country with rival ethno-sectarian groups and tribes competing in a political culture that rarely allows compromise, Iraq probably would be doomed to significant civil strife whenever American troops departed. It might as well be now, after almost nine years of failed nation-building.

In Pakistan, a similar situation is playing out. Anti-American sentiment is at a fever pitch after a CIA security contractor killed two Pakistanis in January, a U.S. helicopter-borne raid killed Osama bin Laden in May, and an American airstrike killed 26 Pakistani military personnel near the Afghan border in November.

As a result, Pakistan will likely scale back its broad security relationship with the United States. “We’ve closed the chapter on the post-9/11 period,” according to one senior U.S. official quoted in The New York Times. Good.

In a bizarre twist of policy, since 9/11, the United States has been shoveling billions in military and economic assistance to Pakistan so that the Pakistanis can aid the Afghan Taliban, which the U.S. is fighting. After all, money is fungible.

In return for the massive aid to Pakistan, the U.S. has been allowed to use drones to kill al-Qaeda members in Pakistan and transmit supplies and military equipment through Pakistan to fight the Pakistani-supported Afghan Taliban. Aiding the primary benefactor of your enemy is crazy!

After the American airstrike killed Pakistani soldiers last month, Pakistan made the U.S. close a drone base in southwestern Pakistan and closed supply routes for American war materiel going into Afghanistan. All CIA drone attacks have been suspended since November.

Although Pakistan is reevaluating security cooperation between the two countries, it seems like the excessive American party is over.

Reflecting enraged Pakistani public opinion, the broader security relationship will probably be scaled back to a narrower counterterrorism relationship that more tightly restricts drone strikes against al-Qaeda on Pakistani soil, limits the number of U.S. spies and troops on the ground there, and raises the cost by millions of dollars to get American supplies through to Afghanistan.

But as in Iraq, the reduced U.S. footprint may seem like bad news but is actually something to celebrate. Even if we subscribe to the dubious proposition that the U.S. can kill its way out of the al-Qaeda problem, the United States will still be able to continue to hunt al-Qaeda with drones but will save billions of dollars by continuing to freeze massive military aid to Pakistan.

Moreover, a lighter U.S. presence in Islamic countries would actually reduce the ire of radical Muslims against the United States, thus draining the swamp of potential anti-U.S. terrorists. It is a shame that it takes Islamic nations themselves to compel oblivious U.S. policy makers to reduce the underlying cause of anti-U.S. terrorism.

2 comments for “The Bad-Tasting Medicine of Retreat”