From the Archive: Congress keeps expanding government powers in the “war on terror” even when President Obama doesn’t ask for them, unlike President George W. Bush who proudly signed the Military Commissions Act, a precursor to the indefinite detention in today’s National Defense Authorization Act, as described by Robert Parry in 2006.

History should record October 17, 2006, as the reverse of July 4, 1776. From the noble American ideal of each human being possessing  “unalienable rights” as declared by the Founders 230 years ago amid the ringing of bells in Philadelphia, the United States effectively rescinded that concept on a dreary fall day in Washington.

At a crimped ceremony in the East Room of the White House, President George W. Bush signed the Military Commissions Act of 2006while sitting behind a sign reading “Protecting America.” 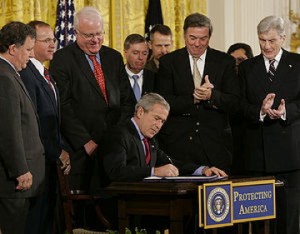 On the surface, the law sets standards for harsh interrogations, prosecutions and executions of supposed terrorists and other “unlawful combatants,” including al-Qaeda members who allegedly conspired to murder nearly 3,000 people on Sept. 11, 2001.

“It is a rare occasion when a President can sign a bill he knows will save American lives,” Bush said. “I have that privilege this morning.”

But the new law does much more. In effect, it creates a parallel “star chamber” system of criminal justice for anyone, including an American citizen, who is suspected of engaging in, contributing to or acting in support of violent acts directed against the U.S. government or its allies anywhere on earth.

The law strips “unlawful combatants” and their alleged fellow-travelers of the fundamental right of habeas corpus, meaning that they can’t challenge their imprisonment in civilian courts, at least not until after they are brought before a military tribunal, tried under special secrecy rules and then sentenced.

One of the catches, however, is that with habeas corpus suspended these suspects have no guarantee of a swift trial and can theoretically be jailed indefinitely at the President’s discretion. Given the endless nature of the “global war on terror,” suspects could disappear forever into the dark hole of unlimited executive authority, their fate hidden even from their families.

While incarcerated, the “unlawful combatants” and their cohorts can be subjected to coercive interrogations with their words used against them if and when they are brought to trial as long as a military judge approves.

The military tribunals also could use secret evidence to prosecute a wide range of “disloyal” American citizens as well as “anti-American” non-citizens. The procedures are similar to “star chambers,” which have been employed historically by absolute monarchs and totalitarian states.

Even after the prosecutions are completed, the President could keep details secret. While an annual report must be made to Congress about the military tribunals, the President can conceal whatever information he chooses in a classified annex.

When Congress was debating the military tribunal law in September 2006, some Americans were reassured to hear that the law would apply only to non-U.S. citizens, such as legal resident aliens and foreigners. Indeed, the law does specify that “illegal enemy combatants” must be aliens who allegedly have attacked U.S. targets or those of U.S. military allies.

But the law goes much further when it addresses what can happen to people alleged to have given aid and comfort to America’s enemies. According to the law’s language, even American citizens who are accused of helping terrorists can be shunted into the military tribunal system where they could languish indefinitely without constitutional protections.

“Any person is punishable as a principal under this chapter who commits an offense punishable by this chapter, or aids, abets, counsels, commands, or procures its commission,” the law states.

“Any person subject to this chapter who, in breach of an allegiance or duty to the United States, knowingly and intentionally aids an enemy of the United States … shall be punished as a military commission may direct.

“Any person subject to this chapter who with intent or reason to believe that it is to be used to the injury of the United States or to the advantage of a foreign power, collects or attempts to collect information by clandestine means or while acting under false pretenses, for the purpose of conveying such information to an enemy of the United States, or one of the co-belligerents of the enemy, shall be punished by death or such other punishment as a military commission may direct.

In other words, a wide variety of alleged crimes, including some specifically targeted at citizens with “an allegiance or duty to the United States,” would be transferred from civilian courts to military tribunals, where habeas corpus and other constitutional rights would not apply.

Secrecy, not the principle of openness, dominates these curious trials.

Under the military tribunal law, a judge “may close to the public all or a portion of the proceedings” if he deems that the evidence must be kept secret for national security reasons. Those concerns can be conveyed to the judge through ex parte or one-sided communications from the prosecutor or a government representative.

The judge also can exclude the accused from the trial if there are safety concerns or if the defendant is disruptive. Plus, the judge can admit evidence obtained through coercion if he determines it “possesses sufficient probative value” and “the interests of justice would best be served by admission of the statement into evidence.”

The law permits, too, the introduction of secret evidence “while protecting from disclosure the sources, methods, or activities by which the United States acquired the evidence if the military judge finds that … the evidence is reliable.”

During trial, the prosecutor would have the additional right to assert a “national security privilege” that could stop “the examination of any witness,” presumably by the defense if the questioning touched on any sensitive matter.

The prosecution also would retain the right to appeal any adverse ruling by the military judge to the U.S. Court of Appeals in the District of Columbia. For the defense, however, the law states that “no court, justice, or judge shall have jurisdiction to hear or consider any claim or cause of action whatsoever relating to the prosecution, trial, or judgment of a military commission under this chapter, including challenges to the lawfulness of procedures of military commissions.”

In effect, that provision amounts to a broad amnesty for all U.S. officials, including President Bush and other senior executives who may have authorized torture, murder or other violations of human rights.

Beyond that amnesty provision, the law grants President Bush the authority “to interpret the meaning and the application of the Geneva Conventions.”

[Some provisions of the 2006 law were modified in 2009 to grant additional safeguards for the accused. However, the newly approved National Defense Authorization Act of 2012 again broadens the government’s powers to detain indefinitely alleged “terrorists” and those accused of aiding them, including Americans arrested on U.S. soil.

[Sen. Lindsey Graham, R-South Carolina, a bill co-sponsor, made clear that Americans would not be spared possible detention. “The statement of authority to detain, does apply to American citizens and it designates the world as a battlefield including the homeland,” Graham said.]

In signing the Military Commissions Act of 2006, Bush remarked that “one of the terrorists believed to have planned the 9/11 attacks said he hoped the attacks would be the beginning of the end of America.” Pausing for dramatic effect, Bush added, “He didn’t get his wish.”

Or, perhaps, the terrorist did.

3 comments for “Shame on Us All”