Exclusive: The cables and videos allegedly leaked by Pvt. Bradley Manning offer the American people gritty “ground truth” about what the U.S. government has done in their names, such as the slaughter in Iraq, but the information also sheds light on a possible future war with Iran, reports Robert Parry.

One criticism about the value of the information that Pvt. Bradley Manning allegedly gave to WikiLeaks is that most of it was known in some form and thus didn’t justify the risks to sources who might be identified from the diplomatic and military cables. However, that complaint misses the importance of detailed “ground truth” in assessing issues of war and peace.

For instance, the prospects of war with Iran escalated last month because of a toughly worded report by the United Nations’ International Atomic Energy Agency, which compiled some old and new evidence to argue that Iran continues to make progress toward a nuclear bomb. Immediately, the U.S. news media accepted the IAEA’s report as the unquestioned truth and as further repudiation of the 2007 U.S. intelligence estimate that Iran had ceased work on a nuclear weapon in 2003.

One might note the irony in this flip on Iran. In the run-up to war with Iraq, the U.S. media embraced CIA reports of secret Iraqi WMD programs while mocking the IAEA’s doubts. Regarding Iran, the CIA and IAEA have traded places, with U.S. intelligence analysts chagrined over swallowing the bogus Iraq-WMD evidence being more skeptical of the Iran-nuke allegations, while the IAEA has taken the role as chief WMD exaggerator. 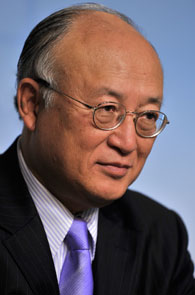 So, it was useful to examine the WikiLeaks documents regarding the election of the new IAEA leader in 2009 to understand why this flip may have occurred. What those classified State Department cables show is that the IAEA’s new director general, Japanese diplomat Yukiya Amano, credited his victory largely to U.S. government support and promptly stuck his hand out for U.S. money.

Further, Amano left little doubt that he would side with the United States in its confrontation with Iran and that he would even meet secretly with Israeli officials regarding their purported evidence on Iran’s nuclear program, despite the fact that Israel is arguably the world’s preeminent rogue nuclear state and rejects IAEA inspections of its own nuclear sites.

According to U.S. embassy cables from Vienna, Austria, the site of IAEA’s headquarters, American diplomats in 2009 were cheering the prospect that Amano would advance U.S. interests in ways that outgoing IAEA Director General Mohamed ElBaradei wouldn’t.

The appreciative Amano informed Pyatt that as IAEA director general, he would take a different “approach on Iran from that of ElBaradei” and he “saw his primary role as implementing safeguards and UNSC [United Nations Security Council]/Board resolutions,” i.e. U.S.-driven sanctions and demands against Iran.

Amano also discussed how to restructure the senior ranks of the IAEA, including elimination of one top official and the retention of another. “We wholly agree with Amano’s assessment of these two advisors and see these decisions as positive first signs,” Pyatt commented.

In return, Pyatt made clear that Amano could expect strong U.S. financial support, stating that “the United States would do everything possible to support his successful tenure as Director General and, to that end, anticipated that continued U.S. voluntary contributions to the IAEA would be forthcoming. Amano offered that a ‘reasonable increase’ in the regular budget would be helpful.”

Pyatt learned, too, that Amano had consulted with Israeli Ambassador Israel Michaeli “immediately after his appointment” and that Michaeli “was fully confident of the priority Amano accords verification issues.”

Michaeli added that he discounted some of Amano’s public remarks about there being “no evidence of Iran pursuing a nuclear weapons capability” as just words that Amano felt he had to say “to persuade those who did not support him about his ‘impartiality.’”

In private, Amano agreed to “consultations” with the head of the Israeli Atomic Energy Commission, Pyatt reported. (It is ironic indeed that Amano would have secret contacts with Israeli officials about Iran’s alleged nuclear weapons program, which has yet to yield a single bomb, when Israel possesses a large and undeclared nuclear arsenal.)

In a subsequent cable dated Oct. 16, 2009, the U.S. mission in Vienna said Amano “took pains to emphasize his support for U.S. strategic objectives for the Agency. Amano reminded ambassador [Glyn Davies] on several occasions that he was solidly in the U.S. court on every key strategic decision, from high-level personnel appointments to the handling of Iran’s alleged nuclear weapons program.

“More candidly, Amano noted the importance of maintaining a certain ‘constructive ambiguity’ about his plans, at least until he took over for DG ElBaradei in December” 2009.

In other words, the emerging picture of Amano is of a bureaucrat eager to bend in directions favored by the United States and Israel, especially regarding Iran’s nuclear program. Amano’s behavior surely contrasts with how the more independent-minded ElBaradei resisted some of Bush’s key claims about Iraq’s supposed nuclear weapons program, denouncing some documents as forgeries.

Today, with some Republican presidential contenders falling over themselves to bond with Israel over its desire to attack Iran, this sort of detail puts the IAEA report into a fuller context that can help American voters judge whether another war is necessary or whether they’re being misled again by hyped allegations.

These cables, which Manning allegedly gave to WikiLeaks, were first  spotlighted by the Guardian newspaper in the U.K. in 2010. However, because the full cables were posted on the Internet, I could dig through them to find additional details, such as Amano asking for more U.S. money.

Without this level of “ground truth,” Americans would be at the mercy of the major U.S. news media, which seems as much on board for a war with Iran as it was for war with Iraq. [For more on this topic, see Consortiumnews.com’s “DÃ©jÃ  vu Over Iran Nuke Charges” and “Big Media’s Double Standards on Iran.”]

Another example of how the material allegedly leaked by Manning helped educate the American people was the infamous gun-barrel video of U.S. attack helicopters mowing down seemingly defenseless Iraqi men, including two Reuters journalists, as they walked down a Baghdad street.

Not only did a U.S. military helicopter gunship slaughter the men amid macho jokes and chuckling apparently after mistaking a couple of cameras for weapons but the American attackers then blew away several Iraqis who arrived in a van and tried to take one of the wounded newsmen to a hospital. Two children in the van were badly wounded.

“Well, it’s their fault for bringing their kids into a battle,” one American remarked.

The videotaped incident entitled “Collateral Murder” by Wikileaks occurred on July 12, 2007, in the midst of President George W. Bush’s much-heralded troop “surge,” which the U.S. news media has widely credited for reducing violence in Iraq and bringing something close to victory for the United States.

But the U.S. press corps rarely mentions that the “surge” represented one of the bloodiest periods of the war. Beyond the horrific and untallied death toll of Iraqis, about 1,000 U.S. soldiers died during Bush’s “surge” of an additional 30,000 troops into Iraq.

It’s also unclear that the “surge” deserves much if any credit for the gradual decline in Iraqi violence, which had already reached turning points in 2006 before the “surge” with the death of al-Qaeda leader Musab al-Zarqawi, the U.S.-funded Sunni Awakening against al-Qaeda in Iraq, and the de facto ethnic cleansing of Iraqi cities with Sunnis and Shiites moving into separate neighborhoods.

Further putting the sectarian killing on a downward path was the Iran-brokered agreement with militant Shiite leader Moktada al-Sadr to have his militia stand down in exchange for an Iraqi government commitment to insist on a firm timetable for total U.S. military withdrawal, a process that has just been completed.

However, the U.S. news media continues to repeat the conventional wisdom about how U.S. troops protected Iraqis from violence through the “successful surge.” The “Collateral Murder” video puts the lie to that smug consensus, showing the “ground truth” of how the “surge” and indeed the entire Iraq War truly operated.

Many Americans may want to put the unpleasant memories of the Iraq War behind them from “shock and awe” and the illegal invasion, to the leveling of Fallujah and the Abu Ghraib atrocities, to the incompetent U.S. occupation, the Haditha murders and the sectarian slaughters but a failure to face the reality honestly will only encourage future war crimes of similar or even greater magnitude.

Already, Republicans such as Newt Gingrich, Rick Perry, Michele Bachmann and Mitt Romney are speaking as casually about going to war with Iran as George W. Bush and Dick Cheney did about war with Iraq.

As Bradley Manning wrote as he struggled over his decision to leak evidence of war crimes and other machinations by the U.S. government, “God knows what happens now.  Hopefully worldwide discussion, debates, and reforms.  I want people to see the truth because without information, you cannot make informed decisions as a public.”

The 24-year-old Manning now faces the prospect of a court martial that could put him in prison for the rest of his life. But his gift to America may be that he provided the nation the “ground truth” that could give meaning to debates about past and possibly future wars.