Police cleared out the last major Occupy encampment in the San Francisco Bay area on Thursday with the removal of tents at a park in Berkeley and the roughing-up of some protesters. Dennis J. Bernstein interviewed a U.S. Army veteran who provided security at the camp.

Berkeley Police gave Occupy Berkeley a troubling Christmas present in the form of a violent attack on and destruction of their encampment, located in Downtown Berkeley, across from City Hall, between the Berkeley High School and the Veterans Hall, in Martin Luther King Park.

I spoke with an member of the camp’s informal security detail, an Iraq vet, Corporal Nick Anthony Shaw, who had just been roughed up by the Berkeley Police, as they destroyed, and violently trashed Occupy Berkeley on Thursday. The cops threatened to arrest me and him, trying to disrupt the interview, and then turned the city sprinklers on us.

At least half the Berkeley encampment is homeless. A nice Merry Christmas for them! 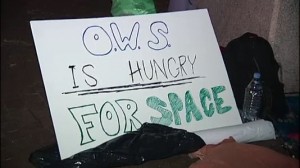 DB: We just got back from Martin Luther King Park in downtown Berkeley, right across from the High School, the Veterans Administration, Veterans Hall, City Hall and the police were there shredding and destroying; they were putting the sprinklers on even as we began this interview. We did catch up with one of the defenders of the camp who also happens to be a veteran.

NAS: I’m former Corporal Nick Anthony Shaw, United States Army, I served from ’99 to 2003. I’m now a peacekeeper with Occupy S.F. and Berkeley, I suppose, now that S.F. is closed.  Well, the encampment is just temporarily moved other than what the police threw away and ran over. They gave us a ten o’clock time to be out, the protesters stayed. So they proceeded to enter the back of the park here with two squad cars and a white truck where they ran over three tents, pulling in and didn’t even bother to check if anybody was in there. Thank God, nobody got injured.

They threw three tents and a bunch of peoples’ personal belongings in the back of a truck and then when the protesters tried to stop them they sped off about eighty miles an hour down the road, hitting one protester with the truck and hitting another protester with the car door. Then they proceeded to drive the truck over to the police station where, God only knows why, they started throwing peoples’ things in a dumpster right in front of them.

The protesters went over, climbed over the side of the truck and started pulling their things out. That’s when the police came out and began, well the first one was a woman. When the police came running out of the station everybody backed up. They came over  and the one foreign-looking police officer which I can identify by face but not name proceeds to knock over a woman and hit her with his billy club.

And then they formed a line where several officers ran up into the crowd knocking people over, two women were seriously injured. About seven people were hit with billy clubs. I was personally hit in the elbow with a billy club and all I was doing was talking on a megaphone. So it was extremely violent. I know at least three officers who need to lose their job. And then they….

DB: Do you have their badge numbers?

NAS: We have them on live video. And then what they did was they came in today, and a lot of the people ran in fear, and a lot of peoples’ stuff was here, but if anybody wasn’t here to claim it they threw it in the garbage truck, and threw everything away. So we got a bunch of people still over here about thirty-five to forty on the sidewalk with all of their things who are afraid the police are going to take them.

Well, as you can see about seven or eight of us have already started putting our tents back up. We’re not going anywhere; we are not illegally lodging, this is a protest. We have a right to occupy the Earth and no government has a right to put a time limit on a public place. And I just think it’s ludicrous.

DB: You were in the military?

DAS: They have definitely militarized the police. I’ve read paperwork that the Department of Homeland Security actually beefed up eighteen cities and trained them how to squash the Occupy movement. As far as I know that’s against the Constitution, to militarize the police, but they have done it. And they are out here, in full riot gear beating unarmed non-violent protesters.

DB: And, of course, we’ve already seen them shoot and critically wound Scott Olsen, a veteran of the Iraq war. You said you got a warning at ten o’clock last night, is that correct?

DB: And why, any sense of why you were cleared out? Did they say it was a danger to public safety? Anything like that?

DAS: They gave no reason whatsoever. I’ve actually got the eviction notice; the only thing that it says is that the park will be closed from 10 p.m. until 6 a.m. Anyone left will be considered as an illegal lodger and their belongings will be seized and they will be arrested.

DB: So these tents up here are in jeopardy starting at ten o’clock given what you have already learned from the police.

DAS: Yes, as far as what the police say, as of ten p.m. tonight they’re going to seize all of our personal property and arrest us for illegal lodging.

DAS: Yes, we had one gentleman who had his elbow dislocated. One woman who badly tore up both of her knees and her hands being knocked to the ground, and there’s at least four others who have abrasions and bruises from being hit with billy clubs.

DB: And for you, former serviceman, what’s at the core of this? Why are you out here defending, in San Francisco, standing here, obviously ready to take it on again. What’s pushing this?

DAS: Well, for me personally, my fiance died September 4th last year. I lost my home because we were a two-income family. All the money that they gave to the banks could have paid off every mortgage in America. And now instead of that they foreclosed on millions of Americans. And there are more empty homes than homeless people.

We have an inherent right to be here. If they don’t want to give us somewhere to stay then we’re going to take back what’s ours. I mean, squirrels don’t pay rent in a tree and a bear doesn’t have to pay rent in the woods. Why do we have to pay to live somewhere that will never belong to us? And if we have to do that, why do you need to have a penny in your pocket to have somewhere to stay? And since when is it illegal to be homeless? I don’t understand that.

DB: In the bigger picture, you see this as a class war?

DAS: Oh, yes. They are definitely trying to segregate the classes. I mean a perfect example, the city of San Francisco the minimum wage is $9.96. For $9.96 you can’t afford the smallest studio apartment in that city. So that means even if you work a forty-hour week job you can’t afford to live in that city. That’s class segregation and that’s forced public transportation. You have to move to Oakland or share a no bedroom house with renters. I mean, how do you do that?
If minimum wage doesn’t afford you minimal housing in the city you live in, there’s gotta be a problem, and I didn’t fight for that.

DB: There seems to be a fear, particularly on the part of the authorities, when there is a unity between those people who are already homeless and perhaps those people who are afraid that soon they will be joining them. That the unity between those who may still have jobs but are afraid they won’t soon. Do you see that as something that really sends shivers, gives problems to the powers that be?

DAS: Yes, of course. They are scared. They know that if we all unite we’re stronger than them. There’s nothing they can do about it. And there’s nothing that can stop the 99 percent. I mean the power of the people can change the world. I personally quit a $15 per hour job to be a full-time peacekeeper for Occupy S.F. Not everybody out here is homeless just because of a reason. I mean I could easily go and share with three roommates a place in San Francisco, but why?

I have a right to occupy this earth, we all do. So if they don’t want to help us, then give us somewhere where all the people can go, the common people, the poor people. Then we’re going to take back city park, if they don’t want to give us that, we’ll take the state park, we’ll take the federal park. We’ll take every street in the country, in the world.  Egypt’s already winning, there’s no reason why we can’t, too.

DB: Finally, it’s ironic I’m looking right across at the Veterans Building, we’re across the street from City Hall, we’ve got Berkeley High School right behind us, we’ve got the police pushing us back, we’re not even in the park and the police are pushing us back because, obviously, they are afraid of a microphone too. But as I was saying, Berkeley High School, the Veterans Administration, City Hall, the court over there, it’s pretty ironic. You want to tell us as a vet what that sorta means to you, that image.

DAS: Well, I look around me at all these buildings designed to help people, and I don’t know who they are protecting anymore. To be honest with you, I am surrounded by police on a daily basis and I live in fear of them, not anyone here. I don’t understand why the politicians are wanting to force us out of a park that clearly belong to the public. I mean, what are we doing so bad? We are sitting here protesting, no one is lodging. I mean, there might be some people who are homeless but they are joining the cause. There’s nothing wrong with being a protester. I mean, heck, all these people here are the Time magazine Person of The Year.

DB:  The protester is Time magazines’ Person of The Year. Let me ask you, you’re in that community, you are a defender of these camps. You went to war, you risked your life, your thoughts on these cops using military weaponry to shoot down a veteran.

DB: If you wouldn’t mind I’d like you to sign off, do you perhaps remember your dog tag number, or if you have information, please sign off from the military side?

Dennis Bernstein is host and executive producer of “Flashpoints,” an award-winning radio show heard over Pacifica radio and originating from KPFA, 94.1, in Berkeley California.