Zionist extremists are determined to expand the territory of Greater Israel by seizing more and more land from the Palestinians. But their haste has now led to clashes with Israeli military authorities, as Lawrence Davidson reports.

On Dec. 12, hundreds of Israeli settler fanatics besieged an Israel Defense Forces base on the West Bank, destroying equipment, setting fires, and even stoning soldiers, the second such attack in a month.

The cause? Anger over the army’s dismantlement of a small number of isolated, unauthorized settler outposts. The Chief of the IDF’s Central Command, Major General Avi Misrahi, is quoted as saying, “I have not seen such hatred of Jews towards soldiers during my 30 years of service.” He must not have been looking.

This was not an exceptional event. The subsequent indignation over the attack expressed by Prime Minister Benjamin Netanyahu (“red lines have been crossed, he declared”) was, as Alex Fishmanwriting in Yedioth Ahronoth put it, staged hypocrisy. 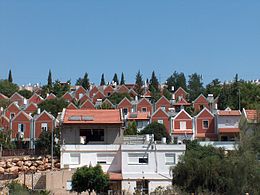 A Jewish settlement in Ariel on Occupied West Bank, or what Israelis call Samaria

The Prime Minister is certainly aware that for some time there has been on-going skirmishing between the settlers and government security forces. Right-wing settlers regularly throw rocks and fire bombs at police and army vehicles and “physical altercations” between settlers and Israeli police and soldiers are “almost routine.”

This is so despite the fact that the government, both Prime Minister and Knesset, “either tacitly or openly” support the settlers. Then why the hatred and why the attacks?

At this stage the battle is over strategy. The Israeli government wants to gobble up all of Palestine in an orderly step by step fashion. In part, this is to avoid too much international criticism at any particular stage of the process. On the other hand, the hard-line settlers don’t give a damn about international opinion no more than do Islamic extremists to which some of the settlers have an unsavory resemblance.

Led by fundamentalist religious leaders who do not recognize the state of Israel and its laws, they are driven by religious fanaticism and have no respect for governments or their agents. It is their ideological conviction that all of Palestine (including, by the way, Jordan) must be Jewish as soon as possible.

The authorities sometime get in the way of this goal and that has led the settlers to, as Fishman puts it, “terrorize not only the Palestinian population but also the police and the army.”

Netanyahu, belatedly noticing an erosion of government authority, has begun to set rules against settler violence when it is directed toward the IDF and police ( but not toward the Palestinians). The New York Times reports that from now on such “radical Israelis” attacking soldiers or policemen will be treated just like “Palestinian militants.” That is they will be “detained for long periods without charge and tried in military courts.”

Alas, this new toughness won’t work. For years Israeli governments have looked the other way as thousands of armed religious fanatics organized themselves and got stronger and more self-assured.

Now, as Adam Keller of Gush Shalom tells us, “the Golem has turned on its creator.” These are the people who assassinated Yitzhak Rabin. What makes Netanyahu believe that Israel’s present army, police and courts which, reminiscent of the Weimar Republic, regularly show sympathy and leniency toward these criminals, are going to change their attitude on his orders?

When a military reporter asked a brigade commander if he was prepared to act toward settler hostility in the same manner as he would Palestinian hostility, he answered “you would not expect me to open fire on a Jew. … I am certain you didn’t mean that.”

The reporter would have gotten a very different answer if she had asked the fanatic settlers about how far they were willing to go. Anshel Pfeffer writing in the Israeli newspaper Haaretz notes that “the only red line that has yet to be crossed is a scenario in which an Israeli citizen [belonging to] the extreme settler right would open fire on IDF soldiers. There are those in Israel’s security forces who fear that day is not so distant.”

Netanyahu’s apparent change of heart comes too late. What we have here is incipient civil war. Any really serious effort to stop these fanatics will result in their turning their weapons on those who represent the government. What you sow is what you reap.

This climate of internecine hostility contaminates the Jewish Diaspora as well. There is no rock throwing or armed men threatening violence, but the hatred is there. Jewish critics of Israeli behavior are categorized as “Israel-haters” or, alternatively, “self-hating Jews.”

This is often expressed with the same vehemence displayed by Israel’s settler fanatics. And, indeed, those pointing fingers in the U.S. are often supporters of the extremists on the West Bank.

Last week, Howard Gutman, the U.S. Ambassador to Belgium, addressed “a group of European Jewish lawyers gathered … to discuss anti-Semitism.” Gutman told them that there were now two different kinds of anti-Semitism: a “classic” type that is “directed against Jews for being Jews” and “a newer form” that is a product of “the Israeli-Arab conflict and can therefore be mitigated by reducing Israeli-Palestinian tensions.”

This is actually a conclusion that was reached by Israel’s Defense Ministry as early as 1994, but that didn’t matter. When Gutman’s statement became public “the long knives” came out “for another Jewish liberal who committed the sin of stating the uncomfortably obvious truth about a causal relation between Israeli policy and Muslim anti-Semitism.”

Despite these virulent reactions, Jewish criticism of Israel is growing quickly and this creates a frustrating dilemma for the Zionists. The pro-Israeli blogger Steven Plaut describes this situation in catastrophic terms: “Jewish anti-Semitism is all around us, part of the political air we breathe, a modern disease. In the twenty-first century the world is experiencing an explosion of it, a virtual plague.”

However, none of this Zionist extremism can be dismissed as a passing phenomenon. It has been with us too long. In fact, it has been with us since 1917 and the Balfour Declaration. That is when a certain segment of European Jewry began its obsessive drive to create and maintain a state for one group only. It was then, and continues to be an inherently racist project.

Ideologies, like Zionism, that support such projects usually reject all opposition. And opposition from erstwhile members of the in-group is the very worst because it exposes the false nature of claims of ethnic, religious or racial solidarity.

When and if Israeli society comes to its senses and decides to rid itself of the Occupied Territories, the settler fanatics will resist “fanatically,” and the civil war that is now incipient will release its full potential violence. When and if that happens, there will be repercussions for U.S. and European Jews and they too may well entail violence.

It would seem that the people chosen to be a “light unto the nations” have only managed to create another badly flawed nation state one with a preference for apartheid policies. Zionism said, “let modern Israel be” and, pop, the light went out.

16 comments for “Zealots for Zion”