The Republican presidential race has had many jaw-dropping gaffes and fumbles, but perhaps most shocking is the thought that the extreme policies on display might actually come to pass, offering what Lawrence Davidson sees as the strongest argument for supporting President Obama’s reelection.

There has been a steady drumbeat of criticism leveled against the Republican presidential contenders as they have gone around the country holding their debates and distinguishing themselves as shallow, ignorant, hypocritical and mendacious.

At these debates, the only ones who show themselves more discreditable than the candidates are those in the audience. Here is some recent criticism: 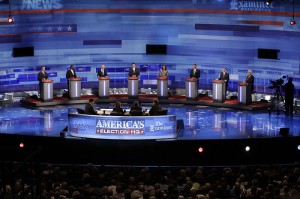 Republican presidential candidates at a debate

Marc Pitzke, writing in the German Der Spiegel Online, tells us that among the Republican primary hopefuls:

A. One thinks Africa is a country (Rick Santorum) and another thinks that the Taliban has moved into Libya (the now defunct Herman Cain).

B. Rick Perry falsifies President Obama’s opinions and statements with impunity while exaggerating his own achievements claiming to have created a million new jobs while the actual number, according to Pitzke, is 100,000.

C. Mitt Romney, the Mormon who would lead a political party which must rely on millions of Christian fundamentalist votes, is touted as an economic expert, but Forbes Magazine describes his proposals in this area as “dangerous.”

D. Newt Gingrich (who the Washington Post has called an “idea man”) is, according to Pitzke, full of “lousy” ideas. For instance, the man’s public suggestion that U.S. child labor laws be altered so that school children can clean their schools at the expense of often unionized janitors.

Pitzke writes, “Gingrich claims moral authority on issues such as the ‘sanctity of marriage’ yet he has been divorced twice. He sprang the divorce on his first wife while she was sick with cancer. … He cheated on his second wife [an affair with one of his House aides] just as he was pressing ahead with Bill Clinton’s impeachment during the Monica Lewinsky affair.”

Even worse will certainly come if Gingrich reaches the White House. Speaking at the Jewish Coalition Candidates Forum on Dec. 7, Gingrich pledged to make John Bolton his Secretary of State. Bolton is a vulgar warmonger certainly one of the most dangerous of American’s neo-conservatives.

[Gingrich also told the Jewish Channel that he doesn’t believe Israel should accept a Palestinian state because “we’ve had an invented Palestinian people, who are in fact Arabs and were historically part of the Arab community. And they had a chance to go many places.”]

All in all Pitzke thinks the Republican candidates “traipsing around the country” as if part of a “traveling circus” are “ruining the reputation of the United States.”

He is not alone in that opinion. David Remnick, the editor of the New Yorker Magazine, and ipso facto a representative of the U.S. intelligentsia, has remarked that the Republican candidates collectively mark “a starting point for a chronicle of American decline.” Remnick observes that:

A. Rick Perry displays an “inability to answer a simple question with a coherent reply.”

B. Mitt Romney possesses a “spooky elasticity, his capacity to reverse himself utterly on one issue after another.”

The New Yorker editor concludes that the “spectacle of the Republican field is a reflection of the hollowness of the GOP itself.”

This “hollowness” seems to be tempting others to jump into the race. Yet they are certainly no better. For instance, there are rumors that Sarah Palin might change her mind and come into the fray.

And Donald Trump has repeated his determination that “if Republican primary voters can’t pick a candidate he believes will beat President Obama, he’ll run for president himself.” Trump dismissed the two Republican candidates who, now and then, make sense (Jon Huntsman and Ron Paul) as “joke candidates.”

The media seems to agree with him for these are the two who have gotten almost no air time either during the debates or after them (despite Paul’s relatively strong showing in polls). When it comes to the Republican primary, the media seems to be dancing to that old Judy Garland tune, “Be a clown. … All the world loves a clown.”

One might wonder at such bizarre performances from folks seeking the most powerful job in the world. However, what is more bizarre still is that most of them are simply projections of their audience who are, in turn, representatives of the so-called Republican base.

There is something at once humorous and horrifying about the audience at these debates. Their cheers and jeers reflect attitudes that used to be restricted to drunken fraternity parties and out-of-control soccer games.

Who are these people with whom the Republican hopefuls now identify? They appear to be Tea Party adherents along with an unhealthy admixture of xenophobes and Social Darwinists. Research into the Tea Party element tells us that they are:

2. Whose concern about big government is “hardly the only or even the most important” of their issues.

3. They have extremely “low regard for immigrants and [with the possible exception of the by-gone Herman Cain] blacks.”

4. They are extreme social conservatives “opposing abortion” and demanding that “religion play a more dominant role in politics.” In fact research shows that a desire to infuse politics with religion is the most common demand of these people.

Americans who meet this description make up about 20 percent of eligible voters. However, keep in mind this number goes up when looked at as a percentage of voters who actually cast a ballot. In other words, these radicals are more motivated to vote than the moderates.

Sadly, these types of people have always been with us and probably always will be. A lot of us are, to one extent or another, alienated from the society we live in, but we learn to cope. These people do not learn to cope. Therefore, their alienation festers and the resulting anger turns them against all who are different: immigrants, gays, ethnic and racial minorities, intellectuals, secular folks, union members, etc.

They find their ego strength in the illusion of self-reliance. They see themselves as the real traditional Americans, the survivors, the ones who are strong enough to stand on their own two feet. Anyone who cannot do this is “unfit” and, like the hypothetical ill fellow without any health care insurance, should be left to die.

This Republican base makes up a community apart and they detest the idea of paying taxes so that others in need can receive social services. They are macho, they hate the enemy any enemy no questions asked. Someone out there (maybe the Koch brothers) is trying to organize these people and convince them that politically their time has come. The Republican Party is their vehicle.

All things being equal that should mean electoral disaster (the ruination of the GOP) in November 2012. But, of course, sometimes all things aren’t equal. Thus, with disappointment in President Barack Obama running so deep among America progressives there is no telling how many of them might sit out the 2012 election.

Even though progressives alone do not win elections, their numbers count if things get close. Thus, it is possible, if not probable, that a crazy right-wing president (one even more shallow, ignorant, hypocritical and mendacious then George W. Bush) could be elected. If that happened it could mean ruin for the nation and disaster for the world. Here is why:

1. Such a president would almost certainly take the country into another full-fledged war, probably with Iran and therefore the Shiite Muslim world. They would continue to comply with Israeli wishes without question further alienating the majority of people in the Sunni Muslim world.

U.S. state violence and terrorism will increase and breed reciprocal terrorism in the Middle East. Therefore, more 9/11 style episodes could be expected. The new president’s tough guy attitude would no doubt spill over into policies toward Russia and China. The United Nations and international law would be discarded (to say nothing of the general practice of diplomacy) and torture would again be a standard procedure for clandestine American government operations.

2. Domestically such a president would hack away at all government agencies except those involved with the military, police bureaus (FBI), intelligence and the courts. Social services would go by the boards as would regulatory oversight. The natural environment would deteriorate. The gap between rich and poor would grow and grow while the middle-class would shrink and shrink.

Marx’s predictions for capitalism would come back into style on the Left. Essentially, a new age of Social Darwinism would dawn. Poverty would increase, racism would return to the public realm and urban riots would probably come along at some point as well. A new depression would be a real possibility.

By the time the nation’s voting citizens came back to their senses, it might be too late because by then civil liberties would be a thing of the past.

In a real sense, it is the voters’ choice in 2012. Which do they care to ruin the Republican Party or the USA? There can be no doubt that voting again for President Obama would require strongly holding one’s nose. However, voting for his Republican challenger (or staying home on Election Day) may well kill you and many others.

8 comments for “GOP Clowns Take Over the Circus”